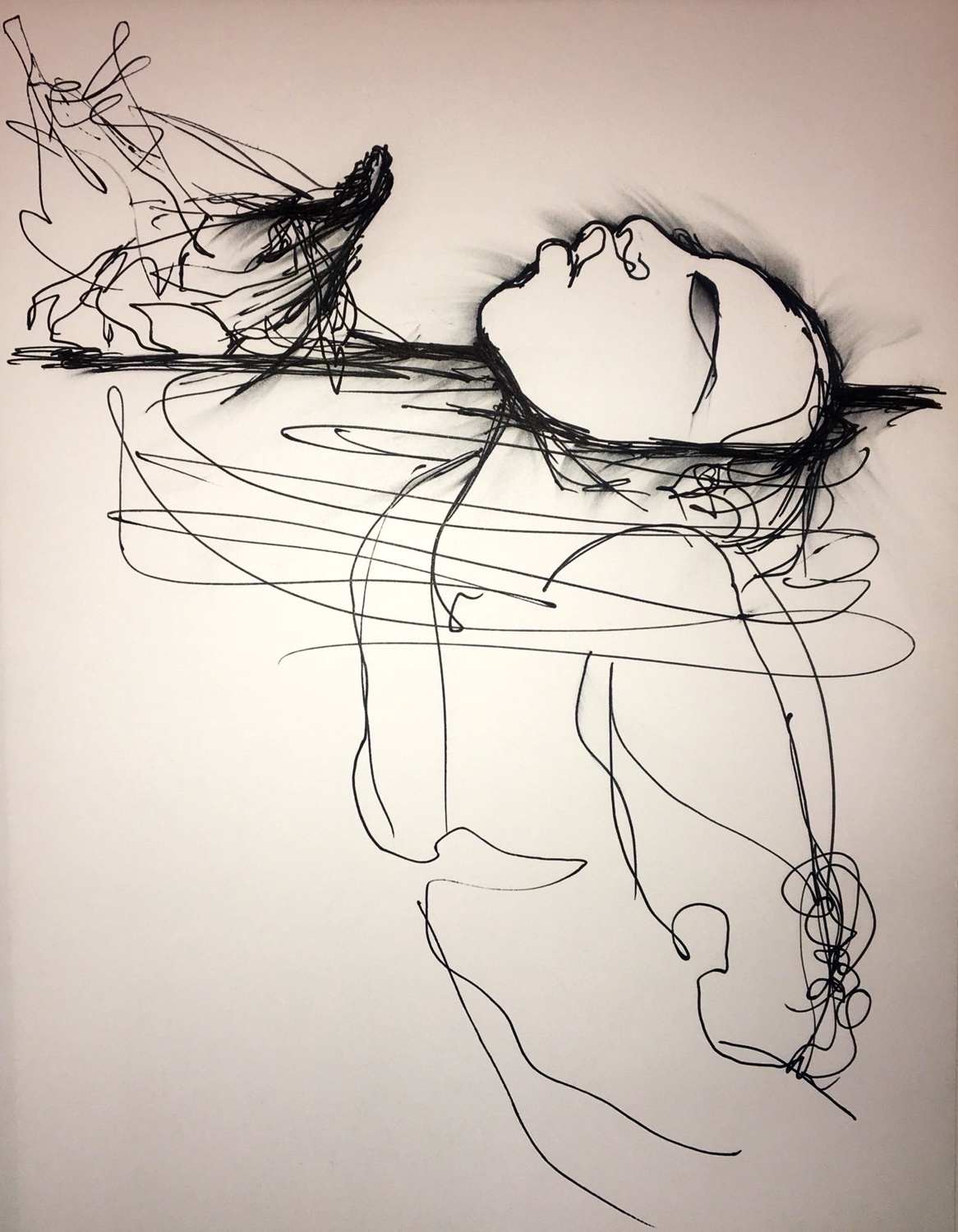 By Courtesy of Lee Zimmerman
By Maxwell A. Gillmer, Contributing Writer

My name is Sam.

That is not my name.

They don’t want us to survive. They eat our names first. Afterwards, they sign our graves with the names of no ones. They spit with disgust. Their hate twists the ocean. The ocean swallows the world. The world dies, and their business is in death.

Death is more than not living.

Death is the recognition of life.

Death is the suffocation of life.

We make ourselves brothers and sisters. We find the lines in the cosmic skies. It’s the only way to survive when they eat your name.

I don’t know anywhere other than these planks. Wood whispers like death wandering when locked between sea and stale air.

There are no stories. There is nothing to explain when there is no world. They did it to destroy our world and to destroy us. The endless periods of light and dark suspend us in a gap in the universe. Spacelessness removes us from the world. It’s what they want. It becomes easiest to cultivate death in bodies trapped in nowhereland.

There are twenty five of us, two always chained together. I am chained to my brother. Our ankles have no skin. We dance to move, and the twenty men who command the waves tell us how to dance. We dance in shit. We dance in piss. We dance in front of the guns. There are thirteen. One for each pair. One for the lone man. They hit him for fun until he pisses onto the wood that cries at night, but his back never breaks.

We don’t cry at night. They don’t like that. I listen in the dark and wish it was me.

It’s not just us in the dark. It’s spices too. And gold. That’s where we came from. Those white sands reek of gold and bodies with no skin. At least they are still alive. Except for those who aren’t.

It makes us like spices, like gold. Only their eyes don’t glimmer at the sight of our skin like they do at the gold in their hands. Their eyes burn a fire of greed that blows the boat forward. I don’t know how much longer we have until we die. My world is already gone.

The wind smells a bad smell, the smell if you fish on a Tuesday, the smell of a great disaster, a smell no one, not even the men who burn with greed, can chain.

Footsteps sound fast above us. Soft thuds of rain grow louder and harder and faster until I can barely hear the voices of men shouting through the wood. Water pools at our feet. It stains with the piss and shit that’s dried to the boards. None of us below speak.

Shouts come. The hatch opens, and a dark sky shines down from above. The men snatch crates filled with gold and spices. They yell things at me. One brother pisses himself, only this time from no switch. The men steal the crates and hurry back to the deck.

The open sky screams when I peek my head from the still-open hatch. The mounted guns point to the sky and to the water, but they can’t threaten life they cannot kill. From across the ledge of the boat and through the thrashing waves, a world emerges. I know it’s not my world. My world is already gone.

The men throw crates into a small boat in the middle of the deck. Fire cracks from the sky. Water reaches up from the side and tries to pull us down. The men only care about their crates of gold.

My brothers and sisters scramble around the deck. The boat tilts down to the left and begins its descent into wordlessness. There is nowhere for us to go but down.

Two sisters halt in the loud darkness. They speak through their eyes, and the water swallows them.

My brothers and sisters look at each other, their eyes saying the same thing. One bloodied pair after the other falls into the sea. No one is there to tell us how to dance across the waves. Bodies glimmer in the light of the fire in the sky. The fall is the only hope they have to keep from collapsing in the destruction of the false world outside of worlds.

The little boat crashes into the water. Before I see the faces of the twenty men, my brother pulls my chain and me off the ledge now lifted towards the sky. I don’t want to die. I never wanted to die. They want my death and my body too. Now they have neither. But this doesn’t solve the story.

No one has anyone.

Not here. Not in these waters.

Just before I fall under the second layer of black skies, I peer through the crashes of the foaming water. My lone brother who is chained to no one bobs near the little boat. He’s the last one I can see. Everyone else is gone. He struggles to grab onto the edge of the little boat. I don’t flinch when the man above him breaks the wooden oar against his face. The water doesn’t change color. It’s already stained with blood.

All of that piss and shit for nothing.

We dance below the waters, this time the shackles don’t hurt so much against our raw bodies, this time we dance for no audience. No men, no women, only the rotting bodies of imputed souls lying at the bottom of the world of no worlds. I dance to find my soul.

They eat my name, but someone will find it again.

—Maxwell A. Gillmer's column “Death Business” is an anthology of short stories, recounting fictionalized narratives inspired by true entries from the Trans-Atlantic Slave Trade Database. Each installment follows the story of a new individual — some named, some unnamed — on a different voyage from Africa to the Americas. This installment is based on the vessel “Friends,” Voyage ID: 77081