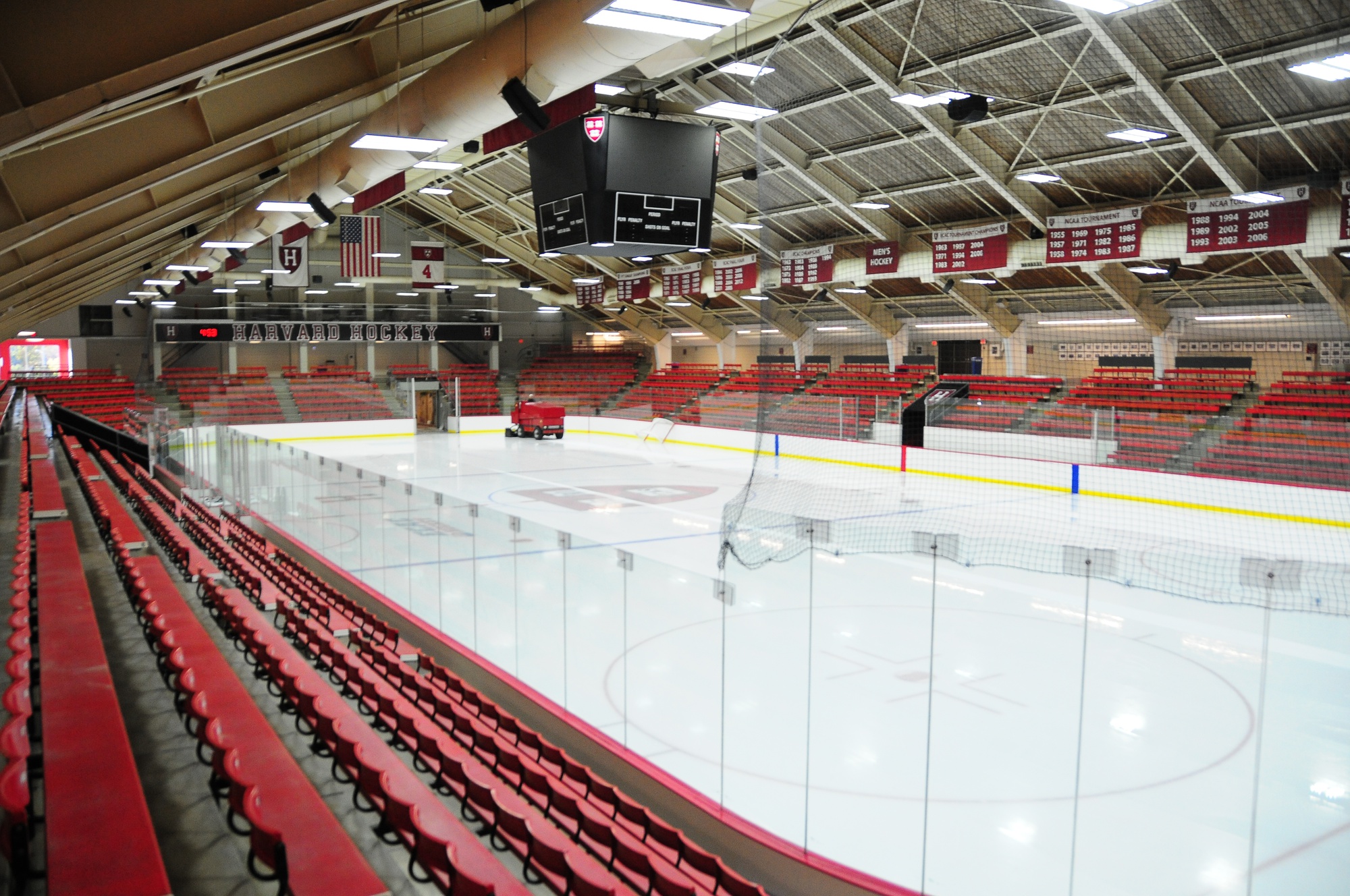 The No. 14/13 men's hockey team has experienced a revival this season, but the student fan base has not.
By Jake Meagher, Crimson Staff Writer

“Neither chicken soup nor hot cocoa can cure cold-related illnesses the way a few tickets to see the Harvard hockey team play at Bright Arena can.”

Believe me, this quote didn’t come from my tape recordings.

Rather, this was a statement made by former Crimson writer Tracy Kramer ’92 at the end of a piece she published in March 1989—a time when Harvard hockey had a spot in the national spotlight. A time when hundreds of students lined up in the cold for tickets because they knew their school was on the verge of something special.

These dedicated students came to be known as the “Harvard Hares,” notorious for wreaking havoc on Crimson opponents, regardless of whether their services were required halfway across the country or right in their own backyard. Just a year ago, my fellow co-writer Michael Ledecky read Kramer’s piece and scoffed at the idea of such a crowd still existing today.

But that was then. This is now, right? Ledecky’s analysis came on the heels of a dismal 2013-2014 campaign for Harvard that concluded with Yale sweeping the Crimson off the ice in the opening round of the ECAC tournament. This year, Harvard has caught college hockey by surprise, at one point climbing as high as fourth in the national polls and first in the Pairwise rankings, which predict the NCAA tournament seedings.

Yet, I continue to scoff.

In a season that has had it all—an eight-game winning streak, three wins over top-10 teams, a double-overtime Beanpot thriller, a legitimate Hobey Baker candidate in junior forward Jimmy Vesey, a revitalized presence in the crease in junior Steve Michalek—there has only been one thing missing: the fans.

Maybe I dwell on their absence because I grew up on college hockey. Captivated by Boston College athletics as a kid growing up in Massachusetts, I idolized the “SuperFans” at Conte Forum. Additionally, having an older cousin who attended Northeastern granted me access to the Doghouse at Matthews Arena, one of the most passionate student sections I have ever seen live in action.

Consequently, I have always bought into that Bostonian mantra that there is nothing quite like the first two Mondays in February.

Now that’s a quote I can take credit for transcribing. This is not 1989 anymore. Sadly, the above statement provides a more accurate representation of the current Harvard hockey scene than does the testimony of Ms. Kramer. When I covered the Crimson’s first-round classic against Boston University two weeks ago, the majority of roars from the crowd following Harvard goals came from BC and Northeastern fans who had made it to their seats early. As for the Crimson student section? See the above quote.

With 21 points on the year, Harvard currently sits fourth in the ECAC, needing to stay right where it is in order to claim a first-round bye in the conference tournament. However, to do that, No. 14/13 Harvard will have to fend off five teams in nine days. The last time the Crimson played that much hockey in such a short time interval, the team lost four straight.

As those defeats began to pile up, Harvard watched its stock fall from a national title contender to a team on the bubble of making the NCAA tournament. If the city had not been doused by nearly two feet of snow over that weekend, the Crimson would have had to face BC two days after suffering its fourth straight loss. It could’ve been even worse.

But the cold never bothered Harvard anyway. With “Frozen on Ice” occupying TD Garden for nearly two weeks, the Beanpot organizers had no choice but to postpone the second round of the tournament to Feb. 23. Finally able to catch its breath, the Crimson responded by picking up three points over the weekend, getting back on track as it looks to earn a bye in the first round and home ice advantage in the second.

But does home-ice really mean advantage? Just last Saturday, Cornell packed more fans into the Bright-Landry Hockey Center than the Crimson did. And in Harvard’s last home playoff game back in 2012, against Yale no less, 801 people showed up—less than a third of the arena’s capacity.

Right now, if you enter “Harvard Hares Hockey” into a Google search engine, you are not going to find any results depicting screaming Crimson fans. Instead, you’ll get the following: “Did You Mean: Harvard Hates Hockey?”

Admittedly, I laughed upon reading this, but I know it’s not true. Harvard hockey has one of the most passionate alumni bases in the nation. However, it is time for the student population to catch up. It is time for the Hares to return.

—Staff writer Jake T. Meagher can be reached at jake.meagher@thecrimson.com.