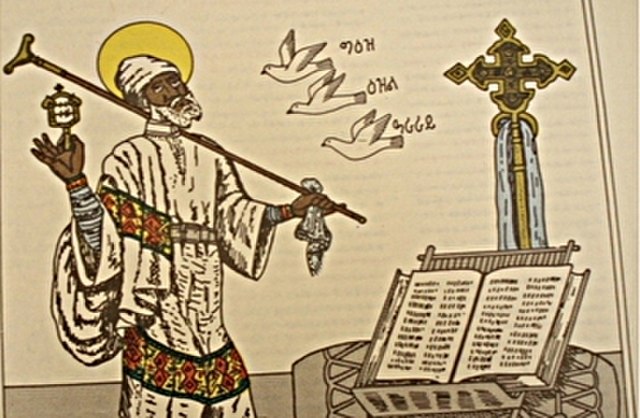 The Western hemisphere is familiar with musical giants like Beethoven and Mozart and the beautiful compositions they left behind on the five-lined staves in treble and bass clef. Yet long before this form of musical notation began in the West, there was a composer in the horn of Africa who had created his own notational system and had established a tradition of musical pedagogy that would continue to this very day. His name was Yared.

Yared lived in the sixth century during the height of the Aksumite Empire, what is now Ethiopia and Eritrea. Like many early composers, Yared was a religious leader and a scholar of the Ethiopian Orthodox Church. He is most known for devising an eight-note (and later ten-note) notation system of music, which could form three different melodic categories. With the involvement of Ethiopian instruments such as the cistrum, (known in the ancient Ethiopic language of Ge’ez as ጸናጽል, the staff (መቋምያ), and the drum (ከበሮ), he spent the majority of his life composing thousands of hymns and teaching his students his notational system. This eventually led to a complex system of oral tradition and musical pedagogy known as “abinet” or “fatherhood,” which has lasted for 1500 years and is still present today.

Before going into detail about the music of Yared, or about the ancient traditions of his music, it is important to first grasp the most foundational aspect of “Yaredian” music: its worldview. Yared is considered not only an important figure in Ethiopian history, but a legendary figure with a miraculous story. This is indicative of the hagiographical approach Ethiopia takes to her heroes.

The story of Yared starts with the tale of his life as a young student. We are told that as a young man, Yared traveled to Aksum to learn religious studies from his uncle. After failing to keep up in his studies for six consecutive years, Yared retreated to a nearby forest. Yared, in his desperation, found the endurance to continue by looking at a caterpillar. It was in the seventh year that the legend states that Yared’s mind was opened and he was able to grasp what was taught and become a learned scholar. This leads us to the legend of how Yared discovered his musical inspiration:

This story takes us to the center of the Yaredian and one might say Ethiopian philosophy of music. It tells us that music does not come from within us, but reveals itself through us after descending from on high. It is the three birds, each representing a musical mode, that give Yared his musical inspiration. This is the essence of the legend of Yared. The name Yared itself means descension, a reference to how the music of heaven descended down to the realm of humanity. Yared becomes a prototype of the musician who must elevate to the higher realm to gain inspiration, and must make himself submissive to the inspiration. While Yared is considered a real person, the hagiographical approach to his life makes his story an allegory of a deeper message.

In Ethiopia, the melodies of Yared are not just considered beautiful but literally heavenly. This understanding serves as a fundamental tenet to the religious pedagogy of Yaredian music. The scholars who teach Yaredian melodies are careful to make sure that every note is sung correctly, without distortion, out of respect for where it came from. In the Ethiopic language of Ge'ez, the verb ቃነየ meaning “to present music,” and the verb ተቀነየ meaning “to submit” both sound and look virtually the same, an intentional similarity. Music is at its core an act of submission to inspiration. We let the art guide us, instead of us guiding the art.

Yaredic music is said to create a form of contemplative ecstasy, in which the music they are singing gives them a kind of out-of-body experience to the point that they have no awareness of their surroundings. This is based on another legend of Yared, which recounts how when Yared was presenting his melodies to the Emperor of the Aksumite Empire, the two of them both experienced a trance-like state. During this, the Emperor unknowingly impaled Yared’s foot with his staff, a fact which they only realized after Yared had finished singing.

The transcendent approach to music in the Yaredian worldview suggests that music is eternal. The legend of Yared doesn’t end with his death, but concludes that he was hidden away and is still alive. This is a common way to end a legend in Ethiopian culture as it makes the figure’s contribution immortal. Just as Yared’s music lives on, he does too — in the legend, and in his music, which is still of paramount importance today.

While Yared’s music has lived on in the local regions of Ethiopia and Eritrea, it has not gained the acknowledgement it deserves by the rest of the world. Though there are a minority of academic scholars who have analyzed his work, the attention given to him does not compete with his Western counterparts. It’s time for admirers of the arts to give Yared his due. We may not have traveled to heaven and back, but we can step into a different world and culture through the melodies of Yared.

—Mihret Melaku’s Column, ‘Three Little Birds: Yared’s Inspiration From Above’ is about the Ethiopian composer Yared and his musical notational system.