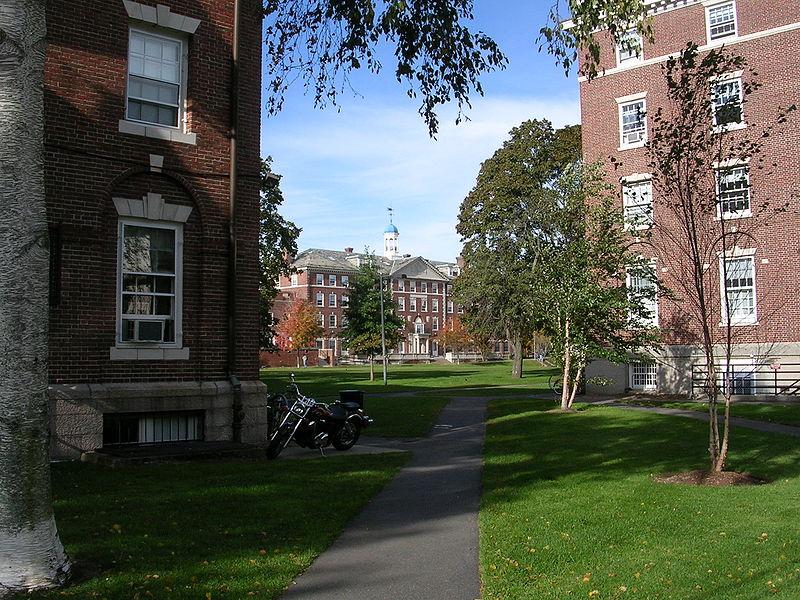 Although if you ask River folk about Cabot House, they’ll probably say it’s in another state, it’s actually just a ten-minute walk down Garden Street. Cabot offers spacious rooms, a great community, and a location that’s generally peaceful—although with two other Quad Houses within a few feet, it’s never hard to find a party.

Dining Hall: While it looks a lot like a concrete bunker from the outside, the interior of Cabot dining hall is cozy, and there are always seats available. The big windows overlooking the Quad let a lot of light in, and in the winter, you can watch the snow fall outside while drinking hot chocolate, which you can get at basically any time between meals because the drinks, cereal, and dessert are all outside the servery. Even if you want something more substantial between meals, you can usually convince a member of the dining hall staff to let you in, since Cabot’s dining hall staff, including the much-beloved Roy and Slavy, are some of the nicest around.

Score: +200 for atmosphere, -50 for outside appearance

Common Spaces: Most people go to the dining hall to hang out, but each of Cabot’s six buildings has its own living room. The Junior Common Room, used as the performance space for the annual House musical, is huge. It has a pool table and a huge TV room next door—which is sometimes used for House events, though it's usually empty. The House library is one of the nicest spaces to study, though it is a bit small. There are several comfy chairs in addition to a big table, and although the book collection is small, it’s open all the time.

Rooms: Cabot consists of six residence halls, four of which are connected by tunnels, which makes going to breakfast—or dinner—in your pajamas very easy. Two of these are mostly made up of large singles with hallway bathrooms, and the rest of the House consists of suites ranging from senior singles to one six-person crowded suite, although most of these are four-bedroom suites. If you want to live in a suite sophomore year, you will probably be placed in n housing, but there are many uncrowded suites for juniors and seniors. Almost everyone who requests a single will get one, which comes with the perk of having hallway bathrooms cleaned every day.

House spirit: Although some people come back to Cabot only to sleep, Cabot offers a very pleasant and intimate community for people who spend any time in the House. The House list is usually full of routine requests and announcements, but sometimes debates (most recently, one on pornography) get everyone riled up. House Committee-sponsored events usually are fairly low-key get-togethers, but there are a few big events every year, including a catered Festivus dinner and the annual Dutch Auction.

Score: +100 for nice events, -300 for low attendance and infrequency

Location: Cabot is in the Quad, which means that it’s farther than most Houses from the Yard. But as much as people complain about the distance to the Yard, it’s really only a shuttle ride away from everything. The Quad is its own tight community—Currier and Pforzheimer are both only a 10- or 20-foot dash away—and it has its own gym, the Quadrangle Recreational Athletic Center, where you can almost always find a machine when the Cabot gym cardio equipment is in use. The Quad also gives you access to a lot of cool places that most River House residents never see, including a lot of interesting restaurants on Huron Avenue and on Mass. Ave. in the direction of Porter Square.

Quirks: Cabot is the only Quad House that is actually on the Quad itself, so when the weather gets nice, Cabot holds frequent barbecues. The House also holds Senior Common Room dinners two or three times a semester, sometimes with musically inclined Cabot residents performing (recent performers have included cellist Bong Ihn Koh '08 and violinist Ryu Goto '11). The House also has some eccentric traditions, including the “lambing” of a House member at the annual Dutch Auction.

Score: +50 for barbecues, lambing, and all that jazz

Committee Ranking: 11 out of 12—not too great, but not as bad as you could be.