Remember When Your Were Accepted? Stories from the Early Action Class of 2016 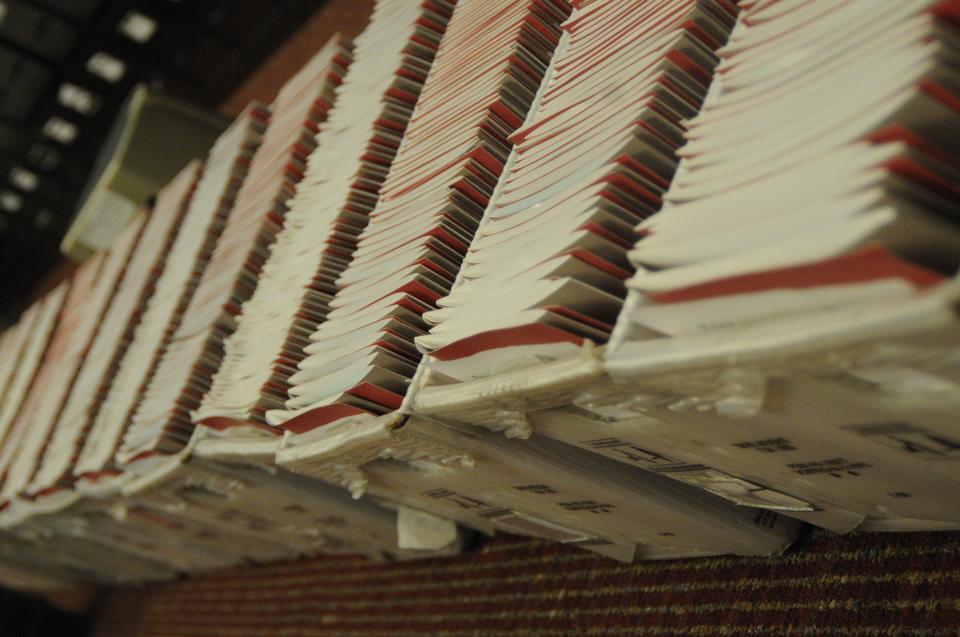 The admissions packets that will be mailed out to roughly 2,000 lucky applicants on Thursday, having already been assembled, await their departure on the floor of the file room. On Thursday, a mail truck will pull up to the back door of the admissions office, and students and staffers will hoist over 30,000 decision letters out the door—a fitting outpouring of paper in response to the huge volume of papers that cascaded into the office just a few months ago.

At 5 p.m. yesterday evening, 4,231 high school seniors received an email from the Harvard College admissions office that may determine the next four years of their lives, or at least whether or not they have to spend their winter vacations frantically writing college essays.

Of these 4,231 applicants, 772 were accepted to Harvard under the newly reinstated early action program. A few of them took a break from their revelry to discuss their happy news.

It was 3 a.m. Eastern African Time, when Karim Pirbay of Antananarivo, Madagascar, and his father decided to call it quits for the night and go to bed. Pirbay had been refreshing his email since 1 a.m. EAT, or 5 p.m. EST, waiting for the email from Harvard. As soon as his father went to bed, Pirbay received the email.

"I had to read the email four times because I didn't believe it," Pirbay said.

Pirbay said he immediately rushed into his parent's bedroom and began calling friends and family, including his sister Leila L. Pirbay '14, a Crimson photo editor. "It was hectic at 4 a.m."

Pirbay said he will not apply to other colleges. "Harvard has been my first choice since the beginning."

Pirbay is interested in studying computer science at Harvard. In fact, he has already created his own iPhone app, iLemur, an interactive encyclopedia of lemurs.

William S. Xiao of Atlanta was alone in his apartment when he received the email promptly at 5 p.m. Xiao said he dashed up the stairs of the building to a friend's apartment for a big celebratory hug. He said he then called his parents and sister Karen F. Xiao '14.

Xiao said he has also applied to Duke and MIT and is not positive he will be attending Harvard next year.

Ted C. Ko of Laguna Niguel, California was waiting with his parents in anticipation for the email, which he said came promptly at 2 p.m. PST. Ko said he rushed to call his brother George C. Ko '15. "Emotions are running high," Ko said.

Ko, who wants to be an engineer, said he was drawn to Harvard, as opposed to other colleges and universities with pre-professional engineering programs, because of Harvard's emphasis on collaboration and entrepreneurship. He plays alto saxophone and said he is also drawn to the music scene in Cambridge and Boston.

Nicholas L. Rosamilia of Philadelphia was at squash practice when the admissions office sent out the emails. Rosamilia said he opened the email on his phone on the train ride home with a friend, whereby his friend proceeded to tell everyone in the train car that Rosamilia had been accepted to Harvard. However, Rosamilia left his parents in suspense until he arrived home. He said his mother cried upon hearing the news because she was sure he had been rejected.

When asked why he decided to apply to Harvard early action, Rosamilia said he originally was against the idea, as his mother attended Harvard. However, he said he fell in love with the school upon visiting. "It felt like home."

That's all for now. Leave a comment with your own story, if you like. Oh, and congratulations, Early Action Class of 2016!