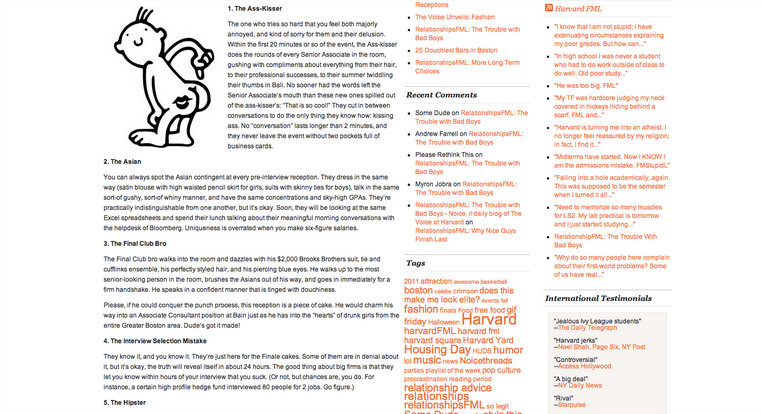 It's recruiting season, and that means suits, resumes—and racism?

In a blog post published Saturday evening, a writer for The Harvard Voice listed a catalog of satirical stereotypes about people who attend on-campus recruiting events for finance and consulting jobs.

Four were mostly inoffensive snark—"the ass-kisser," "the final club bro," "the interview selection mistake," and "the hipster." The fifth, however, drew some angry attention—"the Asian."

The writer described the Asian interviewee:

"You can always spot the Asian contingent at every pre-interview reception. They dress in the same way (satin blouse with high waisted pencil skirt for girls, suits with skinny ties for boys), talk in the same sort-of gushy, sort-of whiny manner, and have the same concentrations and sky-high GPAs. They're practically indistinguishable from one another, but it’s okay. Soon, they will be looking at the same Excel spreadsheets and spend their lunch talking about their meaningful morning conversations with the helpdesk of Bloomberg. Uniqueness is overrated when you make six-figure salaries."

After Harvard students immediately expressed outrage at the blog's language via social media, the editors of The Voice—a student life magazine that operates the blog Very Noice—removed all comments and blocked further responses to the article, changed the byline from "The Voice Staff” to “Anonymous," and replaced "the Asian" with a rewritten paragraph on "the super-interviewee."

At that time, the editors posted a note apologizing for the potentially offensive content. “Though the article was written by an anonymous contributor, we have removed the inappropriate content because it is not in line with The Voice's mission of promoting satirical, yet inclusive, content,” the note said.

They posted a note below that from the writer, which said, "Clearly, I've been censored, which in itself is an interesting reflection on free speech in America. If you couldn’t tell that this article was satire, then we have bigger problems than me being 'offensive.' (If you are curious to know what the censored stereotype is, just take a quick look around the room. JK!)"

All five posts on Very Noice since May have been written under the bylines "The Voice Staff" or "Some Dude."

April A. Sperry '13, listed on The Voice's website as one of two presidents and editors-in-chief of the publication last school year, declined to comment. Her co-president and editor Michelle B. Nguyen '13 could not immediately be reached on Sunday afternoon.

Tags
RaceOffice of Career ServicesStudent PublicationsCareers Harvard on the Web