Five Questions With 'The Buried Life' 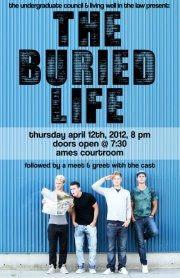 "Harvard is a great place because you have a lot of smart, ambitious people you can learn from, work with, and sleep with," said Jonnie Penn, one of four members of the project and MTV show "The Buried Life." In an event organized by the UC, the group spoke to a nearly full audience at HLS on Thursday. Embodying a refreshing blend of bro humor and antics coupled with the deeper pursuit to spread an empowering message, the boys discussed their New York Times bestselling book, good deeds, and breaking into the Playboy Mansion dressed as Oompa Loompas.

"The Buried Life" is centered on a bucket list of 100 things the group has collectively compiled—from being a knight for a day to asking out Taylor Swift. In every episode of the show, as they tackle one of their goals, they help someone else take on a dream of their own. The crack team behind the project is made up of Ben Nemtin, Dave Lingwood, and brothers Duncan and Jonnie Penn, hailing from Victoria, British Columbia. Their entire journey ultimately aims to ask and answer the weighty question, "What would you do before you die?"

Handsome, charming, and down-to-earth, the guys kept the audience laughing about adventures getting trapped in a wetsuit, riding a bull, and running Ebay for a day. They ended the presentation by asking everyone about their bucket lists: One freshman wanted to drive a ferrari wearing a tuxedo, while another student daringly asked and received kisses from all four guys. Two members of the gang, Jonnie Penn, sporting a scruffy blonde beard and burnt orange hipster glasses and Dave Lingwood, wearing a denim button down he later called his "Canadian tuxedo," sat down with The Crimson and spilled about how they really feel about Harvard, what their toughest goal has been to date, and why college is the time to uncover the buried life.

Penn: I got to sit in a law class last time we were here when we spoke at Northeastern. One of our employees is at HLS and she showed me around and I love it. I studied American History at school so coming here is like a great history lesson.

Lingwood: My father graduated from here and so I feel like I'm feeling his presence in every hallway I walk down, and I would have never had the chance to feel that presence otherwise. So I can come and seek and give the finger to my father [laughs]...daddy issues.

2. Flyby: Bringing it back to your show and book—how did you come up with this list of items and narrow It down to 100 things you were interested in pursuing?

Lingwood: We got on Skype and we wanted to make a project, wanted to make a film, and we just said if we could do a film on anything, what would you make a film on? So we went into our corners and came back with these long lists and we started telling each other what we thought would be a great thing and someone just said, "Why don't we go after every one of these things?" And then it was like if we were going to go after all these things, we should help people do things they do as well.

Penn: Our goal is to give people the feeling that they can do anything—especially college students. I think it's easy to fall into routine in any school you go to: I imagine that you have to play within the rules. You're in college to innovate, to come up with new stuff, to think outside the box. We never tell people drop out just for the sake of following your dreams, but the underlying thing is to shoot for the moon.

3. Flyby: A lot of the things you guys have done have been really crazy, what was the toughest one to accomplish?

Penn: Playing basketball with the President was pretty tough; that took two years. Making the show was hard. We worked our asses off, we were executive producers until we hired everybody, we were in the edit basement until 4 a.m. and it was our baby making the first two seasons. Growing a mustache has been very difficult. I've got a beard and Dave's working on it. Dave's working on bangs right now.

Lingwood: One of my huge fashion mentors is Todd from Wedding Crashers, so I'm really trying to capture that.

4. Flyby: The idea of doing something off your list and then helping someone accomplish something they want to do—was this for the show or something you've done from the beginning?

Penn: That was right at the beginning we decided to do that. When we started "The Buried Life," we were all in pretty dark places. My brother had just lost a friend, Ben was going through a little depression—

Lingwood: I got stuck in a tanning bed—

Penn: [laughs] No, Dave gained fifty pounds in a couple months and I was just broke, broke as broke can be and frustrated with the college experience, and because of that we wanted to get out of our own heads and get out of our own lives and explore. Asking other people what they want to do before they die felt like such a good way to do that.

5. Flyby: For someone who wants to embark on a journey like this, what skills do you need to take on this type of adventure?

Lingwood: One of the things we have found is if one of us individually tried to do "The Buried Life," we would have been toast, almost for sure. Embarking on projects with your friends or with like-minded people is a great thing because you have people to hold you accountable, to keep you driven. When you have success, you have people to share that success with and you're not there by yourself. Doing things with a great team of people around you is highly encouraged in my book.

Penn: We're alive in an unprecedented era. It is such a gift to be alive right now—all of the rules are off. Shoot as big as you can possibly think, and if it doesn't scare you to think about, shoot bigger in whatever field you're in. We've seen time and time again: the audacity of it, the audacity of hope [chuckles], you could say. You'll find a way to do it. I never would have thought we'd be here doing this, and you've got to trust what's inside you.