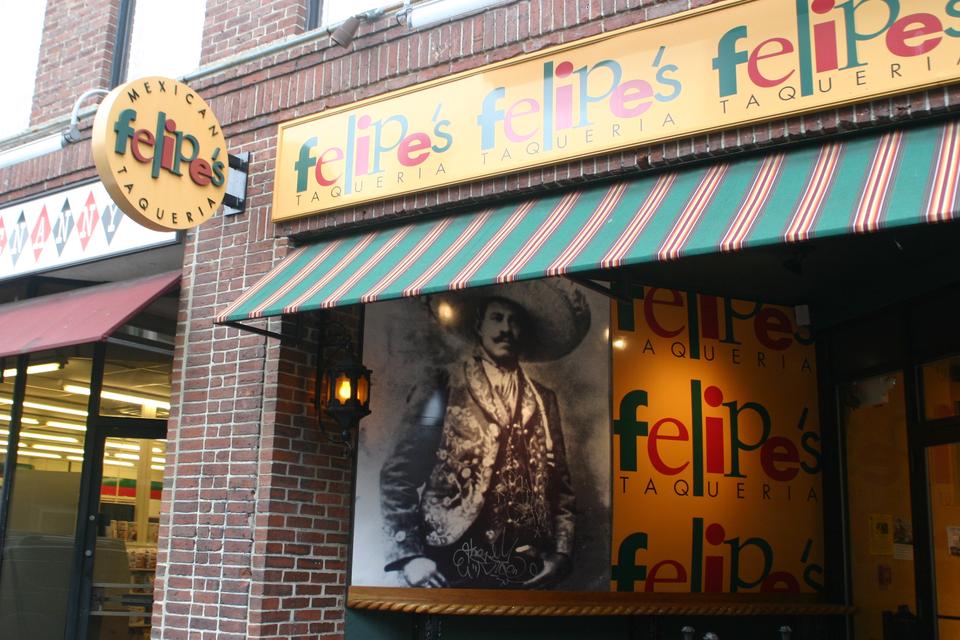 It's 1:30 in the morning, and you're hungry. But where do you go? It is a divisive debate among the Harvard student body, and loyalties to the Square's late-night stops run deep. Over an 11 day period, The Crimson will debate 11 popular choices around campus. Now up: Felipe's.

Imagine yourself in one of the following situations. You return from a rough evening at lab and need a boost. You’ve just perused Final Club Row and are ready to pig out. Or you’re just in the mood for beans and rice, and it’s too late for Chipotle, Qdoba, or Boloco. Enter Felipe’s, the premiere option for South-of-the-border eats come midnight, and not a bad choice among everything open and available at that time.

I say “not a bad choice” because it’s nearly impossible to realistically make Felipe’s sound like the best decision one can make before going to bed. As a rule of thumb, making a case for burritos past dinnertime is rather unwise. After all, late-night Mexican food gets a bad rap to begin with.

Actually, let’s back up a second—Mexican food in general gets a bad rep. One Crimson commenter (Felipe’s #1 Fan, at least by self-proclamation) advocated food from a certain Mexican joint in the area only if he or she “[were] in the mood for diarrhea.” Doesn’t really put you in the mood to eat, does it?

But let’s move past that for a moment. Don’t even look back at it. Continue with me to the comparatively innocuous benefits of Felipe’s after dark. First, it’ll fill you up. Basically, you won’t be tearing through a bag of Lay’s an hour afterwards like some desperate cannabis fiend. Second, it’s cheap. ’Nuff said. Third, the music. Who doesn’t enjoy a little banda while waiting in line?

And the last point is one which is often overlooked—it’s very easy to go and pick up Felipe’s. You walk in, you order, you walk out. No problem. You aren’t bogged down by the perpetually intoxicated congregation of the Kong. You aren’t stared down awkwardly as you decide what to get you are at Market in the Square. And you know what you’re buying, unlike whatever culinary dice roll Pizza Ring tosses into its discolored, vaguely rectangular box.

One of the few arguments I hear raised against a late Felipe’s run is the astronomical calorie count associated with the food. But let’s be honest—if you’re eating that late, you’re not worried about eating healthily anyway. Might as well go HAM and pick up some carnitas and Jarritos before calling it a night.

Felipe’s isn’t five-star dining, but it’s good eats before bed. And it’s probably one of the safest dining options in the Square at that time. For that, and for all the air-tight contentions above, Felipe’s is my clear preference for late-night food.

(At the very least, studies say that individuals under the influence of alcohol lapse into their secondary languages. Good news for the hungry bilingual drunkards out there—you’ll still suffer from slurred speech when ordering your super burrito, but at least it’ll be in the native tongue of many of the friendly employees.)