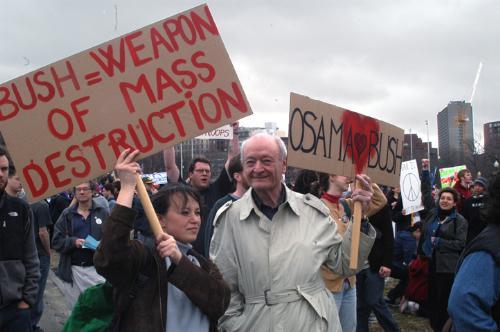 Protesters wave signs Saturday on the Boston Common to protest war in Iraq. Tens of thousands—including several dozen Harvard students—joined in the rally.

Do you remember back in 2003 when Harvard’s Housing Day revelries ended in a massive multi-collegiate protest against the Bush administration and the War in Iraq?

Probably not, because it never happened, but the local Channel 7 news certainly thought so. The news station broadcasted freshmen lined up outside Annenberg on the morning of Housing Day and mistook the festivities for a staged student walkout opposing the attack on Iraq.

Apparently, Harvard students would later join forces with students from MIT, Tufts, Boston University, and several other colleges, because of course, posters declaring “Pfuck the River” and a guy with a fish head was obviously pertinent to the Iraq war. Maybe they thought that Harvard students were attempting an alternate method of protest in which we joyously celebrate our cause with irrelevant festivities?

Mocking aside, Harvard can be very outspoken in its protests, so claiming Housing Day was another wouldn’t have been a bad guess. We’re sure there were a few newly ordained Quaddlings who were already protesting, anyway.