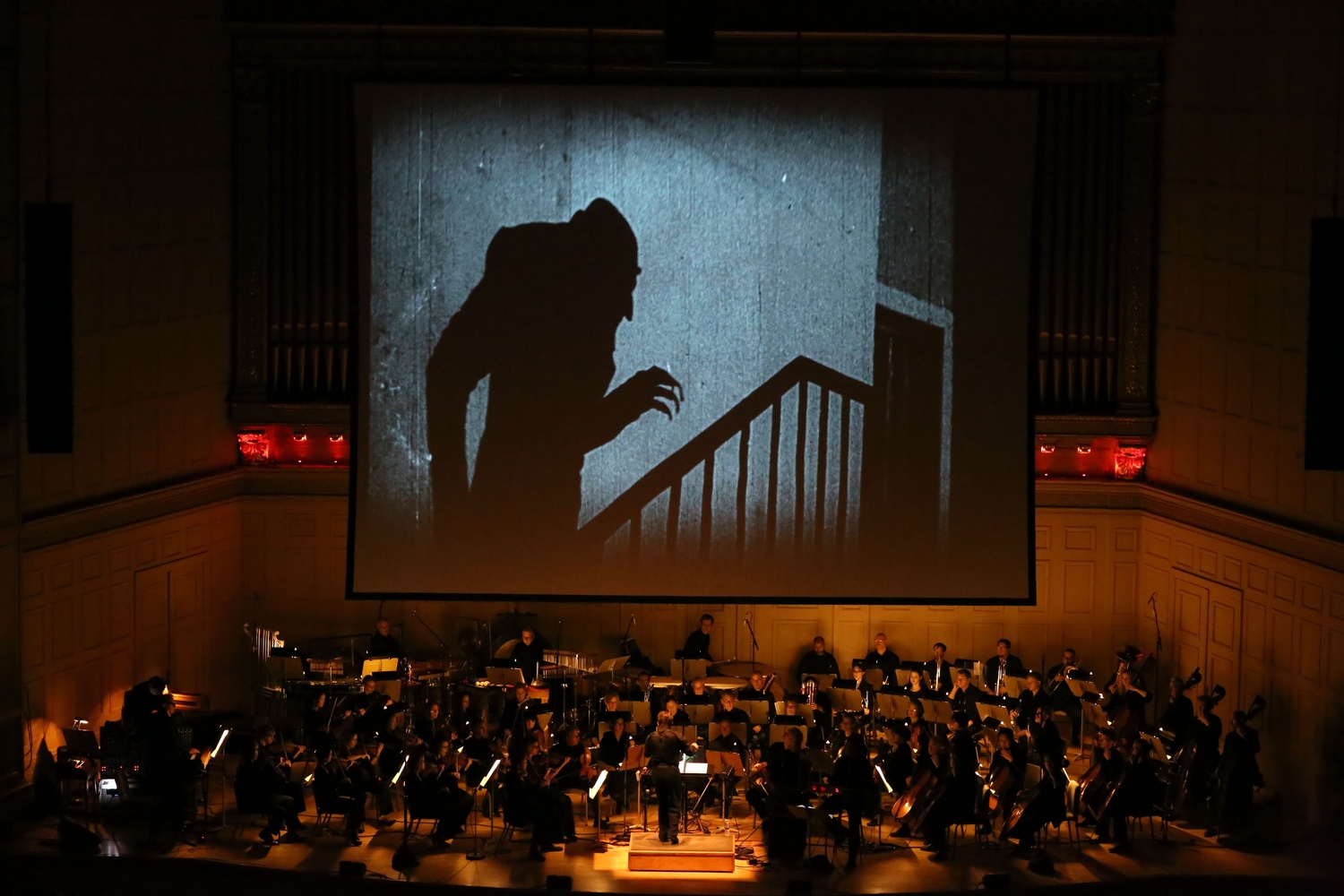 The Boston Pops Esplanade Orchestra and Berklee College of Music performed a live score along with a screening of "Nosferatu: A Symphony of Horror" on Friday evening. By Courtesy of Hilary Scott/Boston Pops

The night before Halloween, the Boston Pops accompanied the classic horror film “Nosferatu” with a brand new score composed by eight students from the Berklee College of Music. While this screening of “Nosferatu” revived the classic traditions of silent film, it also innovated upon the genre, using unorthodox instruments such as the Theremin and a modular synthesizer. This Roving Reporter ventured into this eccentric mix of Halloween horror to ask the composers, audience members, and even a theremin player what they thought of the screening.

Roving Reporter: Is there a scene where “Hotline Bling” can be incorporated into the score?

RR: What does Count Orlok [the vampire in “Nosferatu”] do when it’s not Halloween?

HM: I imagine he summers in France, where the steak is rare and the coffins have a Parisian flair.

RR: How do you think “Nosferatu” manages to be scary without all the blood and gore?

KC: It’s all about the psychology. We imagine the monster, and we tailor him to our fears. And after we have spent so much time coming up with the monster, we can’t help but feel invested in him.

RR: If you were a vampire, what would be your abode of the undead?

SG: My car. It gets pretty grungy and dark in there. It’s an all-black car, and I could really use that. It’s basically a coffin.

RR: Do you think Count Orlok is just a little bit misunderstood, or is he evil through and through?

DM: It’s hard to say. Maybe he’s just really lonely. He was cooped up in his castle on the top of the hill, and then he turns into the creepy old man across the street.

RR: Have you ever lived near a Count Orlok?

DM: Yes, definitely. Maybe we all have our Count Orloks near us.

RR: Which politician does Count Orlok most remind you of?

TN: I would say Ben Carson because he’s so sedate and slow-moving.

RR: What ideas of horror did you try to incorporate into this film score?

WH: The score has to be spooky…. It’s an old movie—the special effects aren’t that great, so we had to make up for that with the music.

RR: What musical techniques did you use to create this “spookiness?”

EJ: A lot of our scary effects come from extended techniques on all our instruments. We used horn flutters for the werewolf’s howls. We used string harmonics, and we tried to get a little bit of the “Psycho” flavor into the music to make the really scary moments happen.

RR: What scene was the best part to compose for?

MM: My favorite part was reel three, which was when Thomas Hutter is having dinner for the first time in the castle. All the things that are happening…are so exciting because we finally get to see Nosferatu.

RR: If you could incorporate a pop song into the score for “Nosferatu,” what would it be?

AC: A pop song. Wow…It would have to be Britney Spears’s “Toxic.”

RR: Did you have any input into the theremin part of the score?

RS: Theremin players are few and far between, so the composers can write the parts for it, ]but it’s not always sure if it’s going to work until you get a real theremin player there. It can make sense on paper, but it might not necessarily speak well, so you have to tuck stuff in there and try to do things that work well on the instrument and let the instrument speak.

RR: What voice does the theremin add to the score?

RS: It’s the creepy instrument! It has a long history of being a creepy instrument, and what you do to make it creepier is you play with a faster vibrato…because the theremin really can be very pretty.

RR: So, it’s pretty, but can it go so far as to be romantic?

RS: Yes, I got a girl with the theremin.

RS: Yeah, I met this girl who was doing all these avant-garde plays, and this is when I had first seen a clip of someone playing the theremin. And I thought, “If I can play this instrument well, I bet she’s really going to like me.” So I learned to play it…. Look, lust and love are big motivators when it comes to—

RS: Anything! When doing anything!