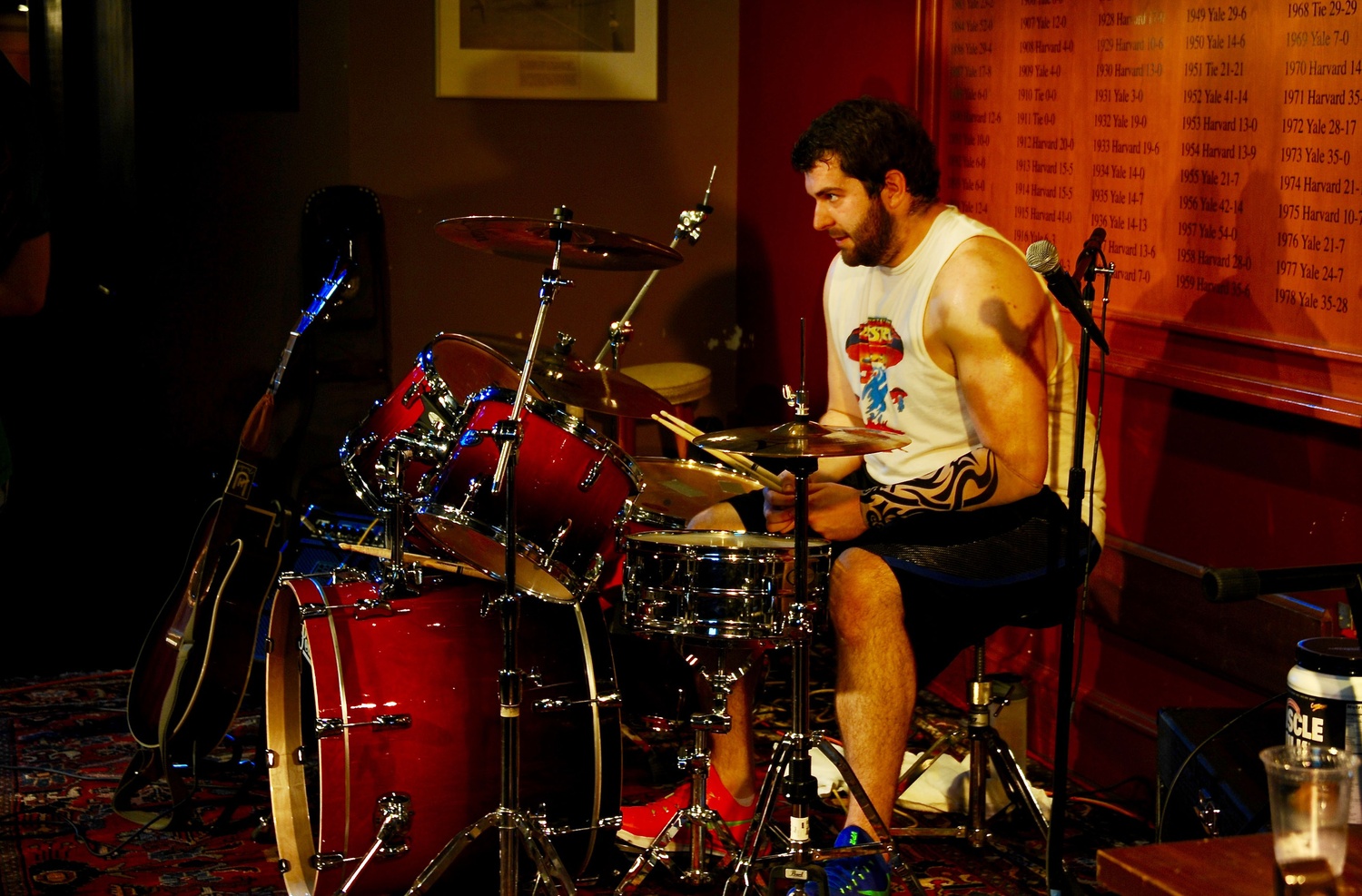 On Friday, six student bands—Protein Shake, Obasi-Shaw, Foxpack, Shitzu-Jujitsu, the Lighthouse Keepers, and Catch of the Day—drummed, strummed, and sang it out in the Queen’s Head Pub for the opportunity to open for Yardfest. After a night of music ranging from sultry jazz to spirited alternative rock, the crowd voted The Lighthouse Keepers and Protein Shake as Yardfest 2016’s student openers. The Roving Reporter caught up with a few of the bands after the show.

Roving Reporter: How do you balance football and music?

Cole Toner: It’s tough. We’ve played with each other since we got to the Quad—there’s a recording studio in the SOCH, so we started jamming there. We loved doing that, and we decided sophomore year, “Hey, we’re going to play Yardfest senior year, we’re going to try it.” We have less of a time commitment for football now, since we’re seniors. Two of us are done, and two of us are just doing the NFL workouts in the morning. It’s a lot of fun.

RR: What kind of music do you like to play most?

CT: We’re mostly just a rock band—a little indie—but we haven’t jammed together for that long. We’ve practiced probably 10 songs and played five here. But we like all types of music; a lot of us are very musically smart guys. I want to say a special shoutout to Scott Peters [’16], our guitarist, who broke a string in the first song and transposed down a key the whole time. Still played every note right. If he wasn’t a genius, we wouldn’t have had a show.

RR: If you could have any professional football player in your band, who would it be?

CT: Andrew Luck. He’s a smart guy [who] appreciates music too. I don’t know if he plays any instruments, but I’m sure he can learn. His personality seems a lot like ours—a little goofy, smart, has a lot of fun.

RR: How did you first meet as a band?
Daniel Winshall: Claire Dickson [’19], the lead singer, brought us all together. I met her at summer camp.

RR: How long have you been playing together?

DW: About a week.

RR: Where do you guys see yourselves going in the future?

DW: Personally, I want to take over the world. First the East Coast, then America. And then maybe Europe.

RR: Any repertoire you really want to explore?

RR: If you had the chance to play one dream gig—you could play anywhere—where would it be?

DW: At the end of his life, Miles Davis had a house in Malibu. If I could play a gig at that house in Malibu, after he got together with Cicely Tyson for the second time, I would.

RR: How would you guys describe yourselves?

Mark Grozen-Smith: I usually describe [our band] as a combination of Red Hot Chili Peppers and Stevie Wonder.

RR: Are you feeling any stage fright?

MGS: Not really. We’ve played on average one show a week this semester, so that’s helped us settle into not just being onstage but also playing together and making music as a band rather than just individually.

Teddy Brokaw: I get the opposite of stage fright now. We’ll go up there, and I’m in an adrenaline haze. The blood starts pumping, and I just go blank with rock-and-roll. We always perform way better than we sound in rehearsal.

Christian Carrick: We put a lot of time into writing and sharpening our songs, so when we get to perform, we’re so into them, all that goes away.

RR: Do you guys have any pre-performance rituals?

MGS: I stare deeply into Christian’s eyes for two hours before every show.

CC: I’ll do mock guitar solos with my mouth, and that gets me in the right frame of mind.

TB: As the bassist, which has long been understood to be the most important, glamorous position in the band, I’m usually off to the side with my harem of groupies.