Flyby’s Countdown to Yardfest: Guide to Having a Swae-nky Time

By Courtesy of GIPHY

Alright folks. We are just days away from the first Yardfest since 2019… Phew. As someone who attended the Yardfests of yore (i.e. exactly one, featuring Kiiara & Bazzi), I am wildly excited for the chance to relive some freshman year nostalgia. Sure, maybe we didn’t get Olivia Rodrigo opening plus the ultimate One Direction reunion as Flyby once manifested, but Swae Lee isn’t a bad deal either! Read on for all you need to know about this Sunday’s festivities.

What Even Is a Yardfest??

For those who have not experienced Harvard’s annual spring darty concert – i.e., literally everyone younger than the Class of 2022 – here’s what you need to know. Sponsored by the College Events Board since 2006, Yardfest is billed as the ultimate chance for the student body to join together in a day of musical festivities – fun fact, it used to be called Springfest and was hosted by the Undergraduate Council (rip).

Expect a day of fun from start to finish, kicking off the post-Spring Break season (aka, the best part of the school year) with a bang. Before the official events begin, be on the lookout for any student groups throwing their own pre-Yardfest festivities.

After the block parties, you’ll want to head on over to Tercentenary Theatre (the spelling is pretentious, we know) at 4 p.m. (especially if you want to secure even more Yardfest swag!). Student openers will start at 4:30 p.m., the “celebrity opener” (ooh mysterious) begins at 6 p.m., and Swae Lee gets going around 7 p.m. – and then time for a good night’s rest before that Monday morning Gen-Ed! 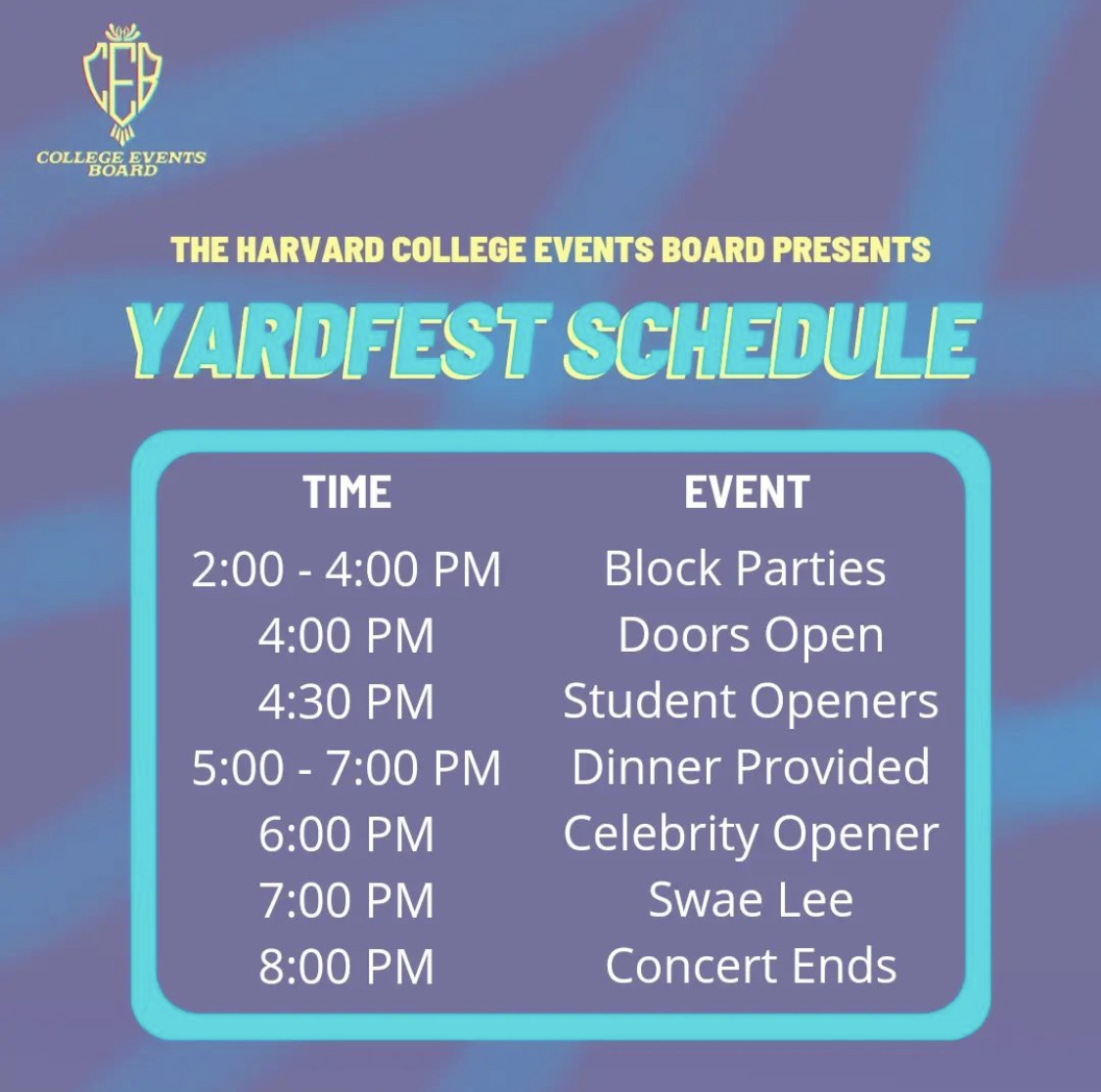 By Courtesy of College Events Board

In my professional opinion, there are a couple of absolute must-haves you’ll need when the day is actually here. First up, break out those fanny packs, folks – you’ll want to bring the essentials, but large bags are not allowed. Make sure to bring your Harvard ID along too, as only Harvard students are allowed inside (and there’s no re-entry allowed either!).

Once the day is finally here, DOWN. THAT. WATER. It’s a Sunday after all – you don’t want those Monday morning classes hitting like a brick. A good brunch is an absolute must too. There will be a barbecue dinner from 5-7:30 p.m. in the Yard, but don’t skip lunch in anticipation — you don’t want to be enjoying the festivities that day on an empty stomach.

When you arrive at the concert, you’ll first be greeted by two student group openers, chosen at last month’s Battle for Yardfest. The Yard Bops feature a “contemporary blend of pop and funk music” and also performed during CEB’s virtual Crimson Jam back in 2020. Along with them will be Charles Revival – a band composed entirely of freshmen, so all you class of 2025s better be excited. ;)

Now for the especially fun part: that ~Celebrity Opener~ I mentioned earlier. Your guess is as good as mine for who this will be, but my bets are currently on Maggie Rogers, Jay Sean (again), or Larry Bacow on a saxophone. Or who knows! Maybe B.o.B. will make his triumphant debut after last semester’s canceled Crimson Jam.

Who Is Swae Lee?

So by now you’ve been through the block parties, the student openers, AND the super special celebrity guest – it’s now FINALLY time for the star of the show himself, Swae Lee. First revealed after he leaked his calendar on Twitter last month, Harvard is just one of the many college concert appearances Swae Lee will be making this semester.

Especially well-known as one half of the duo Rae Sremmurd with his brother Slim Jxmmi, Swae Lee is a rapper, singer, songwriter, and record producer. You may know him from the 2016 hit “Black Beatles” (aka, the Mannequin Challenge trend that took over the Internet), or from any of his many, many features that have netted him a number of Grammy nominations. (Not to mention, he was also raised in Mississippi, which brings this fellow Mississippian a lot of joy <3).

And by the way, if you happen to be reading this @Swae Lee, we would certainly not be upset if you brought some of your many ~friends~ along – I’m sure Post Malone or Jhené Aiko or Nicki Minaj would love Harvard too 😌

So, break out those festival fits, pack your fanny pack, and start downing those water bottles. Most importantly, have fun, stay safe, and enjoy the hopefully nice Cambridge weather!