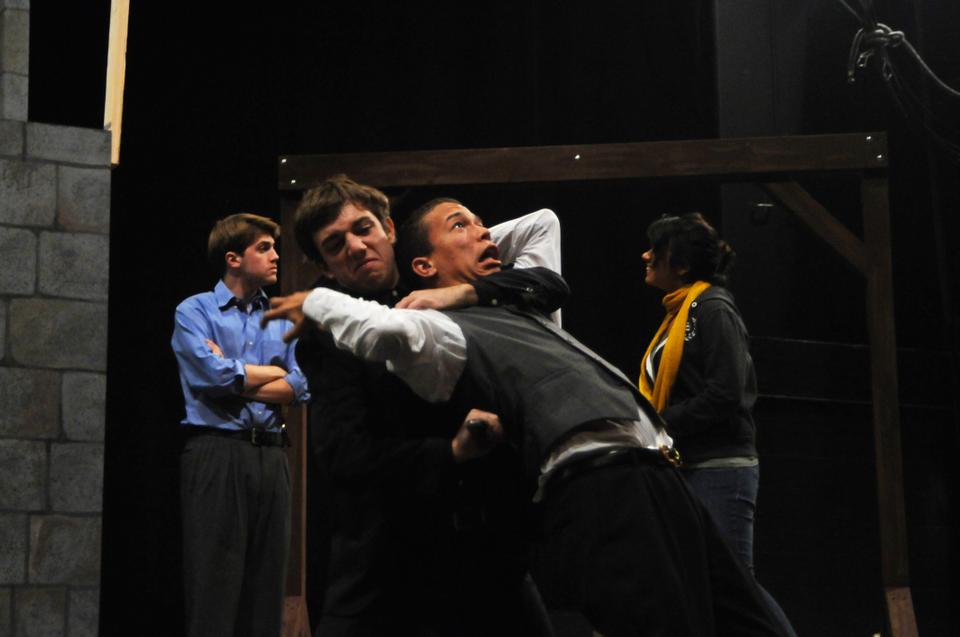 Spencer J. Home ’14 struggles against an attack in the production “The Spanish Tragedy.”
By Sarah S. Zhang, Contributing Writer

Thomas Kyd’s play was exceptionally influential in its time and inspired more than a few elements in his contemporary William Shakespeare’s now more famous tragedy. Like “Hamlet,” it features a play-within-a-play and a vengeful ghost.

Thus it seems appropriate that the HSC has chosen “The Spanish Tragedy” as its first production where the Company’s namesake is nowhere to be found in the credits. “It is really the first modern revenge play,” says Federman, who is also president of the Company.

Set in the Spanish court, the play centers on the knight marshal of Spain, Hieronimo, who struggles with avenging the murder of his son Horatio. Also entangled in this tragic tale are Bel-Imperia, Horatio’s grieving lover, and Lorenzo, Bel-Imperia’s brother and one of Horatio’s murderers. As promised, violence ensues. The Spanish royalty set about stabbing and backstabbing each other as the plot unfolds.

“There’s lots of fake blood, and pretty much any type of physical violence you can think of,” says Harleen K. Gambhir ’14, who plays Bel-Imperia. “We even have a functioning gallows,” adds producer Diana Michta ’11, referring to a key scene where a character is hanged. A professional choreographer has been enlisted to hone the play’s many fight sequences.

After all that fake blood has been spilled, however, “The Spanish Tragedy” aims higher than the primitive impulse. The play is an exploration of how revenge and violence can tear apart a political body.

“The theme of revenge has resonance in a time where politics has become so personal,” Joshua O. Wilson ’13, who plays Hieronimo, notes.

“The Spanish Tragedy” is over 400 years old, but Federman promises that its action-driven plot and straightforward language make the play more accessible than Shakespeare’s.

“It didn’t need much updating,” she says—after all, “Revenge is a theme we find in movies all the time today.”