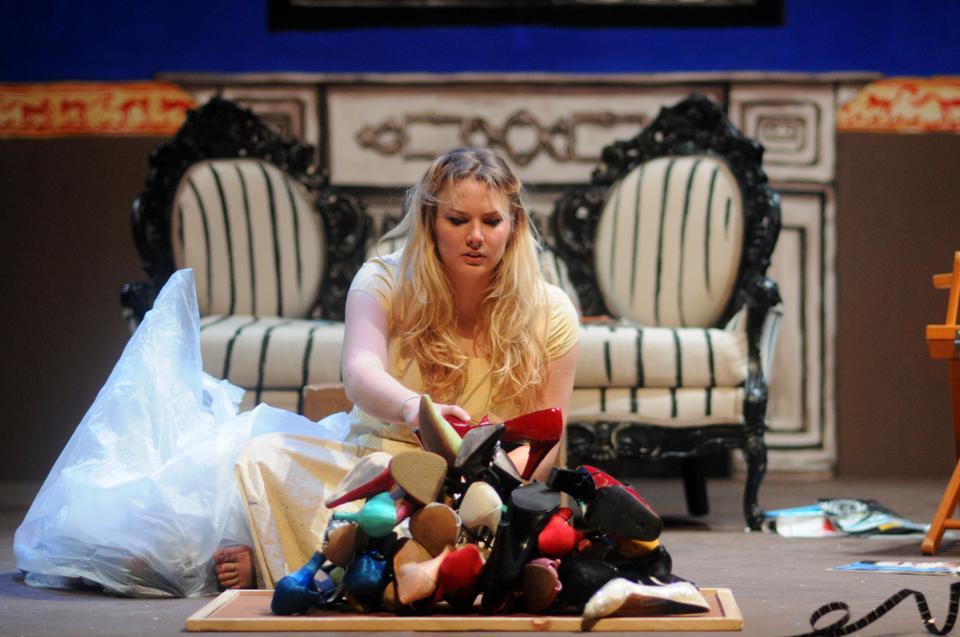 Aneliese K. Palmer ’12 plays the matriarch of the Hogan family in “Fat Men in Skirts!!!?!,” running through May 2 at the NCT.
By Araba A. Appiagyei-Dankah, Contributing Writer

“What if we’re two loons, nutty as fruitcakes, and there’s no one else around as a sanity barometer?” asks matriarch Phyllis Hogan (Aneliese K. Palmer ’12) midway through Nicky Silver’s “Fat Men in Skirts!!!?!,” a play directed by Caroline R. Giuliani ’11 which runs through May 2 at the New College Theatre.

Silver’s script constantly questions the ways in which perspective can challenge and twist views of acceptable behavior. Throughout “Skirts!!!?!,” unsettling and bizarre topics including cannibalism, mother-and-son incest, and serial murder are presented in the same plane of sanity as familial destruction, drug use, and adultery. In this generally well-directed and effective production, viewers are purposefully left to sift through the jumble of disjointed, jarring scenes and decide what is dream, what is reality, and whether there is a true difference between sanity and insanity.

“Fat Men in Skirts!!!?!” chronicles the darkly humorous and tragic disintegration of the Hogan family. The family’s destruction is catalyzed by the play-opening plane crash in which Phyllis Hogan and her 11-year-old son Bishop (Christopher J. Carothers ’11) are stranded on a deserted island. As his family struggles to survive, patriarch Howard Hogan (Noah A. Hoch ’11) becomes more involved with his porn-star mistress Pam (Ella G. Gibson ’13) back at home. Once the family reunites, the four characters clash with disastrous results.

Despite the play’s non-linear plot progression peppered with flashbacks, internal monologues, and scene changes between the island and the outside world, the actors’ superb abilities to transition between scenes keep the show cohesive and imbued with forward-momentum.

Palmer has the most difficult task in this respect, because her character switches quickly between modes. In one moment she is a naïve newlywed; in another, a crazy woman trying to understand that her husband no longer loves her; and in another, a frustrated mother. She injects humor into all of these roles, especially with lines such as her distracted dismissal of her son: “Can’t you go play with the dead bodies or something? You’re eleven; you should like that sort of thing.” Palmer rises to the occasion in every scene, softening her character’s sharp and inaccessible edges and bringing empathy and nuance to a difficult part.

Both Palmer and Hoch shine in one of the most disturbing scenes in the play, when the 16-year-old Bishop rapes his mother on the island. Giuliani’s decision to have the actors perform the scene symbolically, with the stage bathed in sinister red light is a testament to her excellent direction. Hoch angrily stands at Palmer’s feet—yelling “Shut up!” over and over—while Palmer writhes on the ground, screaming and moaning in a scene as visceral and chilling as a literal representation.

While the rape scene continues, Gibson walks onstage and announces, “Ding! There will now be a short intermission.” Her nonchalant delivery of this tension-displacing line exemplifies her disturbingly humorous performance throughout the play. Her eventual transition between a desperate mistress and a paranoid schizophrenic effectively blurs the play’s reality.

The show’s elaborate set-design and lighting also have a hand in confusing viewer perception. In the first half of the play, the stage is divided into two raised platforms: one containing a deserted island scene and the other, a fully furnished living room. When the lighting switches between platforms, it seems that there is a scene or temporal switch.

When, however, characters interact across the platforms or wander between them—as they frequently do—any understanding of the island and the outside world as separate and unconnected realities is shattered. The set’s spatio-temporal malleability works in tandem with other design details: the offstage director’s chair labeled “Hogan” that Bishop frequently occupies, and the disembodied voices that suggest the play might be a product of Bishop’s insane mind.

“Fat Men in Skirts!!!?!” excells at engaging its themes, but it does have some notable flaws. Occasionally, Giuliani’s direction crosses the line between dark humor and graphic tastelessness, as in the scene when Bishop eats a dead baby and continually spits chunks of it across the stage. In moments like these, the play is completely inaccessible and repulsive, rather than thought-provoking or funny.

Additionally, Giuliani’s attempt to break the fourth wall fails. Moments where the actors directly interact with the audience are out of place and serve no practical purpose in a play that is already jarring and difficult to comprehend. The debris strewn across the back rows of the theater feels unnecessary, while the moment when Palmer tosses a beach ball into the crowd is awkward and confusing.

“Fat Men in Skirts!!!?!” is a mind-bending, extremely dark, and very funny play that questions the conventional understanding of sanity. While not perfect, Giuliani’s direction creates a baffling, yet ultimately rewarding theatrical experience.