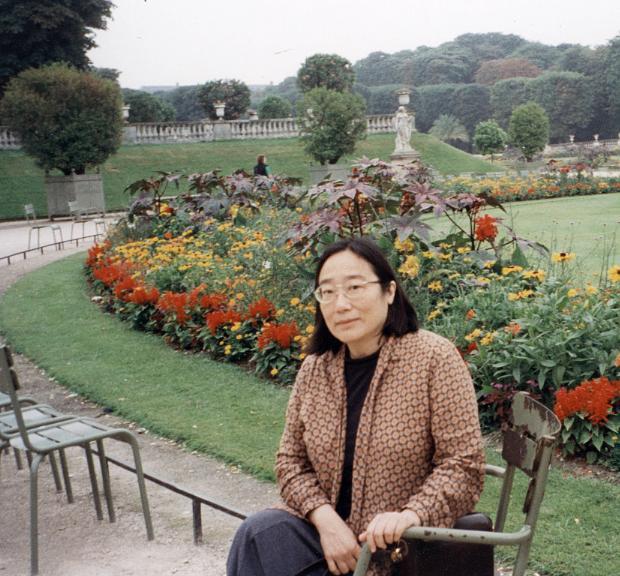 Sitting in her living room, which overlooks the very buildings in which she took her finals at Radcliffe College, playwright Rosanna Y. Alfaro ’60 described a successful career that she had never envisioned during her time as a student.

“No. No, I wasn’t involved in theater at Harvard at all,” Alfaro said. “I was far too shy. I stayed clear of that scene.” Such a statement might seem odd coming from an accomplished playwright—she is author of 40 plays and numerous short stories—but her admitted avoidance of the dramatic arts while at Harvard did little to hinder Alfaro’s current profession.

But her peers said that the “shyness” belied Alfaro’s observant nature.

“She was a lot like she is now except maybe a little bit quieter,” said Carol L. Boulukos (née Snyder) ’60, Alfaro’s classmate who also currently lives in Cambridge. “She can seem shy but she’s not really at all, just quiet, always sizing things up.”

Alfaro, who is Japanese-American, said she could only remember there being three other Asians in her class when she arrived at Harvard in 1956. But it was gender, rather than race, that seemed to distinguish her on campus, Alfaro said. In her time as a Radcliffe College student Alfaro said she recalled that there were professors who would rather cancel class than speak freely on certain subjects—such as the novel “Finnegan’s Wake”—in front of women.

Despite some discouraging cancelled lectures, Alfaro, an English concentrator, began to develop her voice as a writer in her creative writing classes, which she said were her favorite. “They were small next to the large English lecture courses,” Alfaro said. “You suddenly felt like a real person.”

Then, in her senior year, The Harvard Advocate published two of Alfaro’s short stories, which she said pushed her to continue writing.

The women’s movement had only just begun to take form, and while most of her fellow classmates went straight from the dorms of Radcliffe to the role of housewife, Alfaro opted to further her education. Alfaro continued her studies at Berkeley, then began teaching English at Boston State College.

In the 1970s, Alfaro decided to dedicate her time to raising her two children. It wasn’t until Alfaro and her husband moved to Canada that her writing really began to take off; while living there, she published 21 short stories.

“It was much easier to get published there,” Alfaro said. “Here in America there is a writer everywhere you turn.”

Soon after, Alfaro began working on a novel about the Japanese internment camps—or at least attempting to. “In reality, it was really just plain awful but I realized it fit perfectly into three acts, so I thought maybe I should try turning it into a play. After that I never looked back,” she said.

However, Alfaro’s first play was not particularly well received. “It went across the country trailing bad reviews” Alfaro said, but she cited this as a powerful learning experience.  “It was just like a high school textbook—too much information, too expository—but I’ve weaned myself from that sort of thing.”

Alfaro said she thrived on the feedback and flexibility playwriting offered over her previous short stories. Since then, Alfaro has written 30 short plays and 10 longer plays.

“Plays are very different from writing short stories. You begin by yourself but then the actors comes in, and the director,” Alfaro said. “There is something very exciting about your characters turning into flesh and blood. You are amazed when the actor has heard the same voice in your head that you had while writing it.”

David Gidron, who began directing many of Alfaro’s plays 15 years ago, said it was her honesty and variety that drew him to her work.

“She is a terrific and fearless playwright with an individual and astute voice,” Gidron said. “She has a versatility, and there is always something very truthful about it. The characters can be very surprising, but they are truthful and you recognize them.”

Alfaro also wrote and co-produced a short documentary titled “Japanese American Women: A Sense of Place.” The film focuses on Alfaro and 12 other Japanese-American women as they struggle to find a place in a society dominated by stereotypes. Alfaro said she felt race-based hostility while at Berkeley, and that this experience influenced her  focus on  Japanese-American issues. Although much of Alfaro’s work focuses on Japanese-American identity, she has also dealt with subjects ranging dramatically from Greek mythology to biographical pieces based on figures such as Martha Mitchell and Pablo Picasso.

“They’re real and full of her humor and unique commentary,” Boulukos said of Alfaro’s plays. “They are always enjoyable.”

Currently, having just turned 71, Alfaro continues to write every day and is in the midst of her latest play about an Asian-American professor at Harvard on the cusp of old age. “When you write, everything in your life falls through the filter of the play. Sometimes it’s hard [to] extricate yourself,” Alfaro said.

Her latest play, which symbolically brings Alfaro back full circle to her days at Radcliffe, is a testament to that.