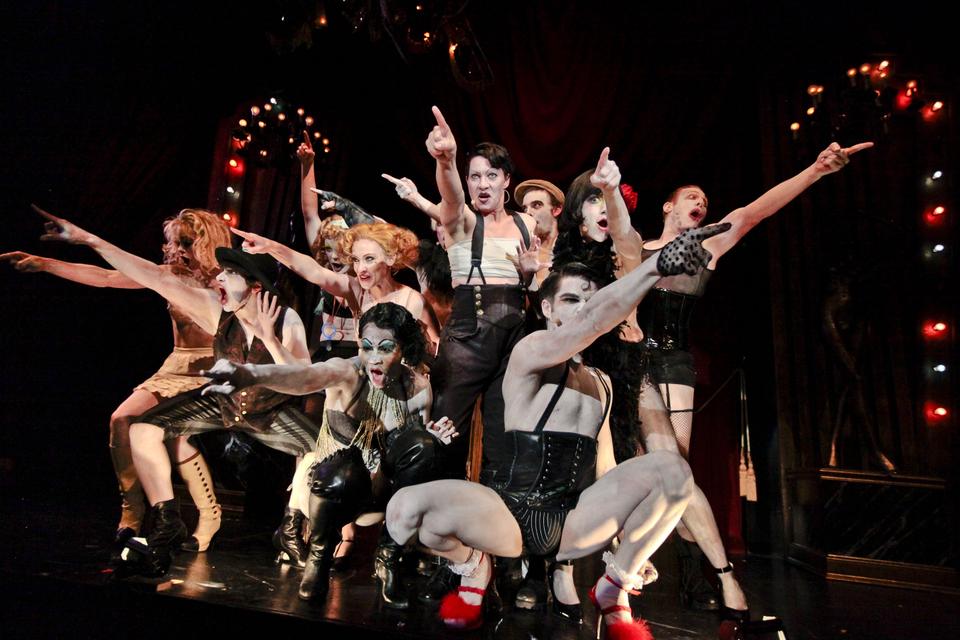 Members of the Kit Kat Klub reach out to audience members in the American Repertory Theater’s production of “Cabaret,” which runs through October 30 at OBERON.
By Erika P. Pierson, Crimson Staff Writer

“Ah, you want some pineapple?” asks the Emcee (Amanda Palmer) of an audience member in the American Repertory Theater’s (A.R.T.) “Cabaret.” Her inquiry turns out to be more of a command than a question, however, as she pushes a piece of pineapple on a fancy toothpick towards her chosen receiver. “It’s vegan,” she exclaims with a giggle. “Yay, interactive theater!”

“Cabaret,” which runs until October 30 at OBERON, forces audience members to enter a world that at first glance might seem like a far cry from the streets outside. It’s self-aware and understands the possibility for theater to become removed from the patrons it entertains, while still feeling emotionally relevant. However, director Steven Bogart and his artistic team avoid simply contemporizing the action and instead take more innovative and less literal risks, incorporating mirrors which reflect the audience, clever staging, blinding spotlights, and a bold but astute Emcee.

The show quite literally invites its audience to enjoy a night at the Kit Kat Klub, complete with table seating that features drink delivery and a rousing game of “Never Have I Ever” led by Kit Kat Klub members before the show even begins.

Set in 1931 Berlin, “Cabaret” centers on the world of the indulgent Kit Kat Klub as it becomes intertwined with the world outside, which hangs in delicate balance on the brink of World War II. Star singer Sally Bowles (Aly Trasher) meets American writer Cliff Bradshaw (Matt Wood) one night, and romance soon follows. As the war draws closer, Sally, Cliff, and the others must decide how or if to acknowledge the unrest building outside the Klub’s walls.

Palmer, a Boston local perhaps best known as half of the Brechtian punk cabaret duo The Dresden Dolls, guides this action forcefully and impeccably with a conversational and personal air. She slides off stage quietly only to appear full force for numbers such as “Money” and the almost cinematically-staged “I Don’t Care Much.” Her character is deliciously androgynous—thanks to the imaginative and tantalizing costuming by David Isarael Reynoso—clad in laced up combat boots and suspenders, her breasts bound down with ivory cloth.

Although her accompanying Kit Kat Klub members easily could have turned into outlandish one dimensional background caricatures, they become intriguing members of the show through their amusingly riotous and debaucherous numbers. Each member commits wholeheartedly to developing his or her own unique character.

Unfortunately, but nevertheless enjoyably, the lavishness of the Klub and Palmer’s dominating, yet welcome presence often force the other plotlines into the background. This one-sided focus brings about less flashy numbers such as “Marriage” and also glosses over the romance between Bowles and Bradshaw.

Yet, owing to the strength of the Kit Kat ensemble as well as mirroring the growing chaos of the impending war, the two stories become increasingly intertwined. This is especially evident as the Emcee and Kit Kat Klub members lounge on chairs and interject one-line quips into scenes between other members of the cast.

While it might be hard to compete with Palmer in a role that seems almost made for her, Trasher makes a magnificent Sally Bowles. She blends a perfect cocktail of innocence, eagerness, and despair, culminating in a moving rendition of the song “Cabaret,” wherein she peels off her eyelashes and knocks the microphone over in a moment that could have easily become melodramatic if done poorly.

Avoiding the trap many popular musicals fall into, Bogart never allows the production to become too predictable or simplified. He has given the show a desirable and unique blend of humor and haunting beauty without touching the realm of overdone.

The show ends with Palmer standing almost nude in a spotlight as members of the nearly-naked ensemble twist grotesquely in doorways on either side of the stage. As the cast takes their bows in simple white robes, they seem little different than they have the whole show: fanciful, but strangely real people. In that culminating moment, it becomes clear that Bogart has succeeded in turning “Cabaret” into an interactive and indulgent, though incredibly sincere, experience.