Lang Lang Features In a Show of Pedagogy 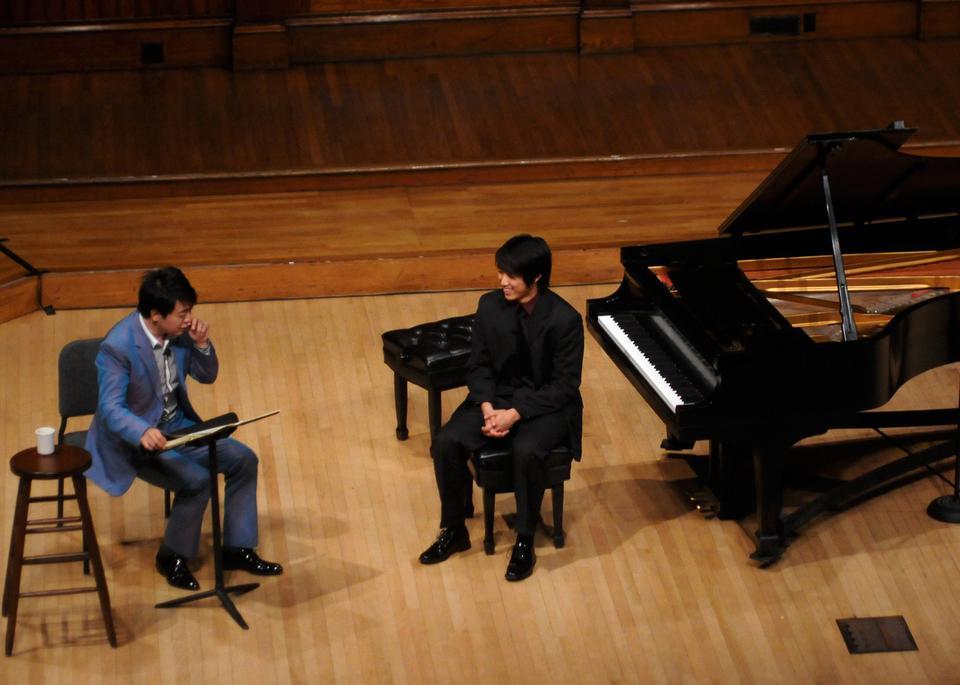 Pianist Lang Lang gives a master class in Sanders Theater Saturday afternoon as part of the Learning from Performers program through the Office for the Arts. George Fu '13 listens to feedback after his performance of Sergei Prokofiev's Sonata No. 7. George is the second of three Harvard students to perform.
By Nicholas T Rinehart, Crimson Staff Writer

“That’s kind of better.” Lang Lang—the 29-year-old pianist phenomenon who has released over a dozen commercial recordings and was listed in TIME Magazine’s 2009 list of the “100 Most Influential People in the World”—is standing over Tania Rivers-Moore ’15 as she repeats a passage from the first movement of Beethoven’s Sonata in E Major, Op. 109. “For Beethoven, we need more intensity, more struggling,” he says, donned in a lustrous slim-fitting suit that is somehow both blue and purple under the Sanders Theatre lights.

Rivers-Moore was one of three undergraduate students who played for Lang Lang in a master class in Sanders Theatre last Saturday. For these student pianists, the master class was a unique opportunity to play for one of the classical music industry’s preeminent artists.

The class was co-sponsored by the Office for the Arts at Harvard’s (OFA) Learning from Performers program and the Celebrity Series of Boston. The OFA and Celebrity Series have collaborated on programming for several years and have brought a diverse array of artists—from choreographer Mark Morris to actress Audra McDonald—to the Harvard campus. “Through Learning from Performers, we enable artists to be able to talk about the creative process and reflect on their values,” says Amy W. Lam, Artistic Programmer at Celebrity Series.

Lang Lang was a valuable artist to bring to Harvard due to his tremendous commitment to youth musical education through the Lang Lang International Music Foundation. “Lang Lang focuses a lot of time in nurturing talent and has a passion for education,” says Lam. “The Lang Lang foundation is completely devoted to nurturing young talent.”

The pianists chosen to perform for Lang Lang, after being contacted by Music Department faculty to audition for the class, were excited to hear the virtuoso’s thoughts on their own interpretations of selected pieces. Allen Yueh ’13, who performed Franz Liszt’s Sonata in B minor, S. 178, said, “I just want to hear his ideas. I have my own interpretation of it, my own storyline, and I really want to see if he has a different storyline, or something that I could incorporate into my own storyline.” Lang Lang responded positively to Yueh’s playing. “You have very good ideas,” he remarked, as he helped Yueh to produce a more haunting sound. “This is music for scary movies,” he said.

George X. Fu ’13, who performed Sergei Prokofiev’s Sonata No. 7 in B flat, Op. 83, was eager to see how Lang Lang would help him better express his personal interpretation. “Whatever he does, it is very convincing. So while I may not agree with what he does, he manages to sell it so well,” Fu says. “In the end, when you play music, you are just looking for the best way to sell your music, the best way to convey your message. And I think he would help me do that with my piece.”

Rivers-Moore also noted how Lang Lang, known for his larger-than-life stage persona, helped her achieve a more effective performance. “I thought that the master class was particularly valuable because each pianist had such a different stage presence, and such different visions to bring to the table,” she wrote in an email. “This master class permitted me to leave with a less inhibited and more balanced approach to performing.” Fu is the Co-President of the once defunct but now revamped Harvard Piano Society, an organization dedicated to providing new performance and master class opportunities for pianists at the college. The group also serves as an important social venue for players of a “solitary” instrument like the piano, says Fu.

Lang Lang’s master class was a particularly exciting event for participants and spectators alike not only due to the virtuoso’s elite status in the classical music world, but also because it was a unique performance opportunity for undergraduates not affiliated with any student or departmental ensembles. “I think master classes would be a really good way to open the door for individual performances,” says Yueh. “[Lang Lang’s master class is] more a show of sharing, and I think that is what Harvard needs more of.”

Fu, echoing this sentiment, said, “The fact that he is even considering doing a master class here is really just a blessing.”

—Staff writer Nicholas T. Rinehart can be reached at nrinehart@college.harvard.edu.