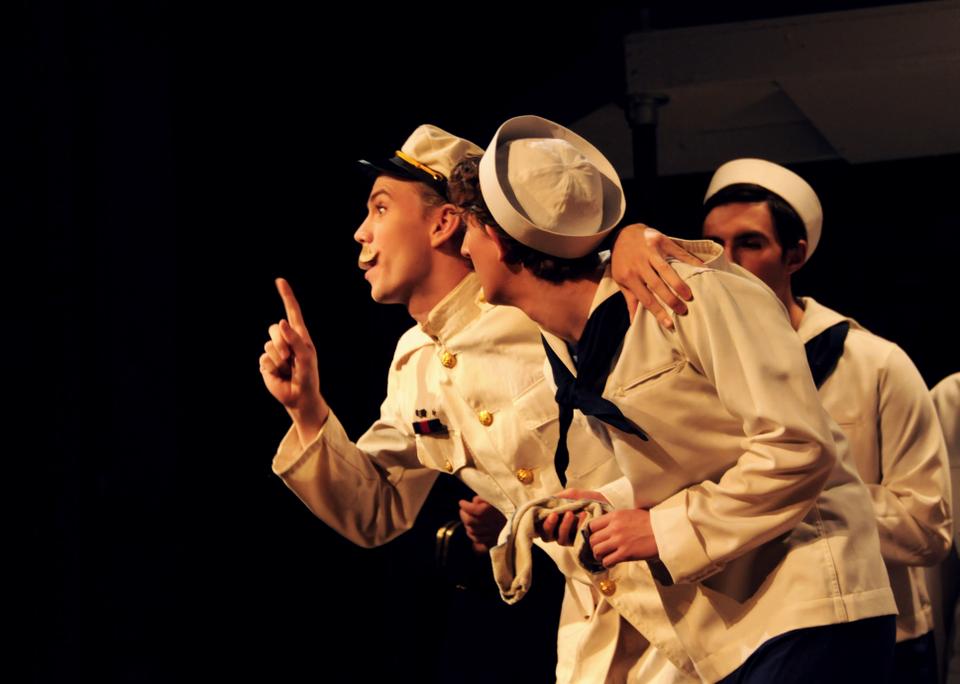 Christian N. Føhrby ‘14, playing Sir Joseph, lectures the audience and the cast about about his ascent to “Monarch of the Seas” in Gilbert and Sullivan’s HMS Pinafore.
By Christine A. Hurd, Crimson Staff Writer

“Stick close to your desks and never go to sea, / And you all may be rulers of the Queen’s Navee!” sings silver-mustachioed Sir Joseph Porter (Christian N. Føhrby ’14) with flailing hands. The Harvard-Radcliffe Gilbert & Sullivan Players’ (HRG&SP) rendition of the nautical operetta “H.M.S. Pinafore; or, The Lass that Loved a Sailor”—which runs until November 13 at the Agassiz Theatre—let the libretto sparkle with winking revelry. Gilbert and Sullivan operettas give actors license to be exuberant, and the cast’s earnest verve coupled with a fresh set interpretation and skillful accompaniment creates an irresistible pick-me-up of a production.

While the operetta is traditionally set on a 19th-century Royal Navy vessel, HRG&SP’s “Pinafore” takes place on a 1930s cruise liner complete with shuffleboard and bright-colored, wide-shouldered dresses. The change lends an infectious silliness to the production. In a show that is lyrically canonical, the bright whitewashed ship walls and costumes make every chorus number seem even more vibrant.

Standing out amongst the joyful multitudes is Padilla’s bright-eyed Captain, showcasing an excellent stage presence and comedic timing in tandem with Ross’ Jack Sparrow-esque Buttercup. During the number “Things are seldom what they seem,” Ross’ liquid movements and low timbre are chilling while Padilla’s puzzled asides to the audience keep the mood light. Dick Deadeye (Thomas C. Wilhoit ’13), the cantankerous crippled seaman, also provides a humorous dose of schadenfreude. He manages to steal some attention amid the commotion with his slow, Herman Cain-like smile during Ralph’s suicide attempt.

As the main pairing of “Pinafore,” Goodknight and Ray play the Sailor and the Lass admirably. Ray’s pure soprano is the vocal highlight of the production, and she hits every potentially ear-splitting note with grace. Ray’s singing superiority could make the couple seem mismatched in more than just economic stature. Fortunately, Goodknight’s golden-boy aura makes him the perfect subject of “For he is an Englishman,” the show’s focal number, and more than compensates for his comparable lack of range.

Music director Lucien D. Werner ’13 does a flawless job of leading the 26-piece orchestra. Music and stage blend so seamlessly that the score feels more like an extension of the actors’ emotions than routine instrumental backing—a rare feat. The best numbers are ballads such as “Fair moon, to thee I sing” and “Sorry her lot who loves too well,” quiet numbers where the orchestra might otherwise overpower the vocals but manages to enhance them instead.

The show runs into a few staging difficulties, mostly confined to a male chorus that struggled with synchronization. There are several occasions, especially in the first act, when members of the cast look impatient because the sailors of the male chorus aren’t moving up and down the two-level stage fast enough. However, such slip-ups are the exception rather than the rule, and the female chorus’s cartoon villain approach to “Carefully on tiptoe stealing” more than makes up for the small glitches in choreography.

“Pinafore” is not a production for those looking for Kafkaesque struggles or renditions of actors exploring their emotional range, and the cast thankfully does not have any such pretensions. Instead, it is a well-executed comedy that avoids turning saccharine with an injection of dramatic relief. Sewed together by talented actors, musicians, and artists, “Pinafore” will delight those looking for cleanly performed cleverness from a group that obviously loves what they do.

—Staff writer Christine A. Hurd can be reached at churd@college.harvard.edu.