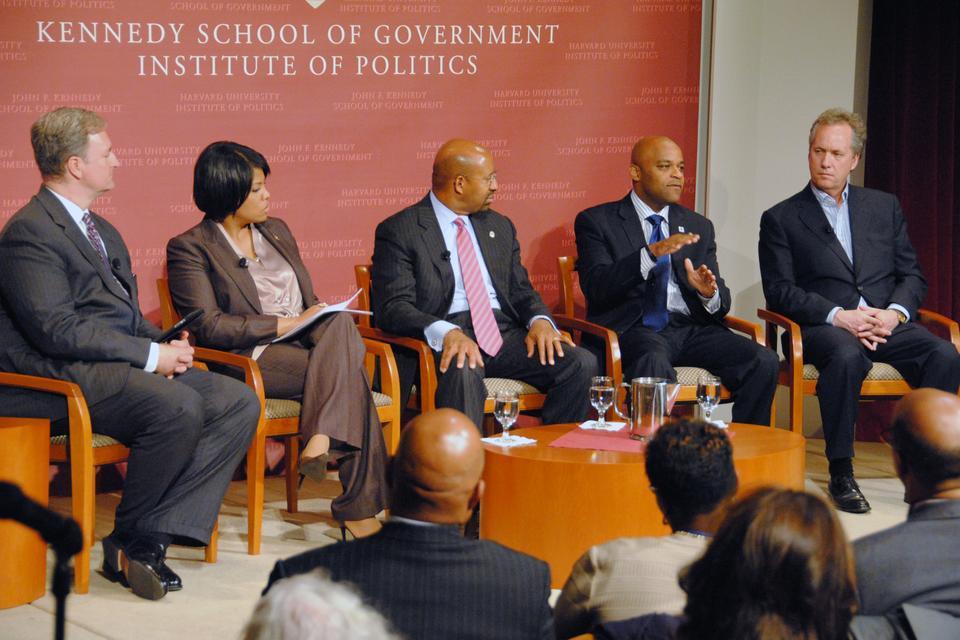 IOP Director Charles M. Grayson '94, left, moderates a panel discussion with some of the United State's most prominent mayors. The group discussed issues that are currently affecting the cities which they lead.
By Fatima Mirza and Dillon van Auken, Contributing Writers

Occupy Harvard protesters interrupted a mayoral panel at the Institute of Politics on Wednesday evening, protesting perceived injustices at the Occupy Philadelphia camp.

“You can’t evict an idea,” hecklers yelled at Philadelphia Mayor Michael A. Nutter. After a call-and-response shout in the “mic check” style characteristic of the nationwide Occupy movement, the protesters were led out by security.

The protesters said they were upset at distortions in how Nutter presented the relocation of Occupy Philadelphia.

“Mayor Michael Nutter made it clear by eviction action and his statements at the Forum that free speech in American cities has a curfew,” Maryam M. Gharavi, a supporter of Occupy Harvard and a Harvard doctoral student, wrote in an email.

“Even after ordering a midnight police raid, one that used police on horses trampling people, he claimed that his forces acted with no violence and caused no injuries,” she wrote, referring to the only hospitalized protester, who sustained foot injuries.

“At the beginning of the event and in the Forum pamphlet, people were told that disruptions would be met with possible arrest and legal proceedings,” she added. “It appears Mayor Nutter gets to determine the boundaries of free speech in public space.”

The interruption fit the topic of the panel discussion, which addressed the participating mayors’ policies on the Occupy movements in their cities. Nutter was joined by the mayors of Baltimore, Md.

Each mayor recognized the importance of free speech and the right to protest but expressed concern about the potential repercussions of the Occupy movements.

“You have to get to a point where you turn this movement to action,” Nutter said.

He expressed concern about the ability of city governments to address Occupiers’ demands.

“I can’t do anything about bank policy. That has to be done in D.C. They are not within our realm,” Nutter said.

The mayors also faced critical questions from audience members about their policies on issues ranging from pension cuts to cooperation with public officials.

In their responses, they said that they must make difficult decisions on a daily basis to balance the concerns of various parties.

“If you have a deep-seated need to be loved and admired, then you should not be in this job,” Nutter said. “You should work in a pet shop.”