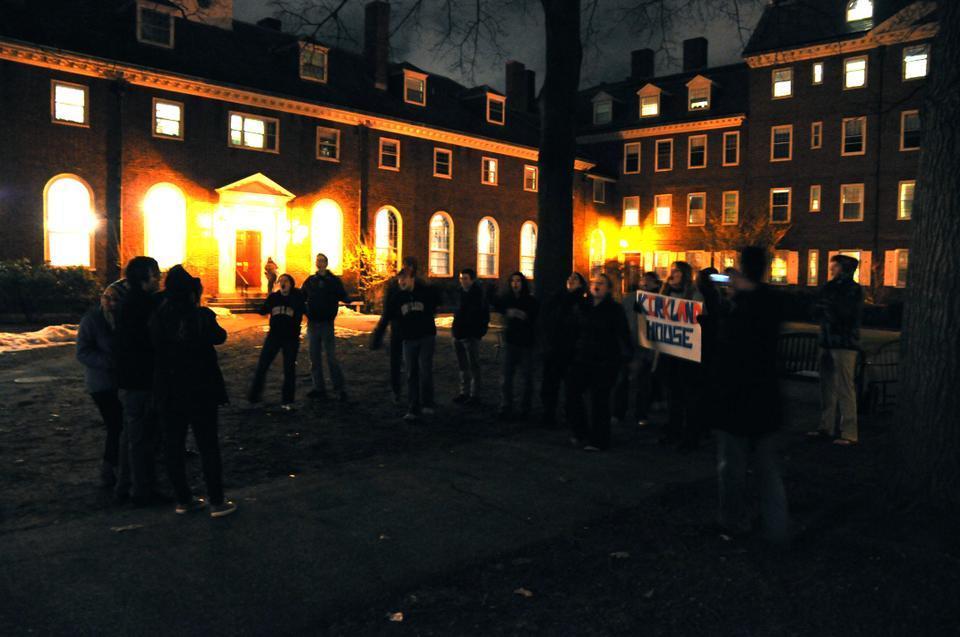 A freshmen blocking group huddles together in the Kirkland courtyard as current residents of the House cheer them on. Freshmen braved the cold to carry on the Housing-Day Eve tradition of River Run.
By Kelly K. W. Lam, Crimson Staff Writer

When Geoffrey W. Challen ’02-’03, a resident tutor at Eliot House, put forth his views on underage drinking at Harvard in a recent Crimson column, he wrote that “[s]tudents hide their parties because inevitably some of the attendees are underage.”

During last night’s “River Run”—a recent pre-Housing Day tradition in which students take shots of alcohol with their blocking groups in each of their preferred Houses—freshmen seemed to witness such a hide-and-seek game.

One male freshman who said he planned to visit several Houses with his blocking group noted that “[t]o say that there won’t be drinking and partying is a blatant lie”, adding that he gleaned those two activities to be “crucial, according to tradition.”

Around 11:30 p.m., streams of freshmen were seen walking towards Mather and music could be heard from Leverett.

“Everything’s awesome,” someone shouted excitedly outside of the Leverett Towers.

But drinking and setting burning boats labeled with the names of wanted or unwanted Houses afloat on the Charles—festivities now seen as River Run traditions—have in fact only been adopted since 2008 by the Class of 2011, according to Associate Dean of Student Life Joshua G. McIntosh. Other Housing Day eve rituals have long existed before these, including bonding rituals within blocking groups, according to Crimson archives.

Last week, Dean of Freshmen Thomas A. Dingman ’67 sent an e-mail to freshmen, reiterating the College’s opposition to boat-burning and underage drinking.

“While we certainly want you to have fun and celebrate together, we cannot condone and must prohibit the continuation of some of these practices,” he wrote. “Should you choose to participate in the River Run, be prepared to accept consequences related to your actions, including possible arrest and charges before the Administrative Board.”

Many current freshmen and even upperclassmen said they perceive the College’s restrictions on River Run as suppressive of school spirit.

Some upperclassmen sent out invitations to freshmen to join them in private parties, offering them a space “to do whatever housing traditions you choose.”

One upperclassman included a serious word of caution in his invitation, saying, “Don’t get arrested or Ad-Boarded.”

Some freshmen, though, found alternative ways to celebrate and bond. Stephanie L. Grayson ’14 said she and her friends decided to make ice cream sundaes together.

Others headed to “Fresh Fest” in Annenberg, an alternative event to River Run organized by the First-Year Social Committee, where freshmen were encouraged to bond over free massages, balloon animals, free snacks, puzzles and board games.

While some freshmen said they were only attending the “official” programming, others said they planned to go to the River after Fresh Fest.

A number of freshmen did not participate in River Run or any of the night’s festivities due to midterms on Housing Day. Annie X. Yang ’14 said she has a proposal due on Housing Day, and Samantha S. Wesner ’14 noted that her entire blocking group has midterms.

“Unfortunately, River Run is in the middle of midterm season,” said Grayson, noting that she herself had to finish a response paper prior to going out.

“It seems like it’s mostly about the drinking, and no one in my blocking group is really into that,” Wesner said.

Around midnight, the scene began to resemble that on a normal Saturday night, with students gathered outside Quincy, Leverett and DeWolfe—with one notable exception: mascots.

A penguin and a polar bear donning an “I heart PF” logo were seen skipping, hand-in-hand, on DeWolfe Street and into the Quincy House courtyard.

HUPD vehicles were seen around the River until well past midnight, and although students climbed the bridge in groups, the scene was quiet.