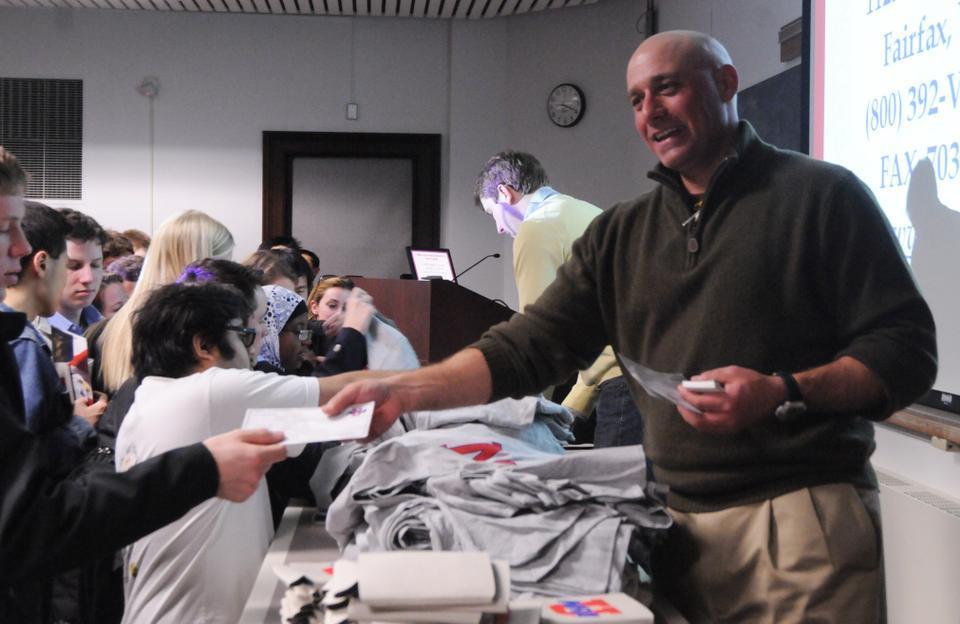 Glen A. Caroline hands out National Rifle Association membership certificates and free t-shirts to students yesterday after his talk on the Second Amendment and gun control.
By Joseph E. Glynias and Candance B Samuel, Contributing Writers

Representatives of the National Rifle Association argued that an increase in the purchase of registered guns leads to decreased crime rates at an event last night sponsored by the Harvard Republican Club and the Harvard Shooting Club.

The talk, which attracted about 100 people, was part of the NRA University program that tours college campuses to educate students about the second amendment.

Director of the NRA’s Grassroots Division Glen A. Caroline said that the second amendment is vitally important to citizens’ safety, freedom, and, if necessary, protection against their own government.

“I kind of look at the 2nd Amendment as an insurance policy,” Caroline said.

Caroline said that Americans, who are law-abiding and mentally stable, should be able to buy guns free of government restrictions.

He condemned a current law in Va., Calif., and Md. that prohibits citizens from buying more than one handgun a month.

“It’s like saying you can go to church, but only on one Sunday a month,” he said of the law.

The group considers itself non-partisan, though it generally supports Republican candidates in its opposition to most gun control. Seth M. Waugh, the NRA’s grassroots coordinator, spoke about different campaigns he has staffed, and expressed his joy that George W. Bush defeated Al Gore ’69 in the close 2000 presidential election.

“I shudder to think what would have happened in our country and to my job had he been elected,” he said.

Students at the event, most of whom supported the NRA, said they were pleased to see the program come to campus.

“I was a glad a conservative group was coming to a more liberal university,” said Aditi Ghai ’14.

“I thought it was really interesting—it cleared up a lot of misconceptions about gun-control laws,” said Salvatore R. Rinchiera ’14. Rinchiera added that he plans to participate in pro-gun activism in the future as a result of the event and the free NRA membership offered to all attendees.

The NRA representatives at the event also encouraged everyone to vote, a point that was highlighted in videos they screened featuring Chuck Norris, who is a spokesman for the NRA’s Trigger the Vote campaign.

“If you won’t register to vote, you’ve already surrendered,” said Norris in a video the representatives showed at the event. “I will never surrender.”