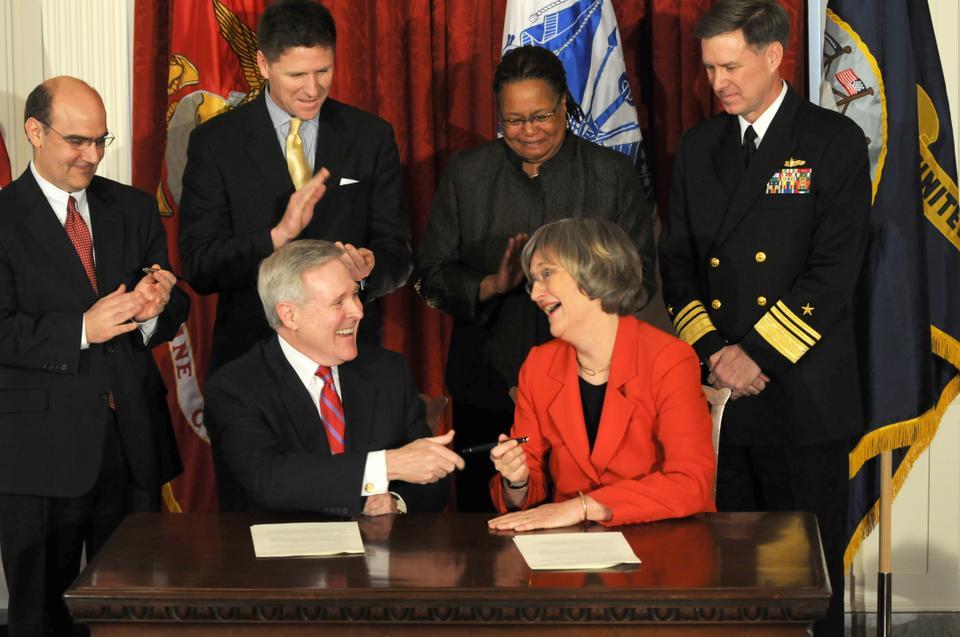 “Our renewed relationship affirms the vital role that the members of the armed forces play in serving the nation and securing our freedoms,” Faust said at the signing ceremony Friday.

The agreement to recognize NROTC—which comes on the heels of Congress’ December repeal of “Don’t Ask, Don’t Tell,” the military policy which banned gays and lesbians from openly serving the military—will go into effect when the policy’s repeal is implemented later this year. The University previously did not recognize ROTC because it said that “Don’t Ask, Don’t Tell” violated its non-discrimination policy.

Speaking before a bank of television cameras and around two dozen Navy sailors and Marines in dress uniform, Faust said that she had “looked forward to this day with anticipation and pride.”

Since the repeal of “Don’t Ask, Don’t Tell”, Faust and other University officials have been in discussions with the Pentagon about bringing the program back to campus.

“It underscores the importance that all of us place on opportunity and inclusion—on opening pathways for students to pursue their ambitions, to cultivate their capacity for leadership, to lead lives of value to others,” Faust said.

The University is currently in discussions with the other services about resuming official relations, Faust added.

While Friday’s agreement only grants formal recognition to NROTC, the decision is of significant symbolic importance and represents a drastic departure from the often antagonistic relationship that has existed in the past between elite U.S. universities and the American military.

But tensions remain as some consider Friday’s agreement to be discriminatory.

Outside the signing ceremony in Loeb House, protesters picketed the event in support of gender equality. Some opponents of ROTC’s return to Harvard contend that the move is in violation of the University’s non-discrimination policy given that trans-identified and intersex individuals are not allowed to serve in the military.

With Friday’s agreement, a director of NROTC will be appointed at Harvard, and the University will provide funding for the full cost of students’ participation in the program.

“It is wonderful news. It’s a huge step forward, not just for the military and for Harvard, but for the country,” said Seth W. Moulton ’01, a retired Marine captain. “We shouldn’t have elite institutions removed from those who serve our country.”

The recognition will also allow midshipmen to use Harvard facilities for physical training and to take Harvard transportation to MIT.

Although ROTC will be officially recognized, a unit will not necessarily be established on campus, and Harvard cadets will continue to train at the Massachusetts Institute of Technology. The University is unlikely to establish a unit at Harvard until there is a sufficient amount of interest among students.

Currently, only 20 students are enrolled in ROTC.

Military budget constraints may prevent the return of other services in the near future, according to Kevin “Kit” Parker, chair of the newly created ROTC implementation committee. Parker is an associate professor at the School of Engineering and Applied Sciences.

The return of ROTC to Harvard is also likely to have spill-over effects to universities who currently do not recognize the program.

Moulton said that he believes that Harvard’s recognition will put pressure on other universities to follow suit. Columbia and Yale have had a similar non-recognition policies toward ROTC, though both universities are said to be in talks with the military.

Kennedy School Professor David R. Gergen said he believes that Harvard’s recognition is “likely to have a ripple effect across the nation.”

But as Faust signed the agreement in the grandeur of historic Loeb House, approximately 25 students, faculty, and queer rights activists protested outside, chanting “Put down your pen!”

“Harvard has a commitment to take its non-discrimination policy seriously,” said Sam J. Bakkila ’11-’12, a Harvard College Queer Students and Allies board member. “One group can’t be ignored. Every member of LGBTQ, including the T, must be considered.”

Currently, the military does not allow trans and intersex individuals to enlist as it considers gender identity disorder—the psychological classification that describes transgenderism—and intersexism to be medical disqualifications. Some opponents of recognizing ROTC contend that this policy is discriminatory.

Though openly gay and lesbian individuals will be able to serve after top government officials certify the repeal of “Don’t Ask, Don’t Tell,” the new policy will not apply to trans and intersex individuals.

“I feel really sad, more than anything else,” said Cameron E. Partridge, a trans-identified lecturer on Studies of Women, Gender, and Sexuality and at the Divinity School. “I don’t think this is an uncaring decision. This just raises questions about how Harvard intends to uphold its non-discrimination policy.”

In 1969, Harvard expelled ROTC amidst a wave of student and faculty anger over the Vietnam War. Later, the University based its continued split with the military on the basis of “Don’t Ask, Don’t Tell,” which Harvard considered in violation of its non-discrimination policy.

In recent years, relations with the military have warmed significantly. Since 2008, Faust has attended the spring ROTC commissioning ceremony, continuing a precedent set by her predecessor, Lawrence H. Summers. During a campus event with Joint Chiefs of Staff Chairman Michael G. Mullen in November, Faust made clear that ROTC would be welcomed back when the military changed its policy on gays and lesbians.

Several faculty members at the ceremony acknowledged the protesters’ concerns, noting that they intend to work toward reconciling this issue.

“This day is a very important and significant moment in the history of the College and the University,” said Dean of the College Evelynn M. Hammonds. “But there are still a lot of things we have to do to resolve these concerns.”

Faust said that administrators will continue to “dialogue” with these students.

“I view [the protesters] sympathetically. This is a work in progress, but recognizing ROTC is a very important step nonetheless,” said Harvard Divinity School Professor Diana L. Eck, a Lowell House Master who has served on the BLGTQ Task Force.