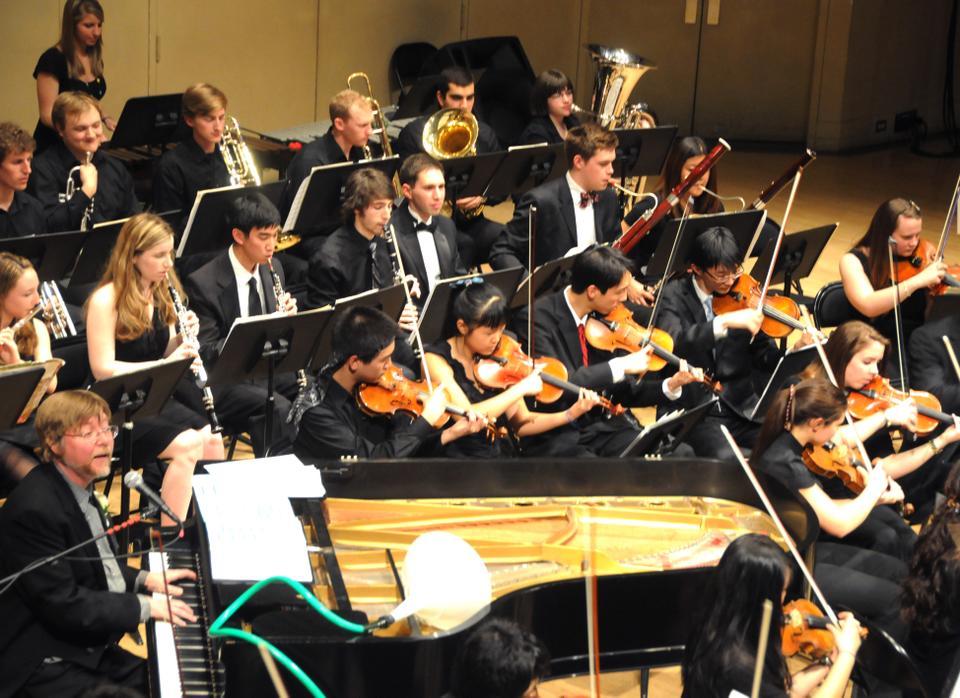 After thirteen years of combining orchestral music with rich theatricality, it was fitting that the Harvard Pops Orchestra reflected on their growth in their latest spring concert, “Pops Comes of Age,” last Saturday in Lowell Lecture Hall. Presented first as an Alumni Reunion Concert for former Pops musicians, the concert featured acclaimed composer and music director Brad Ellis, best known for his role as the pianist on Glee.

“I’m struck at the artfulness [Brad] brings to music making, his craft, his versatility, and the positivity he brings,” Harvard Pops Musical Director Allen G. Feinstein ’86 said of Ellis.

Ellis participated in a Learning From Performers seminar last Wednesday in Adams House LCR, where close friend Feinstein acted as moderator. In a stark contrast to his quiet and reserved character on Glee, Ellis was talkative and engaging; he inserted impromptu piano playing to accent humorous accounts of working with celebrities like Jane Lynch, Billy Joel, and Kristin Chenoweth. Noting Ellis’s surprisingly gregarious character, Harvard Pops Co-President Ivan D. Bochkov ’12 said, “He talks in real life!  We are going to make fun of this a little bit on Saturday.”

Bochkov, Co-President Kenneth C. Hammond ’12, and Pops musicians certainly poked fun at this misconception of Ellis when developing the concept for the concert. They set their performance at the fictional “Harvard Middle School,” where student Leah, played by Natalie S. Feldman ’12, brought new neighbor Gabe, played by Ryan P. Halprin ’12. to join her middle school Pops orchestra.  When evil band concert director Mr. Ratigan, played by Brandon J. Ortiz ’12, attempts to take over the orchestra, Leah and Gabe ask the Vice-Principal (Ellis) for help. Ellis responded first in a meek voice, but then cleared his throat and proceeded to sing Irving Berlin’s ragtime “I Love a Piano.”

Noting this creative narrative approach, Hammond said, “we bring in actors and scripts as a way of connecting the songs to the audience and providing more entertainment.”

Intertwined in the plot was a diverse array of songs—highlights from “Wicked,” the theme from “Mission Impossible,” excerpts from “Fiddler on the Roof,” and more. The Pops' rendition of "Fiddler on the Roof" featured a beautiful and intricate solo by Nora K. Ali '11. Ali's performance reminded the audience that despite the evening's playful plot and musical selections, the Pops musicians are not lacking in technical skill. Her rendition received a standing ovation.

As the night’s dramatic journey unfolded, the Harvard Middle School Pops enlisted the help of alumni to trump the wicked Mr. Ratigan. The performance concluded with a flourish as Harvard  College’s real Pops alumni joined the student musicians for the traditional rendition of “Throne Room and End Title” from “Star Wars,” in which they played elementary percussion instruments. However, in full appropriateness, they surprised the audience with an encore—a medley of popular songs from the TV show “Glee” sung by Ortiz and Feldman.

Though the Pops’ dramatic narrative and complementing musical selection did not necessarily align in the most sensible way, it was clear that the goal was light-hearted entertainment. With one silly instrument made of garden tools, a section of the orchestra acting as Asian pirates, and several Harvard-appropriate jokes about Adam Wheeler and Mark Zuckerberg, the show was all in good fun. “I enjoy the vibe of the Harvard Pops and their rife sense of humor,” Ellis said.

One word to sum up this year’s Pops concert? Gleeful.

The April 11 article "Light-hearted Pops Tell Story of Growing Up" misstated the name of the piece featuring Nora K. 'Ali 11. The piece was "Fiddler on the Roof," not "Hoseanna."