Transformation from Paper to Play

The playwriting process only begins at the writer's desk 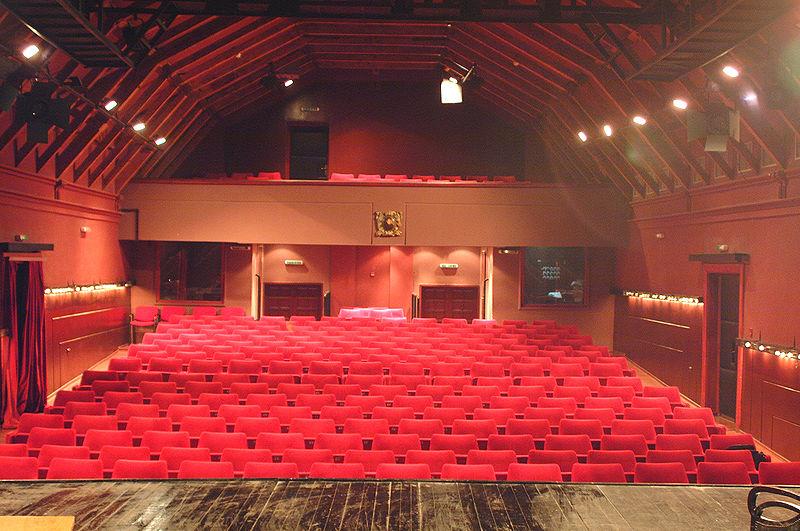 Michael A. Yashinsky ’11 is listening to actors read his one-act play “If Plums Grew on a Thistle” for the first time. It is several hours before the same actors will read Yashinsky’s play before an audience at the Arts First-sponsored Harvard Playwrights’ Festival, the four-day culminating event of English Lecturer Christine M. Evan’s class English Cakr: “Advanced Playwriting.”

The actor playing protagonist Simon is deftly narrating Simon’s bizarre tale of his upbringing, during which he swallowed a peach pit and developed a deep and mostly platonic love for fruit. Yashinsky watches keenly. He puts his pen to his own copy of the script and begins to make notes on a page already covered in green ink.

“Hearing it, it made me think that those lines were far too long and being far too explicit,” Yashinsky, also an inactive Crimson arts editor, said after the reading. “I plan to go back and just … trim. Cut back on a lot of these long lines that I think would be more effective briefer.” Yashinsky has been working on this play for the duration of the semester, but he sees now that his writing process is far from over.

The performances that come from student playwriting, then, tend to receive creative influence from the other artists who help to realize a play.  The playwright often continuously revises the work as it moves closer to production on stage, to ensure that the story translates well to a theatrical production and to incorporate ideas from others who are working on a play. The key to expanding a play’s interpretive possibilities and refining its central elements can come from these revisions and collaborations.

A play bound for production often undergoes constant revision up until or even past the show’s opening as the playwright attempts to navigate the artistic maze of translating his or her story on paper into a performance onstage. “That’s one of the primary characteristics of a play—it’s a recipe for a performance that exists outside of the play,” says English Lecturer and playwright Ken Urban. “Ultimately, even if you’ve got the best-written play and it doesn’t work on stage, it’s not really a good play, because plays have to work in three-dimensional space, in real time, on a stage.” For the playwright, this imperative involves exploring the opportunities performance offers.

Table readings like those at the festival prompt revisions primarily by revealing how dialogue will sound coming from an actor. In the writing process, playwrights must ensure that every important aspect of each character be communicated through speech. “The playwright understands the character so intimately that they think certain important details about the character are in the play when, in fact, they’re not,” Urban says. Actors’ and directors’ interpretations isolate the aspects of every character, a process that helps playwrights identify what was not successfully communicated in their work. “That’s why most writers do revisions after they hear a play out loud,” Urban says.

Staging often spurs further revisions by helping playwrights visualize the opportunities that theater presents as a medium, such as space, motion, and scenery. Exposure to these non-verbal elements can make playwrights reconsider the centrality of dialogue and use more of these subtler methods. Urban affirms that a grasp of the visual can stand in for dialogue heavily burdened with characterization. “I’ve noticed directors say, ‘I don’t think I understand this character,’ but that’s because they’ve only heard that character speaking,” he says. “They haven’t seen the motions and the actions associated with that character in three-dimensional space.” Playwrights are then forced to acknowledge playwriting’s limitations while learning to take advantage of the possibilities presented by performance.

But a play’s journey to the stage is more than a matter of fitting the story to the theater medium. It comes largely in readings or staging, when actors and directors sometimes interpret characters in intriguing ways the playwright hadn’t originally intended. At Yashinsky’s reading, professional director Adam Greenfield and actors at the festival found sympathy in a character Yashinsky had considered a one-sided antagonist. “I’m thinking of going back to that character and making him even richer—fleshing out the character,” Yashinsky says. “They actually found [that sympathy] in the text as it is now, but I’d like to bring it out even

richer—fleshing out the character,” Yashinsky says. “They actually found [that sympathy] in the text as it is now, but I’d like to bring it out even more.” Yashinsky’s reaction to actors’ interpretations exemplifies an open-minded principle held by playwrights: that no one—not even the writer—has exclusive right to the interpretation of his or her own piece.

Actors can even have valuable insights about a play’s characters that a student playwright may never have realized. Andy J. Boyd ’14, whose original play “Zirn Sees the Specks of Light” ran recently at the Adams Pool Theatre, attributes the playwright’s distance from some characters to numbers: “I definitely try to get in that mindset for each character as much as possible, but that’s hard to do when you, as the writer, have to write a scene with multiple characters,” he says. The actor may inflect the character with a different energy or shift the role between drama and comedy.

At other times, however, revision is spurred when actors forget their lines and instinctive knowledge of character kicks in. Boyd recalls a scene in “Zirn” in which one panicked character shoots another in the head and then stands, flustered, gripping his beefy shotgun, over his accidental victim. “…Darn!” he says at last—not the line Boyd originally wrote, but the line Terrence B. McKenna III ’14 said in performance. “It was just such a wonderful understatement that I decided to keep it,” Boyd says. “That’s one of the really amazing things about theater—there’s a wonderful give-and-take between the writer and the actor.” Like the spatial opportunities of the stage, these fortuitous slips in memory—unique to stage acting, when an actor has no script to read from—indicate that some elements of a play may be best understood outside of the solitary moment of writing. “I don’t know how I could not change a play during the rehearsal progress,” Boyd adds.

Many playwrights cross over to writing after or alongside work in other aspects of theater, like acting or directing. Though these playwrights come to the medium with intimate knowledge of another theatrical form, they still rely on others to perfect their plays.

Playwrights from other disciplines have a greater intuitive grasp on the formal requirements and possibilities of theater as a medium, and thus the translation of their stories into dialogue and movement can be much smoother. “I’ve never come to playwriting as an actor, but I’ve always been jealous of those who have,” Urban says. In his experience, actors’ familiarity with scene pacing and the structure of character interactions helps them to write scenes that flow in real time and maintain dramatic tension. “And if you’re a director, you imagine plays existing in three-dimensional space, so you can imagine one of your own,” Urban says.

This prior knowledge has limited use, however: much of what a playwright gains from collaboration comes simply from the basics of collaboration. Experience in another discipline will not help a playwright detect any gaps between what is on paper and what is in their head. “When you have that dialogue internally, it doesn’t work,” Urban says. Other people can bring out unexplored elements, alternate interpretations, and  new ideas entirely.

While a play benefits massively from the revision process it undergoes from each reading or staging, Urban emphasizes that the process never really ends. He tells the story of Tony Kushner, who won the Pulitzer Prize in 1993 for his play “Angels in America”—but then revised the play’s second half for a revival in 2010. “And you know what?” Urban says. “It was better. If Kushner can win every single major award and still revise his play for a revival, then I would say there’s no reason any playwright should stop revising.”

New logistical setups—new stages, new budgets, new actors with different tones of voice—inevitably alter a play every time it is staged. Looking to the reevaluations Urban has in mind, the deeply collaborative nature of theater—and particularly some playwrights’ sense that no one, themselves included, possesses a uniquely “right” interpretation of characters or events—is likely a part of what propels this drive to revise continually.

—Staff writer Austin Siegemund-Broka can be reached at asiegemund-broka@college.harvard.edu.