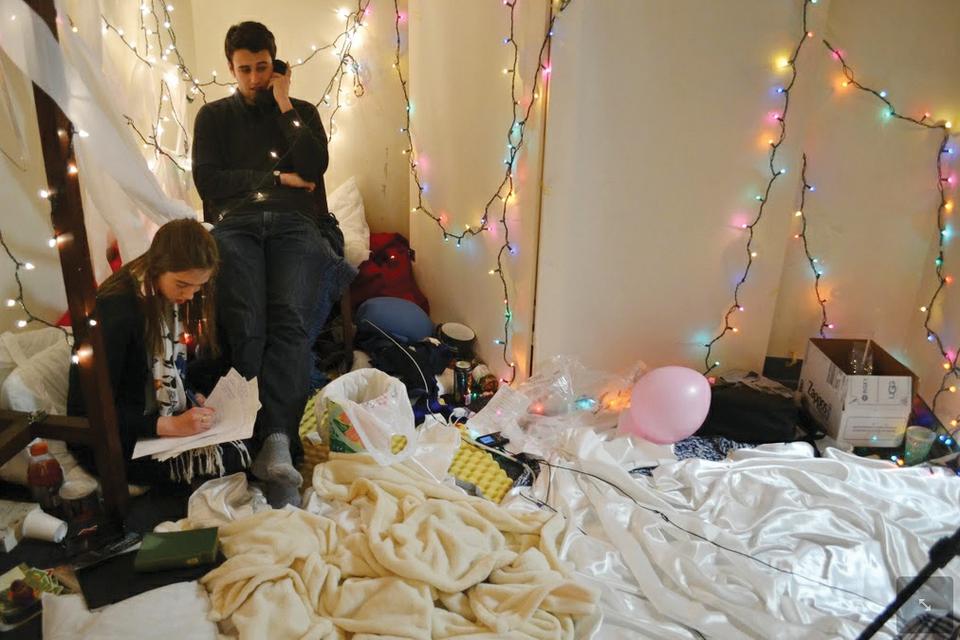 Eric R. Brewster ’14 and Avery A. Leonard ’14 fought off drooping eyelids and the urge to sleep last week as they held a phone conversation that lasted for 46 hours, 12 minutes, 52 seconds, and 228 milliseconds—potentially setting a new world record.

The performance art installation was the premiere creation of the Harvard Generalist, a new student arts cooperative.

Stage Manager Ginny C. Fahs ’14 said that the performance was much like an athletic competition because it required extreme endurance from Leonard and Brewster.

“This explored deterioration—physical, mental, and emotional,” Fahs said. “Because of that deterioration, the balance between art and sport was explored.”

Brewster and Leonard had to follow a strict set of rules outlined by the Guinness Book of World Records. Brewster and Leonard were allowed five minutes of break for every hour spent on the phone. In addition, Speakers could not use prompts or lists of talking points in an effort to keep conversation “natural,” and were not allowed to remain silent for more than ten seconds.

The conversation has yet to be officially declared a new world record, however. In the coming weeks Guinness will review the two-day conversation, which was filmed in its entirety, to verify that the performers abided by Guinness’s regulations.

At least two “stewards”—other members of the Generalist—kept watch over the performers at all times, ensuring that they stayed awake and were coherent. Two official timekeepers were also present to monitor the call’s length.

“For the first eight hours I was here, they were very excited and had original topics,” timekeeper Christian M. Trippe said. “Now you can see their fatigue, and they’re ready to sleep. You could see them rambling as time progressed.”

The room was inspired by “the theme of threats and the question of what would be a threat,” Fahs said.

Generalist members said the temptation to sleep and to read aloud in lieu of genuine conversation posed the biggest threats to the performers. Therefore, the room was filled with pillows, books, and blankets.

The Generalist encouraged spectator participation. Audience members engaged in activities such as decorating the space, braiding Leonard’s hair, massaging Brewster’s feet, and playing Bananagrams and poker with Brewster and Leonard.

“What we wanted was to focus on was having the audience interact with them to hopefully, verbally and physically, inspire new topics,” said Mariel N. Pettee ’14, the director and set designer. “These two people weren’t allowed to read words so the audience was the liaison to the body of knowledge they didn’t have access to.”