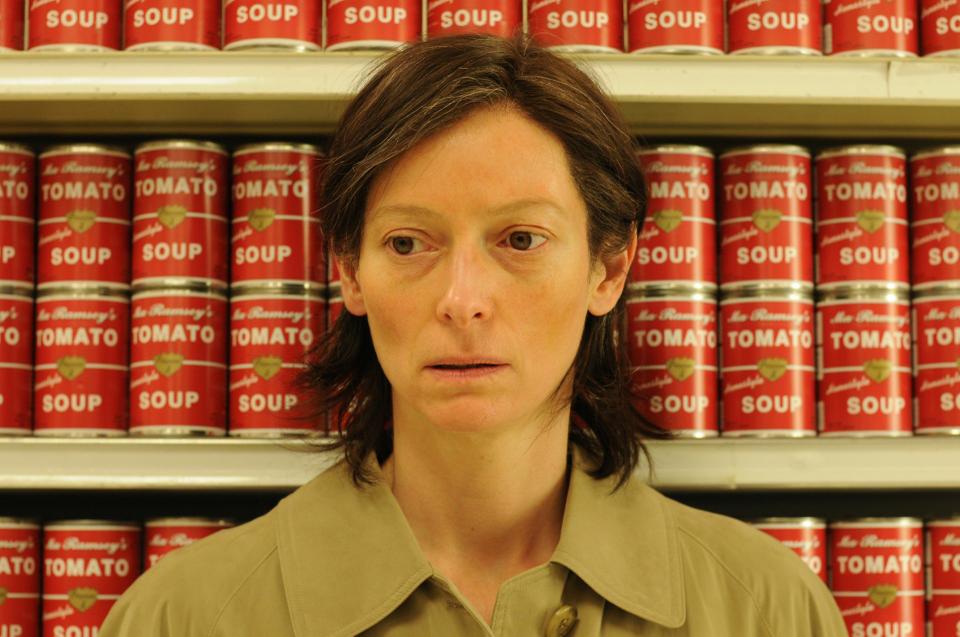 Raising a sociopathic child who relishes violence is a respectable parent’s worst fear. Lynne Ramsay’s film adaptation of Lionel Shriver’s dark novel “We Need to Talk About Kevin” proves an eerily devastating portrayal of this nightmarish scenario. However, an unconvincing plot and two-dimensional set of characters severely limit the film’s potential. Though creepily entertaining and well-acted, “We Need to Talk About Kevin” lacks the realism and substantiated character motivations that would have transformed it from an artful horror movie into a masterpiece.

The story is told through a series of flashbacks from the protagonist Eva’s (Tilda Swinton) perspective. It is immediately apparent that her once-liberated spirit is now tied down by tragedy. She lives alone, and her son Kevin (Ezra Miller) has committed an as-yet-unrevealed heinous crime. The film continues to portray Eva’s life in the present interspersed with flashbacks that eventually depict her entire relationship with Kevin, from the time she was pregnant until a few days before his 16th birthday, when he locks the doors to his school gymnasium and systematically shoots and kills a number of his fellow students.

Eva and Kevin had a tumultuous relationship, beginning with severe kicking during the gestation period. It only worsens as Kevin grows up and finds new ways to inflict mental torture, all while playing the role of the perfect son around his father (John C. Reilly). It’s as though the only purpose of his existence is to make his mother as miserable as possible, whether by painting on her beloved maps as a toddler or leaving her a CD titled “I Love You” that actually contains a computer virus. Kevin’s horrific crime is hardly his last act, because Eva is forever labeled in their town as the “school-shooter’s mother” from then on. Having red paint splashed all over her house and getting slapped while on the street by mothers of victims, she endures this fate out of some need to take responsibility and accept guilt for her son’s actions.

The performances were commendable in spite of the limited potential for character development. Swinton perfectly exemplifies the silently suffering soldier, and Miller’s demonic teenager is subtle yet spine-chilling. However, Eva and Kevin are truly the only characters of substance; Reilly is believable as the trusting father, but anyone with an air of obliviousness could have played his role.

The film’s aesthetics add to its appeal. The use of unadorned cinematography contributes to the seemingly mundane setting of the story, which perfectly complements the plot about an outwardly normal family. This facade was also reflected by the background music of the film, exclusively composed of upbeat folk songs and uncomfortably loud everyday noises.

Unfortunately, the realism of the cinematography in “We Need to Talk About Kevin” outpaces that of its senseless actual plot. Eva’s actions are completely unrealistic throughout the movie. One must wonder why a woman who was portrayed as intelligent and independent—Eva was a world traveler who wrote a successful book about her adventures earlier in life—would have let a small child control and eventually ruin her life. The film is trying to make a statement about unthinking maternal love, but Eva’s masochistic actions seem inappropriate for her age and station in life.

There is similarly never any reason for Kevin’s behavior, and there is never a time when he is not acting with evil intention, not even as a baby. Thus, we are forced to believe that he was simply born bad. This unnatural, demonic element puts a cap on the potential of the film as a whole, as it turns into mere horror instead of an emotional drama. The only time in the entire film when we see Kevin looking unsure and vulnerable is in the final scene. He is about to be moved to a maximum-security prison upon turning 18 and Eva asks him why he committed his crime. The entire film is riding on this question, and his answer falls short. Because the poignancy has already been lost, this flop doesn’t ruin the climactic moment but rather reinforces the theme of nonsensical violence.

When Eva asks Kevin what is the point of collecting harmful computer viruses on CDs, he responds “There is no point. That’s the point.” This sense of destruction for destruction’s sake is the most prominent theme, and the film itself has little meaning other than the exploration of terror. With such attention devoted to talking about Kevin, it seems cheap that the film clamps shut on his psyche. With exemplary actors and a heavy plot, it is undoubtedly compelling—but more so as a well-shot thriller than as a thorough study of these characters with so much potential to psychoanalyze.