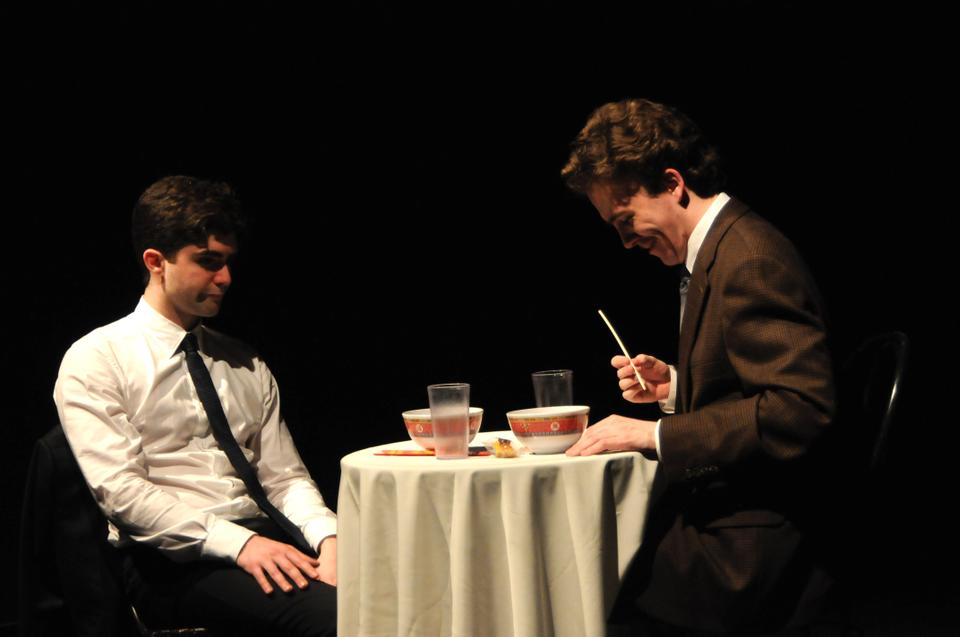 Trickery, profanity, and hard drinking are par for the course when it comes to the cutthroat world of Chicago real estate—at least according to David Mamet’s Pulitzer Prize-winning play “Glengarry Glen Ross.” All these shady dealings come together for a night of felonious entertainment in the Harvard-Radcliffe Dramatic Club’s production, which runs in the Loeb Ex through March 31. Directed by Benjamin A. Silva ’14, the show illustrates the interactions among a group of untrustworthy real estate agents. While abrupt actions and abundant profanity­—combined with solid acting performances—keep the story moving quickly, the lack of nuanced direction makes it difficult to understand the subtleties of the script.

“Glengarry Glen Ross” begins by showcasing a hectic work day for several Chicago real estate agents. With the exception of a waitress who makes a brief appearance toward the beginning of the show, the cast is entirely male. The play is built around a series of vignettes, and each one highlights certain characters and reveals their underlying motives. It is split into two acts: The first shows three one-on-one conversations between swindling real estate agents and their associates; the second depicts the chaos that ensues when their wheeling and dealing blows up in smoke.

The show feels intimate because of the actors’ proximity to the audience, which is mostly due to the small size of the Loeb Ex. Quirky musical transitions are the only pauses in dialogue. This minimalist approach could intensify the unassisted dialogue, but unfortunately, the lack of emphasis on the plot of the show makes conversation between characters drag.

The characters in “Glengarry Glen Ross” are highly emotional, but the script does not offer the actors much in the way of history to give meaning to this emotion. Though their objectives are clearly outlined in their conversations throughout the first half of the show, the reasons behind them are never explored in the script, and this limits the potential growth of the characters over the course of the story.

Though this drawback is built into the original script of the show, as opposed to Silva’s take on it, certain changes in direction could have made the changes more accessible. They deliver their lines rapidly, and while this speaks to the skills of the actors in being able to relay the script so assuredly, it does not leave much room for audience reflection. Better emphasized nonverbal cues and intonations from the actors would have improved the overall understanding of the characters’ intentions and actions. The script is undeniably a challenging one to work with, and Silva should be applauded for his effort. However, by not exploring ways of making the characters real people that the audience can relate to, what could have been a very compelling character study became a blandly comic show.

While their characters may not be developed enough to evoke significant emotional reactions, the seven actors in “Glengarry Glen Ross” do give a compelling performance. Their lines consist of loud, emotional outbursts and dramatic monologues, all of which are powerfully delivered, though a few in particular stand out. Daniel W. Erickson ’14 plays older businessman Shelly Levene, and his animated energy never fades, contributing to a captivating performance. Teis D. Jorgensen ’14, who portrays crooked seller and thief Dave Moss, also gives an exceptionally lively performance. The most poignant lines of the show come from Ricky Roma, played by Adam J. Conner ’14, a Crimson advertising manager. Conner excellently delivers a provocative monologue in the first act, capturing the air of someone who is a very effective salesman while asking the audience such questions as “What is our life?” and “What are we afraid of?” Its sense of ease and professionalism makes his character by far the most dynamic one.

Effective deliveries are worth little without solid direction, and this is the problem faced by the HRDC’s rendition of “Glengarry Glen Ross.” Though parts of the production work, the show as a whole is lackluster. Due to directorial choices, the story’s events are not explained in an easily understandable manner. The actors’ performances keep this play from flopping entirely, but at the same time the script’s undeveloped characters and puzzling events left unclarified by the direction keep it from leaving a lasting impression.

­—Staff writer Jenna R. Overton can be reached at jennaoverton@college.harvard.edu.