But Can We Play Beer Pong? 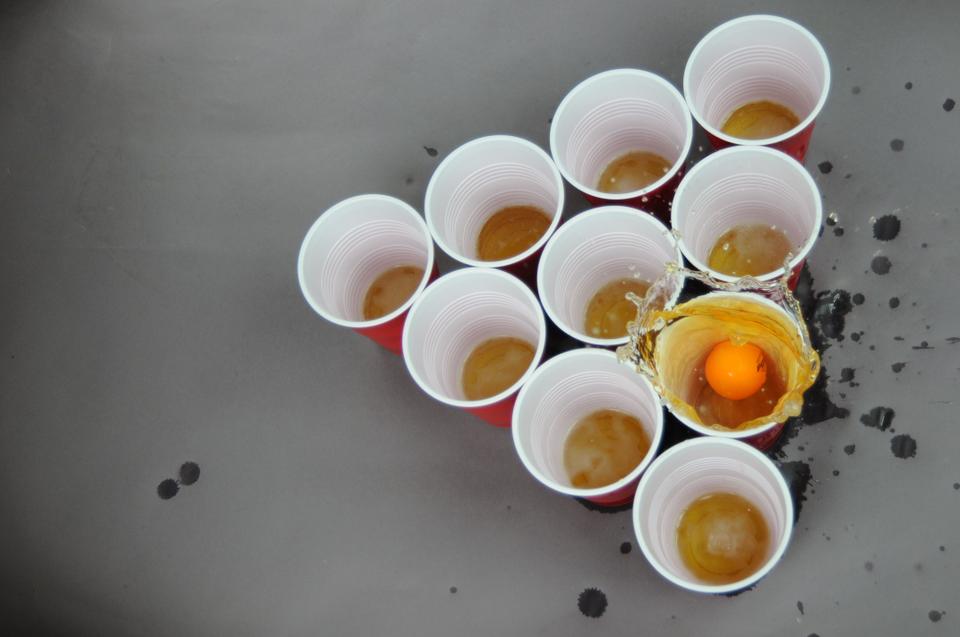 The College's first standardized alcohol policy leaves some questions-- including the status of a beloved drinking game-- up for debate.
By Nathalie R. Miraval, Crimson Staff Writer

The game’s set-up is simple. One table, a few red cups aligned to form a triangle, and two ping-pong balls are the basics required for college students to play beer pong.

While the rules may not be complicated—players throwing a ping-pong ball into a cup at the other end of the table with the intent of making members of the other team drink—its competitive edge raises questions regarding its place within Harvard’s new alcohol policy.

For the first time in Harvard’s history, the College introduced an extensive alcohol policy in March that prompts stricter regulations on excessive and underage drinking and standardizes the alcohol policy between Harvard’s 12 Houses. The policy is the result of a long tug-of-war between students and administrators over alcohol’s place in the Harvard undergraduate community.

The new policy does not appear to resemble anything that has come before it. Almost mimicking the game of pong, the policy’s language goes back and forth between specificity and vagueness, teetering on a thin line between providing a unified set of rules and leaving room for interpretation.

Administrators have said in the past that concerns about students’ health alone prompted their formation of a new policy. Since 2008, admittances to University Health Services due to alcohol-related sicknesses have been on the rise. In the 2010-11 fall semester, admittances had almost reached the total of the entire 2009-10 academic year.

Dean of the College Evelynn M. Hammonds emphasizes that the policy’s main goal is to teach responsible drinking.

In March 2011, Hammonds began her crackdown on underage and excessive alcohol drinking by publishing an op-ed in The Crimson the day before river run—a tradition in which students take shots of hard liquor in front of the House they hope to live in the following academic year. Hammonds then sent a memo to House Masters in March of last year, asking for more consistency in their enforcement of alcohol policy.

A few weeks later the Pforzheimer House Committee canceled its biannual Pfoho Golf event—a drinking game in which students travel to designated rooms called “holes” and drink either alcoholic or non-alcoholic refreshments at each stop. At the time, the House Masters said the organization of the activity did not follow the College’s ID-checking policy for House-sponsored events and promoted drinking as sport.

But one of the biggest shocks to students came at the end of the month when the College announced that hard liquor was no longer allowed at off-campus House formals. Previously, the administration had drawn the line at on-campus House formals only. A year earlier, in April 2010, Dean of Student Life Suzy M. Nelson announced the College’s ban on hard liquor from on-campus formals after the Cambridge License Commission stopped issuing all-liquor licenses to students.

The policy change disgruntled some students, including those who found formals to be a safer space for drinking activities than off-campus options. These students argue that ever-more stringent alcohol regulation at college-sponsored events increases the relative attractiveness of final clubs, where alcohol flows more freely.

But because final clubs are outside the scope of Harvard’s jurisdiction, administrators find themselves in a difficult position in trying to fulfill students’ social demands while ensuring that they follow Massachusetts law.

Hammonds commissioned an alcohol committee headed by Cabot Co-House Master Rakesh Khurana and Nelson. The committee began formulating ideas in November 2011 of what the alcohol policy might look like by hosting seven open meetings for students to share their opinions. Very few students showed up to the gatherings, leading the committee to distribute an online survey for students instead.

Despite the low turnout, Hammonds said that most of the new policy was shaped by student input. House Committee co-chairs and administrators pointed to the reintroduction of mixed drinks at House Formals next academic year as evidence of collaboration and compromise. The inclusion of mixed drinks is considered a pilot program, intended to provide students with a chance to demonstrate responsible drinking. The policy states that the alcoholic beverages must contain mixers and no more than one standard measure of alcohol and must be served by a licensed bartender.

While the new policy creates opportunities for controlled drinking at on-campus events, administrators have taken steps to tighten their grip on alcohol in private settings. Currently, students can find information on the College’s stance on alcohol in the Harvard Student Handbook. The handbook states that underage drinking is prohibited, as determined by the Commonwealth of Massachusetts, and roughly outlines the steps that administrators may take if a student is caught repeatedly drinking excessively. The amnesty policy, which promises that there will be no disciplinary action against intoxicated students who seek medical attention and those who help them, is also outlined in the handbook.

The new policy specifies the kind of drinking habits that are prohibited on campus stating, “Activities that promote high-risk drinking, such as excessive and/or rapid consumption of alcohol, particularly of a competitive nature, are not permitted.” Hammonds says that the rule is meant to provide a universal guideline to House Masters and tutors for determining what behaviors should be considered infractions. The statement’s broadness, she says, gives House Masters the freedom to maintain the character of their community.

“While administrators across the residential system are working to promote the core principles of student health and safety, I think people are also trying to be very creative and attentive in the ways they incorporate those principles to their own local culture.” Hammonds says.

But as the policy has yet to be implemented, tutors grapple with how they will enforce the policy once it takes effect. The policy requires students to meet with tutors before they host their first private party of an academic year. A private party is defined as an event in a student’s room or suite where guests are allowed in by personal invitation only. What is entailed in these conversations may vary from House to House, suggesting that the policy may not be able to achieve the standardization it strives for.

“If the College should decide to leave the specific response to a drinking game to the tutor checking in on the party, I imagine the intent would be to enable that tutor to evaluate the situation’s safety in totality, and to keep tutors out of the business of looking for specific infractions,” says Benjamin Rahn, a tutor in Pforzheimer House. Many other tutors declined to comment or did not respond to requests for interviews for this article.

“That doesn’t mean that we’ll be coming down like a ton of bricks on people. Our responses will be temperate and proportional. That’s what the language says,” Howell says.

In the first week of April, a total of five students attended three focus groups hosted by the alcohol committee directed to gain feedback on the College’s newly released alcohol policy. As a result, the policy will be presented in its current form to faculty next year. Pending faculty approval, the policy will be added to the student handbook.

In the next academic year, students, tutors, House Masters, and administrators may have to work to find a balance between standardizing the policy while also allowing authority figures to evaluate infractions on a case-by-case basis. As the policy takes effect in the next academic year, administrators and students will be forced to navigate the new rules in an effort to have fun, safely.

—Rebecca D. Robbins contributed to the reporting of this story.