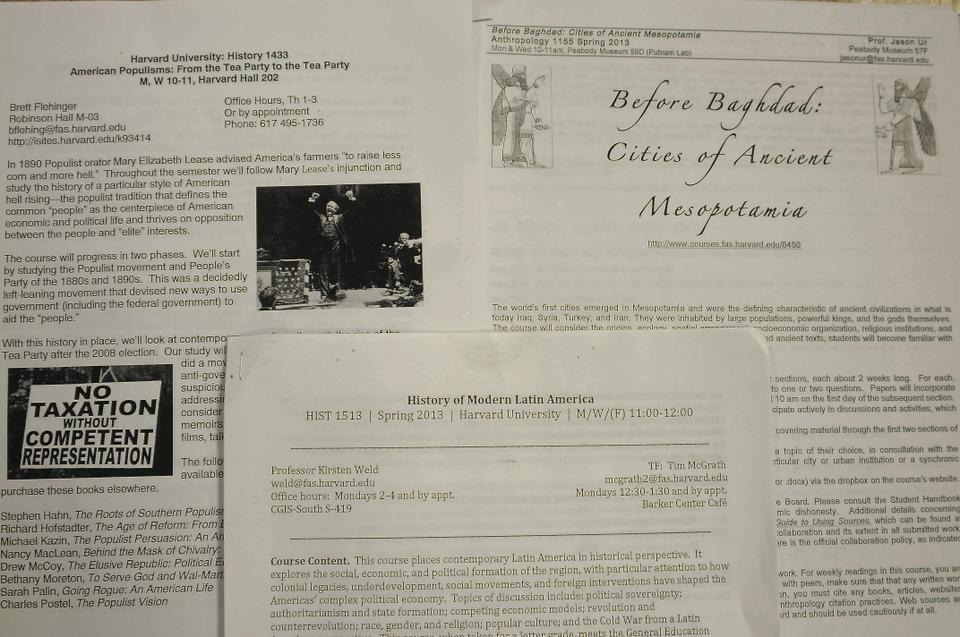 Students collect syllabi on the first day of shopping week Monday. As a result of the Government 1310 cheating scandal, all professors were required to include on their syllabi an explicit collaboration policy.
By Madeline R. Conway, Crimson Staff Writer

Among crowded classrooms and stacks of syllabi, professors outlining their collaboration policies have become a common theme of opening lectures.

Before shopping period began on Monday, Dean of Undergraduate Education Jay M. Harris reminded faculty members that they are required to include an explanation of their collaboration policies on course syllabi, Jeff Neal, a spokesperson for the Faculty of Arts and Sciences, wrote in an emailed statement.

The start of the semester arrived less than a week after Harvard administrators announced that they had concluded their investigation of the Government 1310 cheating scandal and reached verdicts for the approximately 125 students involved.

On Monday, students who shopped Government 40: “International Conflict and Cooperation” heard an explicit explanation of what was and was not acceptable collaboration. Assistant government professor Dustin Tingley said he followed the administration’s recommendation to detail his policy precisely on the syllabus and then briefly went over the protocol in class.

“I certainly gave it front and center attention, and I think that’s attention it deserves, just so that there is clarity between faculty and students on the rules of the class,” Tingley said.

Adam M. Butensky ’13 said that students in Stem Cell and Regenerative Biology 90: “Classic Experiments in Developmental Biology” had a discussion with professor Douglas A. Melton about collaboration during the first lecture.

Butensky noted other classes he had shopped did not bring up their policies in lecture, even though all instructors were required to include it in their syllabi.

For his class Linguistics 107: “Introduction to Indo-European,” professor Jay H. Jasanoff dedicated a paragraph of the syllabus to his policy, which states that students may collaborate on homework assignments but not on take-home exams.

“[A collaboration policy is] obviously important, and it’s more important because there has been this cheating scandal,” said Jasanoff, who drew attention to his rules during the first lecture. “It’s good to spell it out explicitly.”

Though Caroline Light, the professor of United States in the World 26: “Sex and the Citizen: Race, Gender, and Belonging in the United States,” did not devote class time to explain her policy, she made her statement a prominent feature on the course’s iSite and syllabus. She also encouraged her students to spend time reading the policy.

“Hopefully that will signal to students that I take these things very seriously,” Light said.

Light’s policy describes the importance of students’ understanding the definition of plagiarism and encourages them to ask for help if they are ever in doubt of their citations.

Tingley said the new emphasis on collaboration speaks to the dedication of professors to their students.

“I think a lot of faculty really care about the best teaching practices, and I think this just highlights our commitment to that,” Tingley said.

—Staff writer Madeline R. Conway can be reached at mconway@college.harvard.edu.