"Miss Margarida" Gets Her Way 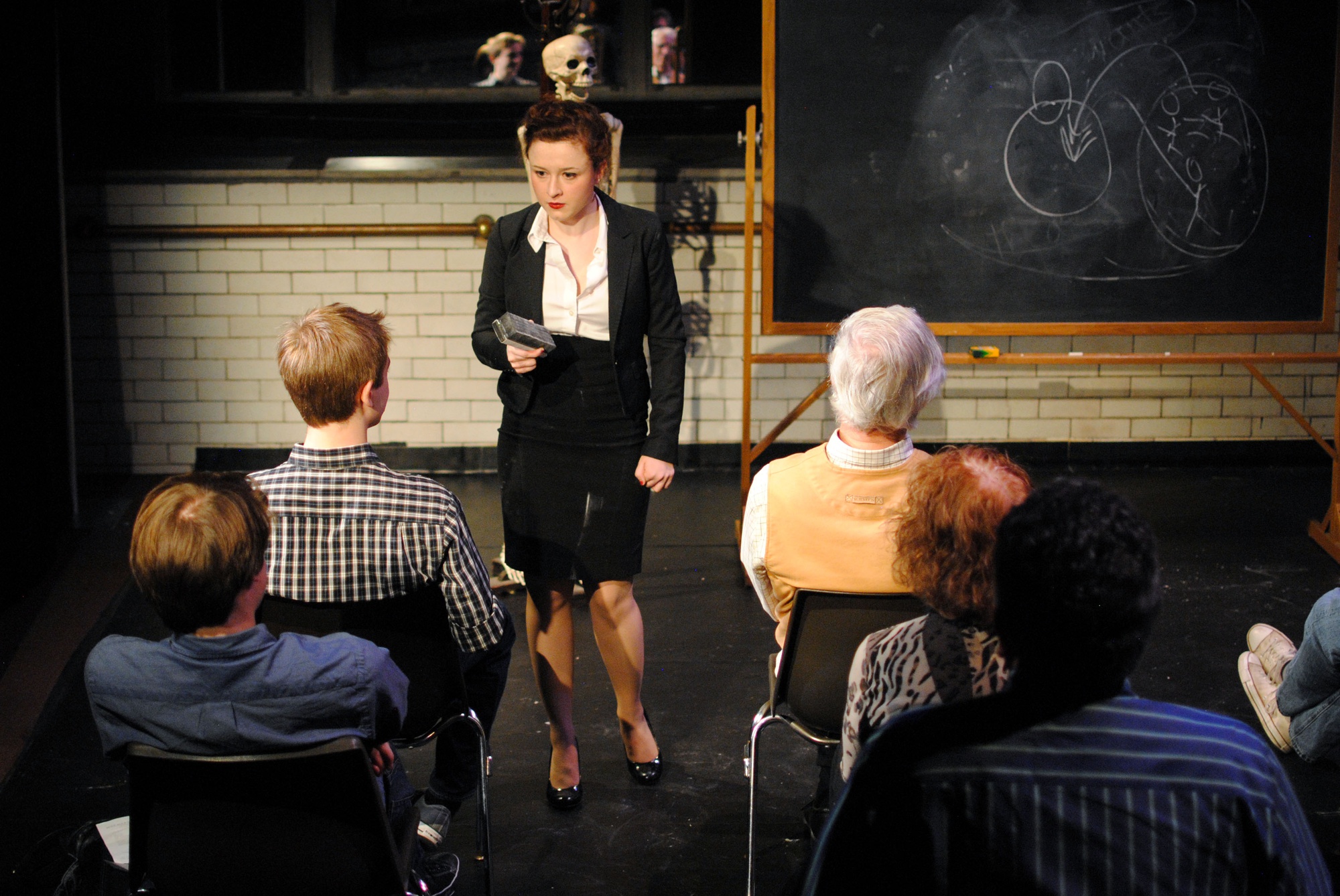 Elizabeth K. Leimkuhler ’15 presides over her class in a production of “Miss Margarida’s Way” in the Adams Pool Theatre.
By David J. Kurlander, Contributing Writer

Only about 25 people were lucky enough to get seats for each performance in the Adams Pool Theatre to see the bravura performance by Elizabeth K. Leimkuhler ’15 in “Miss Margarida’s Way,” Brazilian Roberto Athaye’s wrenching one-woman show about authority. The play, written during the height of Brazilian dictatorial repression in the 1970s, stars a high-strung and strict eighth-grade teacher, Miss Margarida, as an exemplar of power. The teacher informs and berates the audience, who stand in as her class, about a number of macrocosmic issues including death, sex, probability, and religion, becoming increasingly manic as she gets closer to dangerous fundamental truths. Universally applicable, the play, buoyed by Leimkuhler’s kinetic honesty in the role, challenges the audience to examine their possible blind adherence to teachers and societal constructs.

The set and presentation of the play claustrophobically reinforced the concept of an intimate classroom. An assistant producer led attendees through the narrow hallways of Adams’ House basement, telling them to use their cell phones “at their own risk” and to find assigned seats in the theater. The four rows of classroom chairs, on the same level as the stage, further suggest a compact and simplistic eighth grade room. Miss Margarida sits behind her desk, hands fidgeting, watching with intensity as her students look for their name cards on the chairs. On stage near Miss Margarida are a blackboard, a skeleton, and as a modern-day update, a Macbook Pro.

After all are seated, the teacher rises and begins to address her students. From the start, Leimkuhler’s intensity and honesty made her impossible to ignore. Hovering just on the brink of sanity, she spoke with impeccable diction and paced across the room, tugging at her perfectly starched skirt and tucked-in button down. Full of almost incomprehensible energy, Margarida presents her concept of school as an inevitability comparable to birth. She writes key words maniacally on the board, her head bobbing up and down with every letter. Even before she begins attacking audience members and becoming caught up in psychosexual manipulation, it is obvious that Miss Margarida is not representative of a disciplinary ideal, but rather the harsh and pervasive archetype of the paranoid pedagogue.

Leimkuhler’s consistent adherence to her complicated character was astounding. A master both of diction and oratory strength, as well as expression and physicality, she presented a portrait of a woman deeply damaged by the intensity of her need to rule her class. Whether yelling explicit sexual come-ons at particular members of the audience or asking her oft-repeated query, “Is there anyone named Messiah in the class?” Leimkuhler’s portrayal was fully formed and without fluctuation. Her ability to navigate the potentially overblown character without becoming a parody of herself or losing any of her initial subtlety was a testament to the strength of her preparedness and devotion to the role. Despite her deplorably narcissistic and often violent attributes, Leimkuhler’s Margarida retained elements of vulnerability, particularly near the end of the show. In those vulnerable moments, she gradually talked herself into an immobilizing rage, making it impossible to discount her humanity completely.

Although Leimkuhler broke the fourth wall throughout the play, her strongest moments came when she communicated directly with her students. In graceful interludes staged by director Joey R. Longstreet ’16, Margarida paced through the aisles between the seats, stopping to leer straight into the eyes of individuals while accusing them of being “queers,” deviants, or drug-users. In a climactic moment seemingly representative of a denial of death, she smashes the class skeleton to bits, arms and legs flying into the audience. Initially silent and passive despite Miss Margarida’s provocations, the audience eventually begins to rebel against their imagined teacher, presumably of their own volition. They are driven by Margarida’s oppression—as citizens of a dictatorial government are likewise driven to rebellion—to write swear words on the board during the fifteen minute “recess,” or raise their hands to ask challenging questions during a hilariously contradictory presentation on the deadly dangers of marijuana.

Contradiction most aptly describes the content of Miss Margarida’s teachings. She decries sex education while unleashing X-rated erotic tirades, touts the unavoidable nature of school while commenting upon the endless possibilities in life, and repeatedly reminds her pupils of her love of order while her lessons fall further into anarchy. With a lesser actress, these contradictions could have become a bit repetitive and grueling after a while, and perhaps Athaye even intended them to be so. Yet as Leimkuhler became more neurotic and inconsistent in her convictions, her character simultaneously solidified. By the last scene, when Miss Margarida collapses in a fit while trying to verbally summate the universe, her spell is fully cast. Leimkuhler got up off the ground, brushed herself off, and tacitly apologized for her outburst as the bell rang, signaling the end of her character’s descent and a brilliant theatrical exploration.