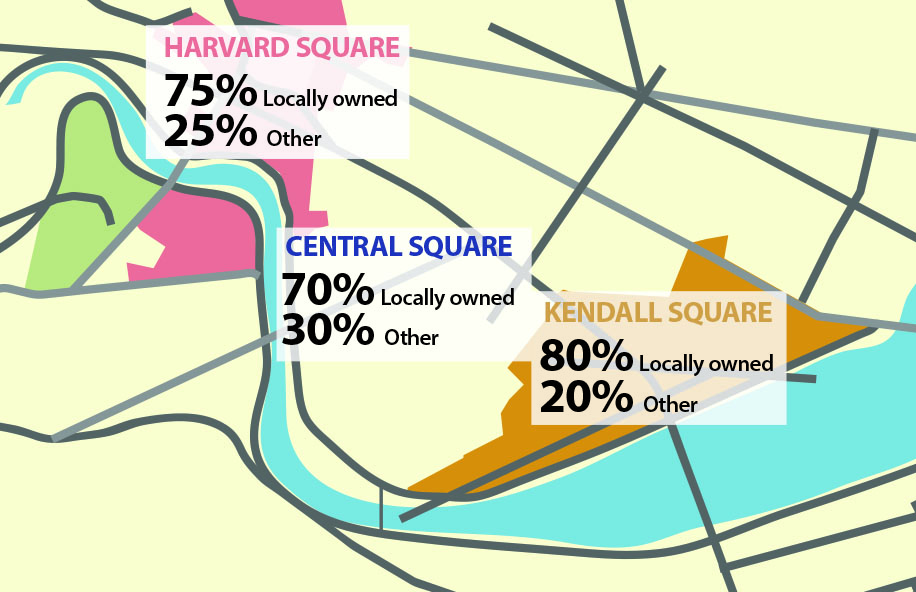 Several weeks ago, City Council candidate Marc McGovern perched on a swivel stool at the Harvard Square diner Leo’s Place on JFK Street to discuss his vision for the future of the area. As he spoke, he glanced periodically out the window, watching people rush back and forth past the Tasty Burger storefront across the street.

“How do we insure that Leo’s gets to stay here?” McGovern asked. “It's an establishment. It’s important for the fabric of our community.”

Over the last few years, national franchises, such as Starbucks, Yogurtland, and Shake Shack, have made Harvard Square their new home. In a series of interviews, city council candidates said that these chains have simultaneously edged out local stores and restaurants. Some of these candidates adamantly hoped to reverse the trend, but others expressed little concern.

Many City Council candidates have continued to emphasize that Cambridge must work to preserve the eclectic flavor that makes Harvard Square so unique.

To many candidates, policies on licenses and rents should be crucial tools to maintain that balance. But few candidates could articulate cohesive plans for reform—primarily because the City Council sometimes does not have the tools at its disposal to enact sweeping changes. For example, Cambridge has bylaws that leave licensing to a separate commission rather than the council.

City Council candidates voiced concerns that national chains have entered many areas and have particularly encroached too far into Harvard Square—an area that was once primarily the domain of small businesses and mom-and-pop shops.

Over the last few months, an influx of national stores has prompted some candidates to fear that the character of Harvard Square and Cambridge as a whole could become swallowed up by a sea of chains.

But candidates disagreed about how to combat the loss of local business. Some suggested that the city ought to foster opportunities for new small businesses.

For example, Nadeem Mazen, a candidate who opened two education start-ups in Central Square, has advocated for using city grants to promote start-up businesses. He envisions those grants going to artistic and cultural business endeavors.

Mazen said he especially hopes to attract innovative businesses to the developer-owned and university-owned spaces that often remain vacant—a trend he partly attributed to the City Council, business associations, and universities not communicating enough.

Cambridge needs a “framework that is friendly to local business with grant programs,” Mazen said. “Unless we more clearly exclude formula businesses, we're going to see a lot of fast food and a lot of formula restaurants.”

Other candidates echoed a desire to prevent formulaic chain stores from entering the Square and instead foster a balance between local and national businesses. They said they hope for a practical combination of diverse, eclectic stores and traditional businesses such as banks and pharmacies.

“The mix of businesses is really important,” McGovern said. “Having small, locally-owned businesses and larger chain businesses is good. The reality is that you need a place to bank.”

Harvard Square still boasts a diverse set of businesses: burger joints, hardware stores, and even a shop dedicated to honey-themed products and another to hemp clothing.

Still, some candidates noted glaring gaps. For example, Harvard Square’s 7-Eleven, which closed last year, was one of the few Square stores that sold basic foodstuffs.

“I love Tasty Burger, but I miss 7-Eleven,” McGovern said. “Where do you go to buy a coke in Harvard Square or—god forbid—munchies at 2 a.m.? That’s a loss.”

McGovern and House both said they hoped that Harvard Square might eventually see a convenient, reasonably-priced grocery store that could cater to local residents.

Some candidates suggested that the increase in the tourism industry in Harvard Square has led businesses that serve local residents to fall by the wayside.

Candidate Elie Yarden remembered when The Harvard Coop was a department store that carried a variety of goods.

“Now it’s taken up by Harvard souvenirs,” he said. “Tourism is an important industry, but it shouldn’t be only tourists. The stores here should also supply the needs of the community.”

McGovern also commented on the prevalence of tourists in Harvard Square. To McGovern, striking balance requires accommodating the needs of locals and tourists alike.

“This is obviously the tourist center,” McGovern said. “That has to be taken into account. You have to make sure that people feel safe and welcome in a destination spot.”

Kendall Square, an area of Cambridge that has recently undergone a massive redevelopment push, changed zoning bylaws to accommodate smaller businesses that sometimes struggle to afford the rent on massive properties. The altered zoning requirements have particularly encouraged mixed-use development.

The city-sponsored K2C2 plan, a planning study on Kendall Square and Central Square, also benefits the push. Some candidates said they would like to see the Cambridge City Council conduct research and enact similar reform for Harvard Square.

“We can zone for areas to allow small businesses to open up,” House said. “The K2C2 plan would help achieve this in terms of what to do when the local businesses are being priced out and making sure the residents don’t leave as well.”

Other candidates said they planned to combat the actions of landlords that partly stymie local business. Jefferson R. Smith encouraged an open dialogue among landlords and the city, remarking particularly on the tendency of landlords to hold out for longer contracts with tenants and thus leave storefronts empty for prolonged periods of time.

Yarden called for an even stricter approach to mitigate the effects of out-of-reach rent for small business owners.

“Everything is money. It’s not supply and demand. Rent control is a necessity. A big problem in Cambridge is the wealth,” Yarden said.

Although a plurality of candidates decried the exorbitant rent prices facing business owners in Harvard Square and Cambridge at large, many noted that the City Council would probably be unable to reverse the trend.

Current City Councillor Minka Y. vanBeuzekom, who is running for reelection, said that as long as property owners decide they want certain rent prices, the city wields little power to change the situation.

“The only way to effectively bring rents down is to make [Harvard Square] a less attractive place to live,” Leslie said. “[Rents] probably will rise until businesses no longer want to be there.”

GETTING THROUGH THE SYSTEM

“I want Cambridge to be a place that’s accessible to everyone,” said candidate Luis Vasquez. “That doesn’t only mean for housing. That means business, as well.”

Despite that desire, the process of securing business licenses in Cambridge poses an obstacle for some potential tenants. The Cambridge License Commission issues licenses to aspiring business owners around the city and enforces rules regarding the sale of alcohol. The commission, which includes a chairman and representatives of the fire and police departments, holds hearings twice a month where they vote on the proposed licences.

Although a separate entity, the License Commission occasionally collaborates with the City Council. Mazen said that the current complexities of license acquisition mean that mainly those with millions of dollars for large projects have the ability to navigate the system, which threatens the small-business culture of the city.

“I’ve seen first hand how challenging it is, and if we're not going to rewrite the laws, we at least have to be proactive about educating people on how they can get throughout the system,” Mazen said.

Several of Mazen’s fellow candidates expressed a similar goal of streamlining the licensing process. Mushtaque Mirza said he hopes to create a more unified plan rather than granting licenses on an case-by-case basis.

Others, however, said they are content with the status quo.

Current City Councillor Leland Cheung, who is up for reelection, said that Cambridge has a far more transparent licensing process than Somerville or Boston. Cambridge is more willing to work with potential business owners, he said.

Candidate Gary Mello said he was satisfied with the increased number of non-transferable licenses issued in Harvard Square.

But regardless of where they fall on licensing regulations, some candidates seemed reluctant to interfere with the License Commission. Indeed, the Council has historically abstained from interfering with the Commission—as Seidel suggested, perhaps because the lengthy process of obtaining a license plays an important role.

“We can always look at making governmental process more efficient,” Seidel said. “But we are always going to want to have some process because voices need to be heard and we need to work of the conflicts that emerge.”