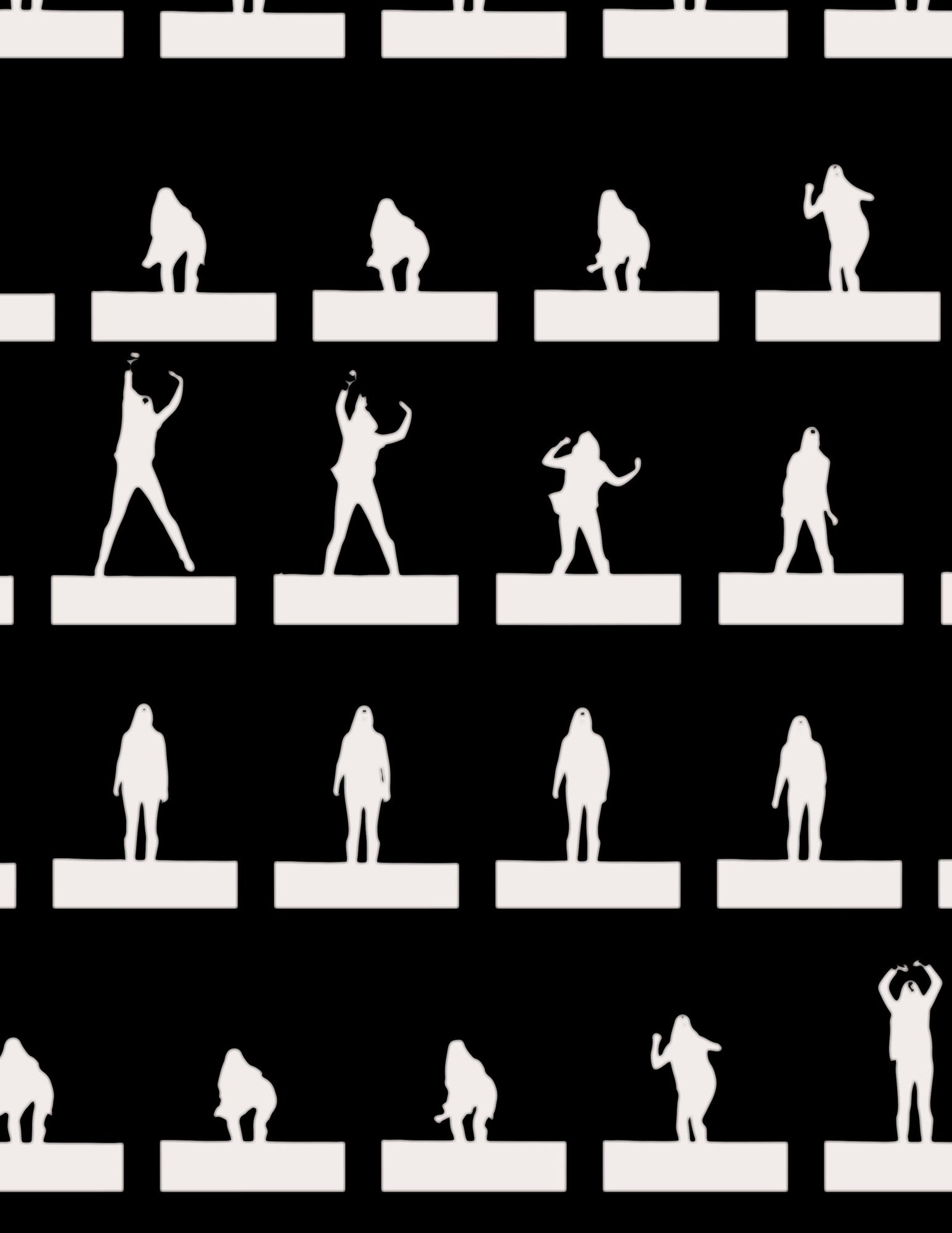 At Harvard, animators must balance the workload of a normal student with an incredibly time-consuming craft.
By Laya Anasu and Brianna D. MacGregor, Crimson Staff Writers

It takes 10-20 hours of work to produce 2-3 seconds of animation. For most people, that is an inconceivable amount of time for so small a product. In order to devote themselves fully to their art, many students who wish to create animation professionally choose to enroll in art schools. At Harvard, however, there is a small group of students who pursue animation via a track in the Visual and Environmental Studies Department, balancing their massively time-consuming craft with a liberal arts education.

Though the VES animation teaching staff is small and rotates regularly, VES Professor Ruth S. Lingford has been at Harvard since 2006 as the only permanent faculty member specializing in animation. “The idea of appointing me was to give the discipline of animation more stability, more long-term thinking,” she says.

According to Lingford, most students at Harvard come to animation as beginners and combine the practice with their other courses of study. However, she noted that there are a few students every year who are involved in animation seriously—this year, there are four animation-related theses, the highest number ever.

Before coming to Harvard, Lingford primarily worked with graduate students whose studies were focused on animation. She said that she is constantly impressed by her students’ ability to produce engaging finished work in a very short time, especially considering the typical Harvard student’s heavy courseload.

“The most exciting thing is when [students] realize the potential of animation to do other things, to connect with their passions,” Lingford says.

When he was 11, Zachary L. Wong ’16 started doing stop-motion animation with Legos. Since then, he has tried a variety of styles, combining both live-action and animation. One of his animations is about a homeless man who dreams of being an airplane pilot.

“More of my recent stuff is very character-based,” Wong says. “I’m very interested in trying to portray things as realistically as possible. I don’t bring in too [many] fantastical elements.”

Creating even short pieces like Wong’s four-to-five minute clip about a homeless man, however, is so labor-intensive that it can be difficult to balance with school work. “Animation is such a tedious and time-consuming process,” Wong says. “During the school year, I usually write and set out the storyboard.” Wong then creates the actual animations during winter and summer break.

While some animators work off an already existing script, Wong fashions his own, generally thinking up the title first. “[The title] serves as the premise, and as soon as I have that, I start animating, and I kind of flesh out the story as I go along,” Wong says, “[It’s] very mercurial…very organic.”

The process of creating an animation also requires an understanding of the many different elements that go into a short clip. Much of Wong’s knowledge is informed by his childhood experimentation. Through stop-motion, Wong learned how to convey mass and gravity. Through painting and drawing, Wong learned how to become a good draftsman. All of these lessons, mixed with an understanding of movement and motion, gave Wong the tools he needs to create his works.

“Animators are the best filmmakers that are out there because on a day-to-day basis, they deal with movement,” Wong says. “If you reduce film to its basic elements, it’s just about capturing movements.”

Pixar and and its parent company Disney are two of the most prominent studios in the field of animation. But while these companies typically produce three-dimensional, hand-drawn, and CGI animation, there are many forms of animation beyond the ones showcased by these studios.

Although she had never done animation before coming to Harvard, Stella Fiorenzoli ’15 always had an interest in art and drawing. After arriving on campus, she decided to enroll in Lingford’s freshman seminar “Animation—Getting Your Hands on Time” and loved both the class and the art of animation.

For one of her class projects, Fiorenzoli filmed herself walking around Harvard, then rendered herself as a cartoon. As she went along, everything she touched turned into a cartoon as well. The final product was a five-minute video of 15 frames per second. To make a video like this, Fiorenzoli used a technique called rotoscoping.

“[Rotoscoping is] where you take a live film and you trace things in the scene, then remove the image and all you’re left with is the drawing,” Fiorenzoli explains. “You can capture live movement with a drawing to make your animation realistic. I really loved it because it was magical. You just draw it and it comes to life.”

Another popular form of animation is claymation, a type of stop-motion animation. Artists sculpt their characters and convey movement by making slight changes in the position of the figure, taking pictures at each step. The images are then compiled into a video to make it look as though the character was actually moving.

According to Fiorenzoli, the technique is time-consuming, as the movements from frame to frame can be minute. “The difference has to be small enough for the motion to be fluid.”

TOOLS OF THE TRADE

Fred C. Hua ’14, one of the four students doing a thesis in animation this year, originally intended to concentrate in Human Developmental and Regenerative Biology. After taking an animation course with Lingford the spring semester of his sophomore year, however, his passion for art swayed him to concentrate in VES and study animation. "I went in thinking, ‘Oh, I care about science’…[But] I'd rather have creative freedom," Hua says.

Hua describes the animation and filmmaking classes at the College as mainly theory-based. “It’s hard to improve on technical skill, but [the classes do] sensitize you to art, which is helpful and something I feel not everyone gets,” Hua says.

Over the summer, Hua worked at a company that required him to do 3D animation. Coming back to Harvard, however, he found that there weren’t many 3D animation resources available.

“[The department] currently has one dedicated 3D software, and that’s Autodesk Maya,” Hua says. “As for asking the department for software, it’s hard because there’s no one around to teach it. It’s kind of useless when you don’t have the interest or the push because many students are intimidated by 3D.”

However, students do feel that the VES Department does provide many useful resources. “We didn’t pay for anything, [the] studio was available 24/7, and [we were] given high-quality cameras to use on campus and rent out for the weekend,” Fiorenzoli says.

Oliver Luo ’13, who is currently in Prague learning puppet animation from Czech animators, agrees. In an email, Luo wrote, “[There are a] tremendous amount of resources,” referring to the funding from the department, the studio facilities housed in Sever, and the staff and faculty. “I think I was definitely spoiled with support from basically everyone.”

FROM HARVARD TO DISNEY

Hua’s perception of a disconnect between the animation classes Harvard offers and the skills needed in the real world is echoed by Susan L. Bin ’16, for who animation is much more than a hobby. Bin, who plans to concentrate in VES and study filmmaking, has been animating for years. Her experiences with art school have shaped her opinion about how Harvard’s approach the creative process, including animation, differs from that of traditional technical schools.

“Someone here comes at it with this very liberal arts point of view, like ‘Where does this fit into the way I educate myself?’” Bin says. “Whereas at the traditional technical schools, they’re like, ‘I can’t breathe without animation.’ Harvard kids tend to be less affected in that way, less emotionally involved.”

Bin, who hopes to one day work in a large commercial animation studio, has considered the difficulties of breaking into the industry from Harvard. “When it comes to the arts disciplines, having anything that says you’re from Harvard doesn’t impress anyone,” she says. “Harvard likes more fine arts and conceptual work, which is not at all what these companies look for.”

Although Bin has found the arts atmosphere frustrating at times, she notes that the differences between Harvard and the traditional art school are understandable because of Harvard’s liberal arts focus. “I kind of see Harvard as this weird break period for me, four years to do all this incredible stuff. And then I’ll return to what I really want to do.”

Animation itself is a taxing process. Added on top of schoolwork, it’s even harder. According to Luo, one of the greatest challenges of animating is time and timing. “You would want to have solid chunks of hours to set something up and just get all the way through with the shoot,” Luo wrote. “That becomes somewhat difficult when, you know, we are being college students at the same time.”

Luo identified an additional challenge in the fact that many studio VES classes are significantly longer than the usual one-and-a-half-hour or two-hour classes. Some VES studio classes can stretch to five hours per class.

“Once you’re lucky enough to have found an animation class that fits into your schedule, you’ll have to find whole afternoons or evenings where you can work without interruption,” Luo wrote.

Although it wasn’t easy to balance out animation and schoolwork, Luo was able to figure it out. “It’s sort of universally true that Harvard kids get themselves into way too many classes and extracurriculars,” Luo wrote. “So you just have to figure it all out either ahead of time or as you move along.”

Many of the students interviewed agreed that animation at Harvard is rather small and not necessarily well known. “It’s not particularly popular or hip, as it seems to me that people didn’t even know or expect that there’s animation at Harvard,” Luo wrote. “Aside from my classmates in my animation classes and the fellow thesis friends who have done animation, there wasn’t much of a community, mainly because there just weren’t that many of us.”

However, Luo feels that the few people in the animation scene were able to bond really well and that the small size translated into close bonds with professors and TFs. “In that sense, the community is really closely knit.”

However, some of Harvard’s animators feel estranged from the Harvard animation community. “There are a lot of people interested in film and some people that are curious about animation, [but] I haven’t met any animators, actually,” Wong says. “I wish there was a little bit more cohesive community of animators.”

Collaboration is particularly important to animation given the tedious, painstaking nature of creating the films. “Opportunities to collaborate [are] a huge thing,” Wong says. “That’s something that I think would be really nice.”

“SOMETHING OUT OF NOTHING”

Though animation is time-consuming, tedious, and sometimes frustrating, it is the boundless sense of possibility that draws students in. “You could have a love story between a salt and pepper shaker…[You can] make everyday objects have a story,” Fiorenzoli says.

For Hua, much of the charm lies in the inevitable imperfections that accumulate. “In such a medium, you have to churn out frame by frame quickly. You end up making a lot of mistakes, and you’ll see that [in your animations], and it’s really beautiful,” Hua says. “Art is defined by its mistakes.”

Bin says she enjoys the storytelling element of animation. “You’re literally creating something out of nothing and then making it live. [Animation is] a business, but it’s a business out of making magic, which is what I find incredible.”

Luo agrees. “Animation has the power to really reach down into common human experiences and touch everyone, children and adult alike,” he wrote. “It is frankly pretty fantastic to imbue life into inanimate things the way animation can do. You labor for hours, and then at the end, magic happens.”

—Staff writer Brianna D. MacGregor can be reached at bmacgregor@thecrimson.com.