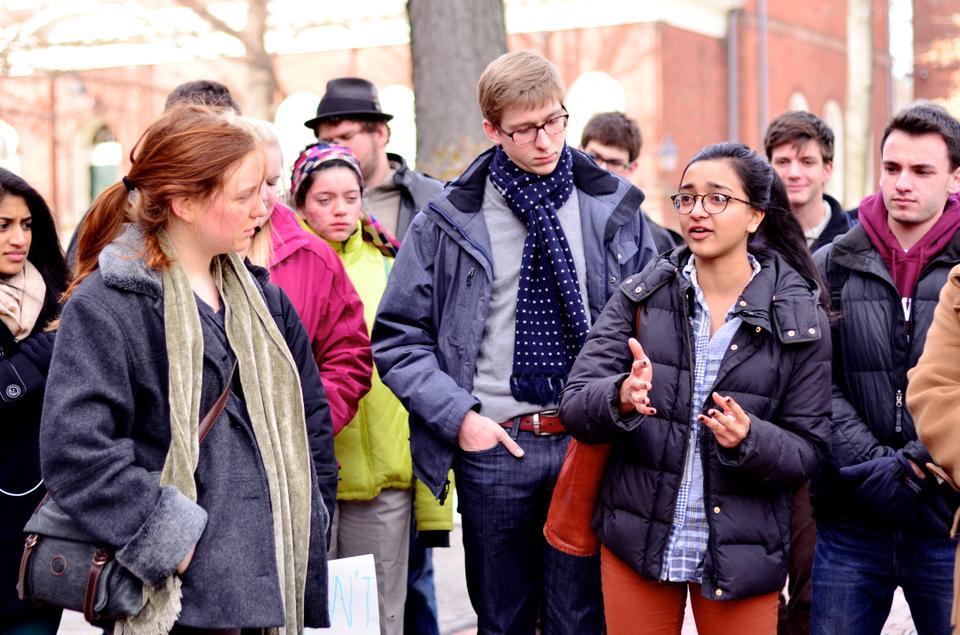 Chanting the words “Reform mental health” and “Our Harvard can do better,” a group of more than 150 students gathered in front of Massachusetts Hall Friday afternoon to urge administrators to take action on mental health.

“The drumbeat of student voices for reform is growing, but change is happening too slowly,” Undergraduate Council President Tara Raghuveer ’14 said in an interview. “It's our responsibility to step in and advocate for students.”

The rally came one day after an anonymous Crimson op-ed written by an undergraduate student with schizophrenia generated dialogue in dining halls, on email lists, and on social media sites about perceived flaws in mental health services at Harvard. Also on Thursday, Director of Harvard University Health Services Paul J. Barreira spoke at a Committee on Student Life meeting to present several University mental health initiatives, including the hiring of a number of full-time psychiatrists whose work will be devoted exclusively to improving students’ mental well-being.

At Friday’s rally, the demonstrators arranged themselves into a large circle, and for one hour, shared personal experiences with UHS and brainstormed a list of specific demands from the administration. That list, in addition to other signs written by demonstrators, was hung on the facade of Massachusetts Hall, which houses the offices of University President Drew G. Faust and other senior administrators.

“I lost 4 friends to suicide in 6 weeks. I’m not better,” read one sign. “Harvard we are MAD,” read another.

Twenty minutes into the rally, Assistant Dean for Student Life Emelyn A. dela Peña entered the circle and offered a warm room for students to discuss their concerns with administrators and Barreira.

“We are willing to sit down, we’ll listen for as long as you want us to be there,” said dela Peña.

Although demonstrators turned down the offer and continued their discussion outdoors, dela Peña promised that administrators would review the signs and pass along the list of demands.

During the discussion, students called on Harvard to clarify its policies regarding leaves of absences, provide students with advocates within the system, ensure that financial resources do not prevent students from obtaining care, personalize what one student characterized as an “impersonal” system, and hire more therapists to cut down on wait times.

Late Friday, UHS spokesperson Lindsey Baker released a statement in response to the op-ed that sparked the rally.

“The health of Harvard students and all of our patients is of the utmost importance and we consider it to be our top priority,” Baker wrote.

In her statement, Baker wrote that there is no monetary cap on prescription drug benefits through the Harvard University Student Health Program, which covers mental health and other health services and is available to all registered students. Baker also wrote that UHS offers need-based financial assistance through a special Medical Hardship Fund and “makes every effort” to schedule appointments in a timely manner.

“Anyone with an urgent need can usually be seen within 24 hours, and anyone with an emergency can be seen almost immediately,” she wrote.

In the hours before the rally, undergraduates mobilized to promote the demonstration via House mailing lists, Facebook, Twitter, text messages, and word of mouth. Some student groups—including “Our Harvard Can Do Better,” which campaigns for reform of Harvard's sexual assault policies voiced support for the demonstrators’ cause or asked members to attend.

“The Our Harvard Can Do Better campaign recognize that mental health intersects with sexual violence,” the group wrote in an email sent over the Harvard College Democrats email list. “We, the student body will stand together in holding our school accountable for its policies that too often have driven many of us to despair and failure.”

“UC reps are attending this rally to stand in solidarity with people on this issue of mental health on campus, as well as to listen to the people present to better understand the students' asks, so we can work toward a solution,” said Zhu.

Council representatives ended the rally by promising an open forum with administrators, UHS representatives, and House Masters to be held within the next two weeks. The UC will also devote time during Sunday’s general meeting to discussing mental health, according to Raghuveer.

Following the rally, a new Facebook group called Coalition to Reform Mental Health Services at Harvard was launched. The group aims to provide “a platform to bring together those on Harvard's campus who support improving mental health.” By Saturday afternoon, the group had amassed 110 members.