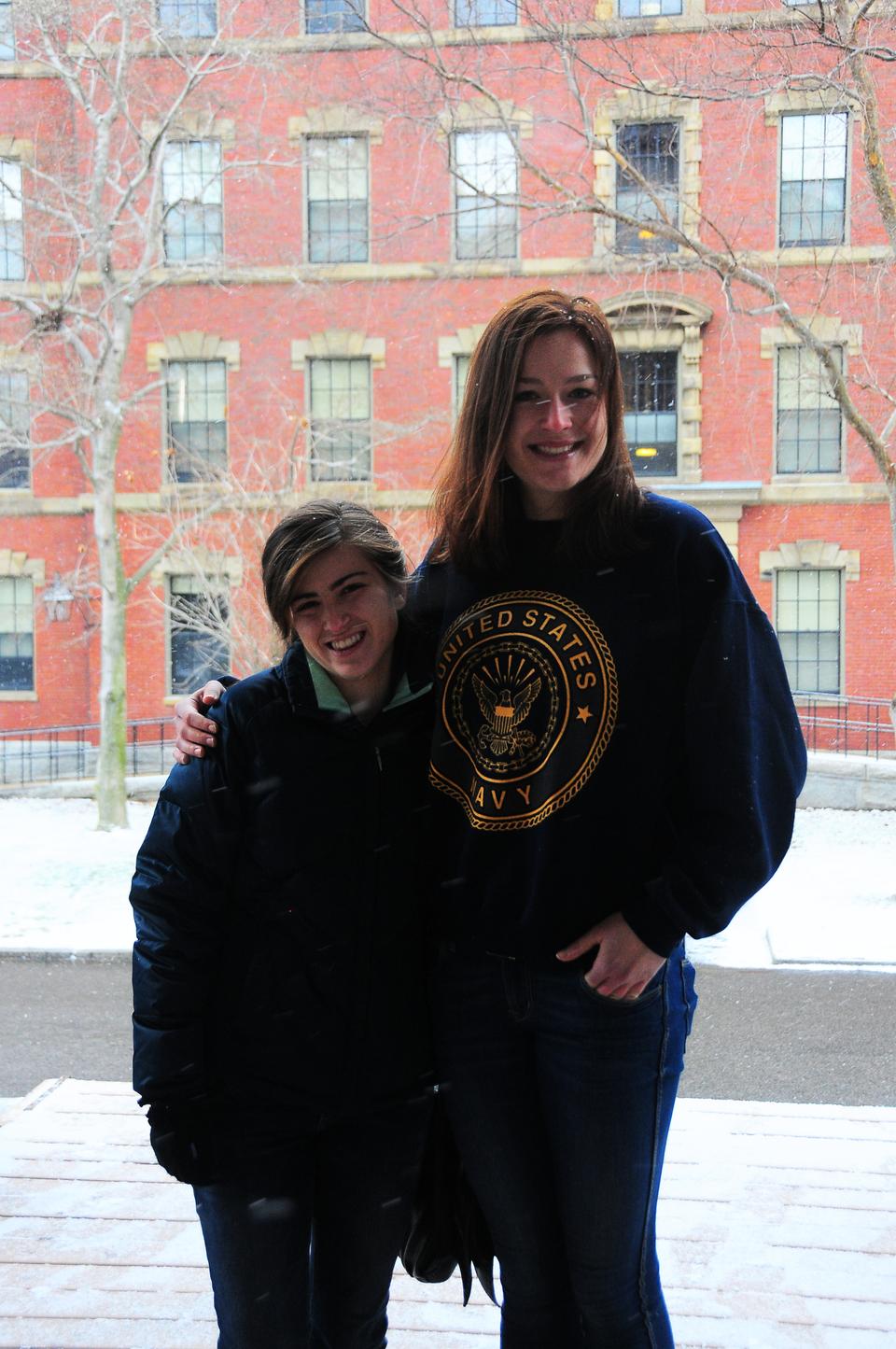 Women on the Battlefield: ROTC Responds

Three times a week Charley M. Falletta ’16 beats the sunrise awake. Physical training at 6:30 a.m., an early-morning military science class, a weekly leadership lab: These commitments frame the rhythm of Falletta’s weeks here at Harvard in her position in the U.S. Army Reserve Officers’ Training Corps. The terms of Falletta’s ROTC scholarship will require her to complete four years of active duty, plus four on reserve. None of these roles would necessarily bring Falletta into combat. But beginning in January 2016, for the first time, they could.

Two weeks ago, Defense Secretary Leon E. Pannetta announced that the Pentagon would overturn the military’s official policy banning women from serving in combat forces. The ban has been in effect since 1994. Pannetta’s announcement was met with widespread acclaim from those who say that reversing such policies promotes equality and fairness and recognizes of women who have already served in de facto combat roles in the past. Detractors claim that differing physical abilities and the danger of sexual crimes perpetrated by the enemy, for example, will threaten the security of the armed forces abroad.

For the ROTC cadets at Harvard interviewed by FM, the issue of serving in combat is often not a personal one. “It’s not what I want,” says Madison L. Coveno ’14, an Air Force ROTC cadet, referring to entering combat. The force’s brassy blue uniforms have always been comforting to Coveno, reminding her of her childhood: Her father was in the Air Force for 20 years. In general, according to Coveno, Air Force pilots play a relatively indirect role in combat. “Personally,” she adds, “I want something a little more intellectually stimulating.”

While women make up around 14 percent of all armed forces, Coveno estimates her field training group to be about 25 percent women. Falletta, meanwhile, says that her battalion—made up of cadets from Harvard, Tufts, and MIT—is about 40 percent women. “Not everyone is going in who wants to be in infantry,” says Falletta. Infantry, or combat roles, are far from the only possible path for women in ROTC, whose roles could include public relations, leadership positions on American bases, or other non-combat duties.

But as the number of women in the armed forces continue to grow, and as the terms of the Pentagon’s announcement continue to be debated, other lingering questions are being dredged up: What is it really like to be a woman in the military? To what extent has an older, male-dominated norm remained?

None of the students contacted for this article claim to have felt discriminated against as women in ROTC. “I’d speak very highly of all the cadets, especially the Harvard cadets,” says Falletta. She acknowledges that physical differences do exist between males and females in ROTC, but hasn’t felt any kind of prejudice (despite her petite five-foot frame).

Coveno agrees, at least with regards to Harvard. During a summer training camp, though, she recalls an incident involving a leadership simulation, in which some cadets were required to move sand bags and others patrolled the surroundings. The male leader immediately set the three women present to be the guards. “We took offense against that,” says Coveno. “We said, ‘hey, we can carry sandbags. We’re not weaklings.’”

Nevertheless, Coveno doesn’t see this kind of event as a major roadblock. “You run into things,” she says, “it happens, but you can solve it—you can talk about it.”

Carolyn F. Pushaw ’16, a member of Naval ROTC, has experienced similar instances of tension. Pushaw completed a program similar to but unaffiliated with ROTC in high school. “There was surprisingly a lot of sexism,” she says of the program.  Pushaw claims that on one carrier, for example, the officer in charge treated all of the females present differently from their male counterparts. He wouldn’t let the women go anywhere without being in a group, and would bar them from certain activities, Pushaw says. “I’ve found that in ROTC it’s a lot more equal,” she adds.

Pushaw has also become frustrated with the distinct physical standards to which male and female cadets are held. While a woman can pass the required run—a mile and a half—with a 13:30 time, a man must complete it two minutes faster. For Pushaw, all members should be held to the same standards—even, and especially, as women join in combat. “If only two women can pass through to infantry,” she says, “that’s what should happen.”

“They shouldn’t change standards to encourage women to do it,” she adds, “because that will compromise their overall operations.”

In reality, as multiple news sources have reported, women have been in positions of direct combat since the 1994 ban. More than 280,000 women have been deployed to Afghanistan and Iraq, 800 have been wounded, and over 130 killed, according to The New York Times. The armed forces’ definition of “combat,” however, rests on a delicate web of bureaucracy in which language can make or break a promotion.

"I think it’s been a real slap in the face to women who were, frankly, serving in combat, to say that these positions were barred to women,” says Falletta. Without holding one of these positions, opportunities like going to ranger school or infantry training, in addition to being promoted, were also closed to women. “So essentially,” Falletta adds, “women were serving alongside men, but men were receiving this training that women hadn’t received.”

“So I think,” she concludes, “this is hugely important.”

Coveno agrees that some of the greatest impact of the change will involve women who have already served. “Even though they’re functionally there, being put in under-fire situations,” she says, “they’re not getting credited for it.”

Pushaw, despite her frustration with different physical standards between men and women in the military, fully supports the introduction of women into combat roles. Particularly in the current conflict, she says, women will be of direct use on the front lines. In many Middle Eastern cultures, she says, “There’s such a gender divide that we need women to associate with Middle Eastern women in situations where men can’t really do that.”

Pushaw acknowledges that the gender relations in the military are far from perfect. Sexual harassment and sexual assault are worryingly high in the armed forces now, according to the media. Yet she says she believes that introducing women into combat could be fundamental to addressing this issue. “If men had to rely on women in situations in which they might protect their lives,” she says, “they would see them less as objects of sexual desire and more as equals.”

“This is one of the last bastions of a really gender-segregated institution,” Pushaw says. “How will that ever change unless we start now?”

Note: All those interviewed for this article agreed to speak in their capacity as individuals, not as official representatives of any ROTC.