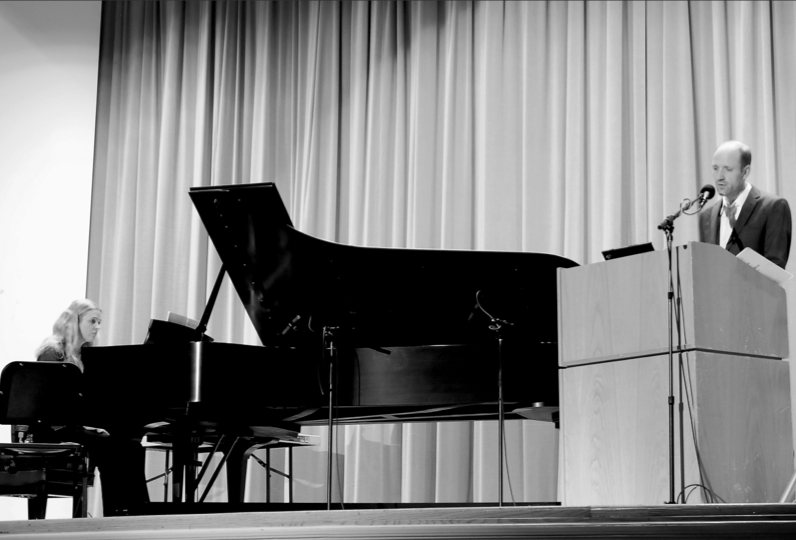 It may seem paradoxical to use words to describe the experience of stripping words of their meaning. This is the premise behind “Uncanny Val- ley,” a multimedia spoken word perfor- mance that took place on Thursday at Paine Hall. Jon Woodward, author of the poem “Uncanny Valley,” was joined onstage by his wife, Oni Buchanan, who is a pianist, and accompanied by the music of composer John Gibson and a wide range of pre-recorded digital sounds. Words played only a supporting role in this intense and unusual performance, which was meant to shock like the car crash it describes.

Woodward, who works as a curato rial assistant at the Harvard Museum of Comparative Zoology, is known for his eclectic poetic projects, which include a 40-foot-long poem written by typewriter on a single roll of paper. Buchanan, herself a poet, is a graduate of the New England School of Music and the University of Iowa Writers’ Workshop. Gibson is a well-respected composer and has written pieces for a variety of ensembles.

The event was a joint production of Harvard’s Woodberry Poetry Room and Ariel Artists, a classical music management organization that aims to connect talented artists with concert presenters and audiences appreciative of innovative music.

Woodward said his poem had two influences: a nightmare that he had in which he may or may not have caused a car crash that killed innocent people, and the phrase “uncanny valley.” This expression, coined in 1970 by roboticist Masahiro Mori, describes the drop in empathy that humans have when interacting with robots that look and act increasingly human.

To toy with this idea, Woodward said illogical statements and inverted and repeated them until they lost all meaning. Phrases such as, “What thoughts wreck thoughts / Could I rubberneck those?” were collapsed and ran together like bumper cars. Rather than narrate the story linearly, Woodward wanted to make the audience undergo their own dizzying experience with a distorted reality.

The performance consisted of 16 poetic components, read through continuously. The more the words were repeated and sustained, the faster their meaning slipped away. This phenomenon is known as “semantic satiation.” In this common psychological experience, a word that is repeated loses all meaning and becomes nothing more than sound.

Since he was reading his own poem, Woodward was at liberty to repeat words and whole phrases as much as he wanted. “I might repeat this from 0 to 225 times,” he said at the beginning, half in jest. Woodward has delivered the work 10 times, altering it each performance, since the work debuted at the University of Michigan, Ann Arbor, in September 2012.Woodward commissioned Gibson to compose an original concert-length score to accompany his words, although the piece does not deliberately illustrate the poem. “I wanted there to be enough variety of sounds to sustain the audience for the full hour,” Woodward says.The combination of meaning- less words, piano music, and digital sound—all playing at once—was overwhelming.

According to Woodward, the rhythmic pace of the performance was intended to make it difficult to process and rationalize. Buchanan’s jazzy play- ing ran over the words with anxious trills, eerie chords, and loud bangs, recreating the drama of a car crash. To traverse the range of human and robotic noises, Buchanan moved while at the piano, plucking and scratching its strings, playing up and down in dynamics. In contrast, Woodward delivered his equally jarring sentences in a calm and soft-spoken voice.As divergent and free-spirited as their individual performances might have seemed, they were closely synchronized with Gibson’s digital soundtrack—composed of mashed-up recordings of robots, music by com- poser Robert Schumann, and Wood- ward’s own poetry—which Woodward controlled from his laptop. The words and music at once amplified each other and clashed, creating a sonic house of mirrors.The structure of the performance encouraged audience members to linger over what Woodward calls the“visible fissile ribbons” of the poem’s language. Yet, the performance left no time for reflection. It combined several common elements—poetry, electronic and live music, and a commonly ob- served psychological phenomenon—to produce an original and disconcerting artistic experience.

—Staff writer Katya Johns can be reached at kjohns@college.harvard.edu.

An earlier version of this article incorrectly stated that composer John Gibson is Irish.

An earlier version of this article stated that classical musician managing organization Ariel Artists connects virtuosic pianists with visionary composers. To clarify, the group aims to bring together artists with concert presenters and audiences appreciative of innovative music.