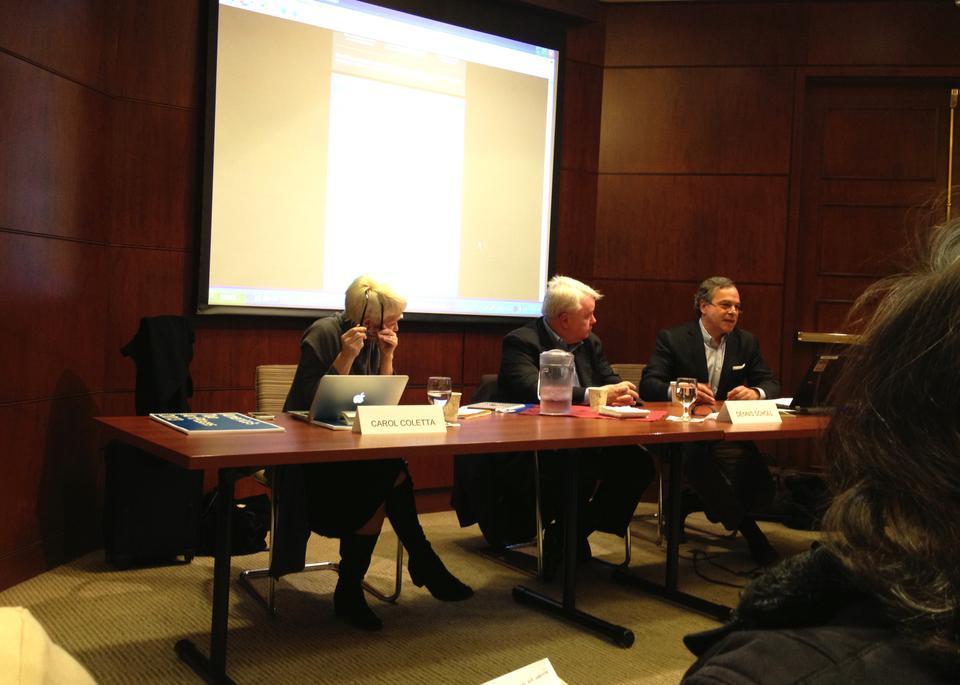 Carol Coletta, President of ArtPlace, Dennis Scholl, the Vice President for the Arts at Knight Foundation and Jim Bildner, Adjunct Lecturer in Public Policy at HKS share the latest research around the issues surrounding the relevance of arts and the linkages between capitalization, demography and participation and what the future holds for the arts.
By Katya Johns, Crimson Staff Writer

The Harvard Kennedy School is known for impassioned speeches and debates about the current state of politics, not of art. Yet on February 28,  students and faculty from the Graduate School of Design and the Graduate School of Education squeezed into a small room of HKS’s Taubman Building for a panel entitled, “Are Arts Relevant in a 21st Century World?” organized by the Hauser Center for Nonprofit Organizations. Within five minutes, one of the panelists, Carol Coletta, director of the nonprofit organization ArtPlace, answered with a rhetorical question: “Is breathing relevant?”

After her joking retort, the panelists moved on to practical discussions. Rather than discuss the initial prompt, the panelists used their time to consider concrete initiatives for making art more relevant.

There was no doubt among the panelists that the place of the arts in contemporary information society is under siege. Jim Bildner, who moderated the event, and is a Senior Research Fellow at the Hauser Center specializing on the sustainability of the arts in US cities, reported that foundational giving to the arts declined by 10 percent since the 2007-2009 recession. Though they are now beginning to recover some of their financial footing, Bildner said, arts and cultural institutions can no longer rely exclusively on the patronage of artistic elites, who flock to the opera, theater, and ballet in dwindling numbers.

Dennis Scholl, the other panelist and Vice President of Arts for the Knight Foundation, a private nonprofit for media innovation, proposed a solution. “The only way the arts can stay relevant in the 21st century is by becoming part of the community and allowing more people to participate,” he said. To that end, Scholl talked about the national initiative he launched called “Random Acts of Culture,” which organizes spontaneous flash mobs to Beethoven’s “Ode to Joy” and opera performances in public malls, as well as other cultural events.  In a clip that he showed of one of these acts, unsuspecting bystanders showed their enthusiasm by whipping out their iPhones rather than actually participating. But Scholl did not seem perturbed by this reaction. “How many people in a concert hall participate? The point is they were there to witness it,” he said after the panel.

Coletta, also a former Knight Foundation fellow, has taken up Scholl’s concept of taking the arts to the streets but has the art a more permanent setting. Her organization, ArtPlace, has awarded $26.9 million in the form of 80 grants to 76 organizations in 46 places in the US in cross-collaboration with leading artists, banks, municipal governments, federal agencies, and the National Endowment for the Arts. “[Our mission is to] put ‘art’ at the ‘heart’ of portfolio strategies to transform community,” she said.  What this means is investing in the arts a profitable and sustainable public-private venture. ArtPlace is unique, however, in not thinking about urban art as beautification but as “creative placemaking,” which, according to ArtPlace’s website, is a strategy that aims to use art to revitalize overlooked spaces.

Instead, as a seasoned CEO,  she discussed the metrics used to measure the projects’ success: the “vibrancy” and “diversity” they add to the community. “These metrics can be fuzzy,” she said. However, much data-collection and reporting went into their calculation, Coletta said to the audience.

More than one audience member took issue with the metrics. Other audience members questioned why art needs to produce a return on investment to be valuable. At this point, Bildner spoke up. “Of course art is inherently valuable. The question is whether it is being valued by as many people as it could,” he said.

The two panelists’ aspirations have a common thread: to popularize the arts and their practical applications and to shift conversation about the arts away from the Barker Center and into the Kennedy School, thus making art an effective policy tool for change.

—Staff writer Katya Johns can be reached at kjohns@college.harvard.edu.