Menino Era Expected To Come to an End 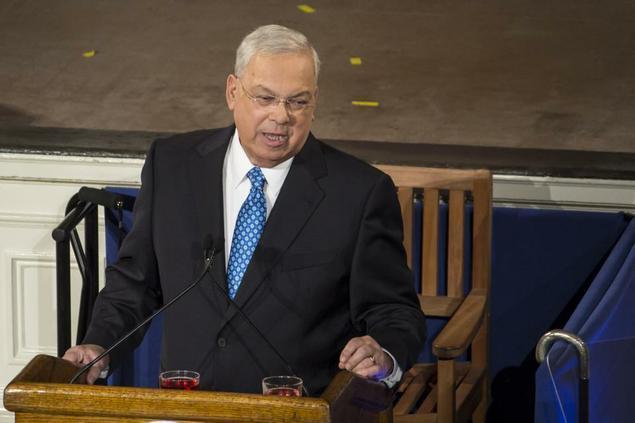 Boston mayor Thomas M. Menino, pictured at the State of the City address in January, is expected to announce Thursday afternoon that he will not seek a sixth term in office.
By Matthew Q. Clarida, Crimson Staff Writer

Menino, 70, will depart after serving as mayor for 20 years.

Much of his last term was punctuated by lengthy hospital visits. Most recently, he spent over two months in the hospital from October to December and was eventually diagnosed with type 2 diabetes, blood clots, a respiratory infection, and a broken vertebra.

Even so, Menino would have likely succeeded in defending his office had he sought reelection. In a 2009 poll of adult Bostonians, 57 percent of respondents said they had personally met Menino, and in five mayoral elections he has never won by less than 10 percent of the vote.

His current approval rating, according to a Boston Globe poll conducted this month, is 74 percent.

John R. Connolly ’95, an at-large Boston city councillor, is the only major candidate to have entered the race thus far. In the recent Globe poll, which asked respondents who they would support in a head-to-head contest, 21 percent of respondents said they would vote for Connolly, while 50 percent backed Menino.

In an email sent to supporters after it was confirmed that Menino would not be running for reelection, Connolly thanked Menino for his service to the city.

“We need to have an informed debate and discussion about Boston’s future and the many challenges facing Boston,” Connolly wrote in the email, “but today is not that day. Today is a day to thank a great man for being a great Mayor.”

Raised in the Readville neighborhood of Hyde Park, Menino entered politics in 1983 when he won election to the Boston City Council.

In 1993, he became president of the Council and, when then-Mayor Ray Flynn was appointed ambassador to the Holy See, Menino was elevated to the mayoralty.

In the mayoral election in the fall of that year, Menino won his first election for mayor with 64 percent of the vote.

In the twenty years since, Menino has prioritized equal access to education, affordable housing, enforcement of gun laws, and Boston’s “green revolution.”

November 5, 2013, will feature the first mayoral election since 1991 that does not include, in his own words, “Tommy Menino from Hyde Park.” Menino’s term will expire in early 2014.