Men's basketball is headed back to the NCAA Tournament after a victory of Cornell, coupled with Princeton's loss to Brown 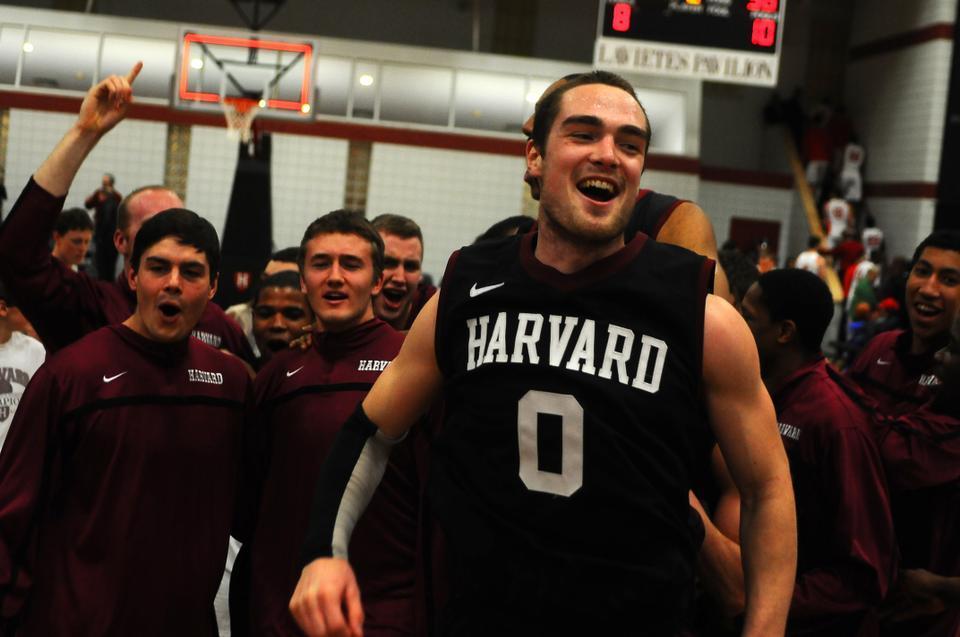 Though the Harvard men’s basketball game was long over, a sizable crowd lingered at Lavietes Pavilion on Saturday night, huddled around various computer screens, eagerly awaiting updates on made and missed free throws taken 60 miles away. The Crimson had just closed out a victory over Cornell, 65-56, and with that, captured a share of the Ivy crown.

But a bigger story was in the works in Providence, R.I. Princeton—the lone team that held complete control over its Ancient Eight championship chances at the start of the weekend—was trailing a Brown team with a sub-.500 conference record and just a few minutes left to play.

Despite getting within five with as few as 40 seconds remaining after two free throws from guard TJ Bray, the Tigers were unable to close the gap any further, eventually falling to the Bears, 80-67.

And with that, less than an hour after securing at least a share of its third straight Ivy title, the Crimson became the second squad in the country to punch a ticket to the 2013 NCAA Tournament.

“I just feel like the basketball gods have been on our sides the entire way,” co-captain Christian Webster said. “To know that we had two home games down the stretch and Princeton had three road games, as Coach said, we would have killed to get in this position, so we are so grateful.”

After an audible yell from the hallway, Harvard coach Tommy Amaker reentered the conference room on the second floor, beaming as he addressed his co-captains and then the press for the second time that evening.

“We’re thrilled about the fact that we are Ivy League champions outright,” Amaker said. “This obviously is a tough league, as anyone who has been a part of it will tell you. As challenging as this 14-game tournament really is, we talk about how challenging it is to win on the road.”

Amaker’s squad will play on college basketball’s biggest stage for the second time in as many years and the third time in program history. Last season, Harvard fell to Vanderbilt, 79-70, in the second round of tournament play at The Pit in Albuquerque, N.M. Two years ago, the Crimson narrowly missed out on NCAA Tournament play, as then-junior Doug Davis beat the buzzer with a jumper to push Princeton past the Crimson in a one-game playoff for the automatic bid.

After co-captains Kyle Casey and Brandyn Curry withdrew from school before the start of the 2012-13 campaign, the preseason media poll tabbed Princeton as the favorite to claim this year’s Ivy title. But Harvard, despite dropping two games last weekend, was able to successfully defend its second championship in school history.

“We always talk about standards, and that is what we live by, not focusing on what other people say about us,” Webster said. “That’s something that we have done all season.... We lost those great guys and those great players but we came here for a reason and that’s to win Ivy League championships.”

Heading into the final weekend of Ancient Eight play, the Crimson sat half a game behind Princeton after suffering two consecutive road losses at the hands of the Tigers and Penn, respectively, to fall out of first place in the conference standings.

“We lost to a [Penn] team [and] we feel we could have won that game if we had played better," Rivard said. "We worked hard all [this] week like we worked hard all season and we had to take care of our business.”

With two games left to play, Harvard needed to sweep Cornell and Columbia this weekend and hope that the Tigers lost at least one game of their remaining three. Two Harvard wins paired with a single Princeton loss would have set the stage for a playoff to determine which team would claim the Ivy League’s automatic bid to the Big Dance.

But Yale and Brown did one better, as Princeton lost both of its games this weekend, handing the Crimson the outright title and opportunity to dance. After closing out the regular season with two wins at home, the Crimson awaits news of its next opponent on Selection Sunday.

“It’s an incredible testament to these two young men who were able to make this happen for our program,” Amaker said of Rivard and Webster. “We are thrilled to be playing in the NCAA Tournament.”