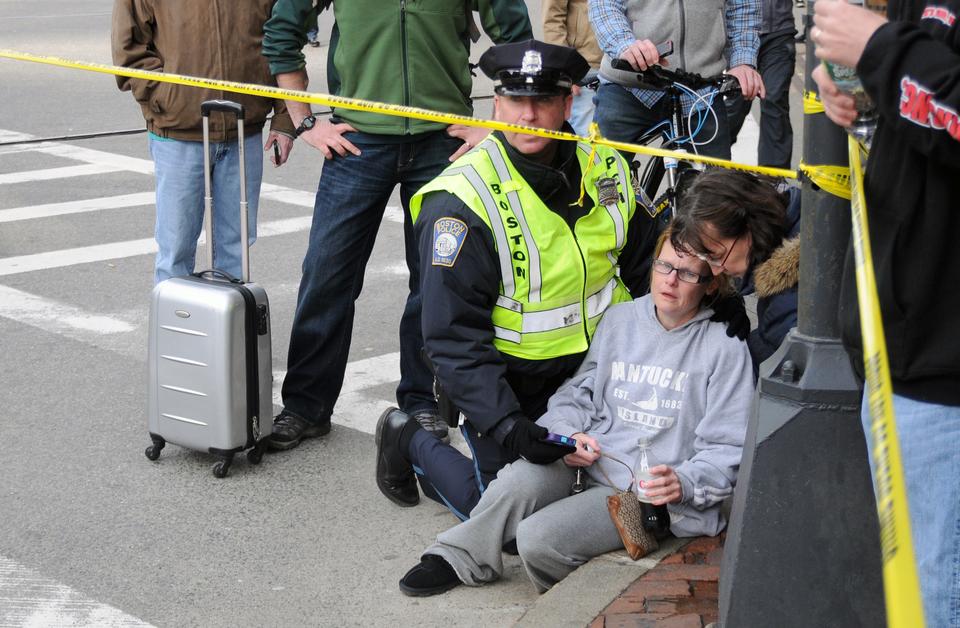 A shocked onlooker of the bombings in Copley Square is comforted by a officer of the Boston Police Department.
By Pooja Podugu, Samuel Y. Weinstock, and Zohra D. Yaqhubi, Crimson Staff Writers

The final mile of the Boston Marathon was transformed into a grisly and chaotic scene Monday when two bombs exploded near the finish line at around 2:50 p.m., leaving three dead and more than 130 injured. Witnesses described dozens of victims sprawled across the course and limbs left lying amid broken glass on a blood-stained Boylston Street in the Back Bay neighborhood of Boston.

Multiple news outlets reported that among the dead was an eight-year-old boy. Late Monday night, CNN reported that at least 17 people were still in critical condition with injuries from the attack, and that doctors were “pulling ball bearings out of the people in the emergency room.”

Late Monday night, Peter J. Fagenholz, a surgeon at Massachusetts General Hospital, told reporters that he and his colleagues had performed “several amputations” that evening.

Dean Smith, a Marathon attendee, was standing near the finish line waiting for his son to finish the race when the bombs went off. He said he sustained shrapnel injuries in his leg and back, and that six hours after the blasts, his ears were still ringing.

“I was feet away from the second explosion,” said Smith, who has no relation to the Dean of the Faculty of Arts and Sciences at Harvard. “My wife said I flew five feet into the air. It was like something out of a movie, and I saw lots of blood.”

After the attack, Boston Police Commissioner Edward F. Davis recommended that residents stay home and not travel outside in large groups. He also said that each package and bag left along the marathon route was being “treated as a suspicious device.”

The Federal Aviation Administration implemented a no-fly zone around some parts of Boston, and traffic at Logan International Airport was temporarily halted to adjust the airport’s runway configuration.

During a press conference Monday night, Massachusetts Governor Deval L. Patrick ’78 called for Boston residents to “be in a state of heightened vigilance” as the investigation of the attacks continues.

Patrick said that the area surrounding Boylston St. will continue to be “locked down” until the investigation is complete.

“It’s not going to be easy, simple, or regular,” he said of mobility around the cordoned-off section of Boylston St.

Establishments surrounding the site of the explosion—Boston Public Library in Copley Square, The Shops at Prudential Center, the Copley Place mall, and the Hynes Convention Center—remained closed late Monday night.

The Massachusetts Bay Transportation Authority’s green, red, and orange lines was expected to resume activity as usual on Tuesday, with the exception of the Copley Station stop on the Green Line, which was expected to remain out of service.

Richard A. Davey, the state’s secretary of transportation, told the Boston Globe that T patrons could be randomly searched, and that there may be state troopers and members of the National Guard at subway stations. Exit 22 off of the Massachusetts Turnpike, which flows directly into Copley Square, was expected to be closed to traffic.

Throughout the city, large numbers of heavily armed police forces and SWAT team members are expected to be out in force.

Amidst the chaos Monday, it was hard for many runners and spectators to discern the origin of the two loud noises, spaced about 12 seconds apart.

Marathon attendee Wendy Lehman, who was awaiting her sister’s arrival at the finish line, said that she first thought the sounds might have been a speaker exploding or a signal that the race was ending.

“Not even a minute later, the second one went off, and we saw people falling into the street,” Lehman said. “The bomb threw them—blasted them back. And we started running in the other direction.”

In the aftermath of the explosions, marathon participants said they had trouble communicating with loved ones and finding transportation away from the scene.

“The biggest problem for a lot of runners right now is getting through the downtown area,” said marathon runner Malcolm Pain. “Subways are closing down, so you know it’s just havoc.”

People at the scene of the explosions lauded the service provided by the hundreds of first responders, saying that their work was orderly and effective.

Gary Varano, who ran in the race with his wife, described the response as “instantaneous.”

“It was organized as it can be,” he said.

The nearly 13,000 medical personnel, many of whom were volunteers, came to the race expecting to treat fatigue and dehydration, but instead found themselves attending to runners and spectators with serious, even life-threatening, injuries.

Pierre A. d’Hemecourt, a doctor at Boston Children’s Hospital, was staffing the medical tent near the race’s finish line at the time of the blasts. Around two hours later, he walked away from the scene with blood on his clothes and tears on his face.

“I knew that, immediately, I had to reorganize the tent,” he said. “The medical tent was used as a mass unit to triage and get people initially stabilized and off to the hospital.”

After the smoke cleared on Boylston St., an outpouring of support rippled across the country. In Washington D.C., Speaker of the House of Representatives John Boehner held a moment of silence, and a somber President Barack Obama addressed the nation from the White House. His short speech, which he delivered from the press room just after 6 p.m., expressed sympathy for the city of Boston and vowed to identify and hold accountable those who were responsible for the attack.

“The American people will say a prayer for Boston tonight,” Obama said.

—Staff writer Elizabeth S. Auritt contributed to the reporting of this story.