Smith and Hammonds Apologize for Handling of Searches at Faculty Meeting 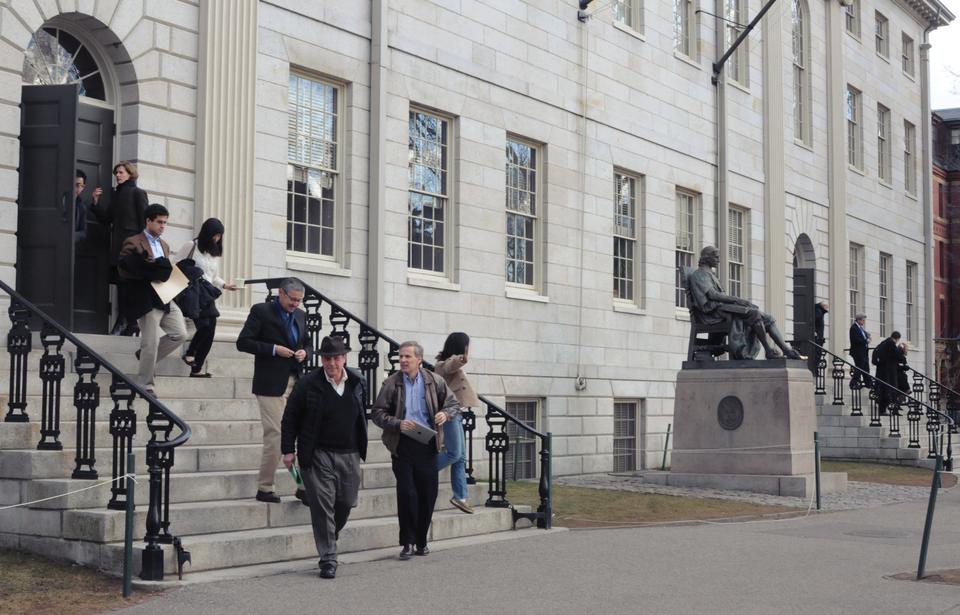 Contradicting a previous statement, Dean of the College Evelynn M. Hammonds told faculty at their monthly meeting Tuesday that she authorized a second round of secret email searches that probed the faculty and administrative accounts of a single resident dean identified as having leaked confidential information about the Government 1310 cheating case.

The second search, which came soon after administrators searched the email accounts of 16 resident deans in September, directly violates the Faculty of Arts and Sciences faculty email privacy policy, which requires the approval of the FAS Dean and the University Office of the General Counsel for any email search. FAS Dean Michael D. Smith said Tuesday that he was not made aware of the second search until March.

On March 11, Smith and Hammonds released a statement which said the searches were “limited to the Administrative accounts for the Resident Deans...as distinct from their individual Harvard email accounts.”

But on Tuesday, Hammonds doubled back on that as she read prepared remarks to a packed room of faculty in University Hall.

“Although I consulted with legal counsel, I did not inform Dean Smith about the two additional queries. This was a mistake. I also regret the inaccuracies in our March 11 communication resulting from my failure to recollect the additional searches at the time of that communication,” Hammonds said.

The disclosure came amidst apologies from top administrators at Tuesday’s faculty meeting, which was the first since news of the searches of the resident deans’ accounts broke in early March. The meeting was expected to primarily focus on an honor code proposal, but ultimately became more of a back and forth between administrators offering explanations and faculty looking to reconcile what many have called a breach of trust.

Speaking in turn at the start of the 90-minute meeting, University President Drew G. Faust, Smith, and Hammonds all acknowledged that the searches had been mishandled. Speaking in somber tones, Smith and Hammonds took full responsibility for the way the investigation was conducted.

“I am left with the undeniable conclusion that, in this case, notification was not done as it should have been,” Smith said in a prepared statement. “I met with members of the Administrative Board, whose membership includes all of the resident deans, and I apologized to them for the mistake. Since I am ultimately responsible for how our policies are applied to the members of our community, I make the same apology to the faculty.”

There are two email privacy policies regarding FAS email accounts, with one covering staff and the other covering faculty. Resident deans, who serve as both administrators and members of the faculty, have both accounts. Only administrative accounts were probed in the first round of searches, thus avoiding a direct violation of the faculty privacy policy.

In their March 11 statement, Smith and Hammonds had said that the resident dean identified by the first search was made aware that the search had occurred shortly after it happened. Whether or not that dean was aware of the second round of searches in advance of their execution was not addressed at Tuesday’s faculty meeting. FAS spokesperson Jeff Neal declined to comment Tuesday evening on when the dean was notified of the second search.

Faust, who previously said she was not made aware of the searches when they happened, told faculty that she commissioned her own study of email privacy at Harvard after the searches became public. She said she determined that Harvard has “never monitored faculty email, and that only rarely does the University access faculty email,” but declined to answer questions from faculty asking her to clarify what she meant by “rarely.”

In her remarks, Faust also offered a frank assessment of Harvard’s existing email privacy policies. The lack of consistent policies across the University, she said, “constitutes a significant institutional failure to provide adequate guidance and direction in a digital environment.”

Faust said she has enlisted the help of Boston lawyer Michael Keating to verify the accuracy of the information about the searches presented on Tuesday. She also announced the creation of a new faculty task force chaired by Law School professor David J. Barron, a former Crimson president, to develop recommendations for a broad new email privacy policy by the end of the Fall 2013 term.

“We must never again have a situation like the one that concerns us today,” she concluded.

Though they were quick to accept administrators’ apologies, faculty members who spoke up at the meeting said reconciliation between the two groups would not be that easy.

“It seems to me that trust has to be based on something,” said classics professor Richard F. Thomas, a member of the Faculty Council. “The request that you make that we have trust suggests there aren’t consequences from this past case that go beyond saying simply, ‘Let’s all talk and get along together.’”

Pointing to faculty’s hesitance in the meeting to address the issue, a number of professors said the case illustrates a larger communication problem between faculty and increasingly distant administrators.

“As the size of the administration has grown over the past 10 to 15 years... it has inevitably produced a sense of unhelpful distance between the administrative decision-making process and the faculty who are affected by it,” said History of Art and Architecture professor Jeffrey F. Hamburger, a member of the Faculty Council. He likened the experience of trying to speak with administrators about certain issues to “waiting to get an audience with Louis XIV in Versailles.”

History professor Maya R. Jasanoff ’96, the faculty’s docket committee chair, said she feels a new, less formal form of communication is needed to ease the existing strain between faculty and their administrators.

Fellow history professor Lisa M. McGirr echoed Jasanoff, suggesting that a docketed discussion about faculty governance be proposed for the May faculty meeting. She characterized the email searches as one of several recent top-down decisions that have created a “gap between the administration and faculty over our sense of our rights and responsibilities.”

For their part, administrators pledged to open new avenues of communication for faculty in the near term and consider longer-term proposals about how they might better communicate.

Because nearly 50 minutes had elapsed before Faust could guide the meeting back to its scheduled agenda, discussion of three docketed items, including an honor code proposal, was limited. Smith’s presentation on proceedings for revising policies on faculty work outside of the University drew no comments. Faculty members who voiced concern over the honor code proposal and another proposal to alter the structure of reading and exam periods focused primarily on issues of trust and communication raised earlier in the meeting.

Responding to Dean of Undergraduate Education Jay M. Harris’s honor code presentation, mathematics professor Wilfried Schmid raised concern over whether or not specific conditions at Harvard had contributed to the Government 1310 cheating case and a general breakdown in academic integrity. He suggested that flawed teaching in Government 1310 and more general attitudes by faculty and administrators could have as large an effect on academic integrity as student attitudes.

“Yes, now students will be asked to sign an academic integrity pledge, but how about us? How about us as faculty?” he said.

—Sabrina A. Mohamed contributed to the reporting of this story.

An earlier version of this article stated that Boston lawyer Michael Keating will help produce a report on past email searches and surveillance at Harvard. To clarify, Keating will work to verify the accuracy of the information about the searches presented on Tuesday.