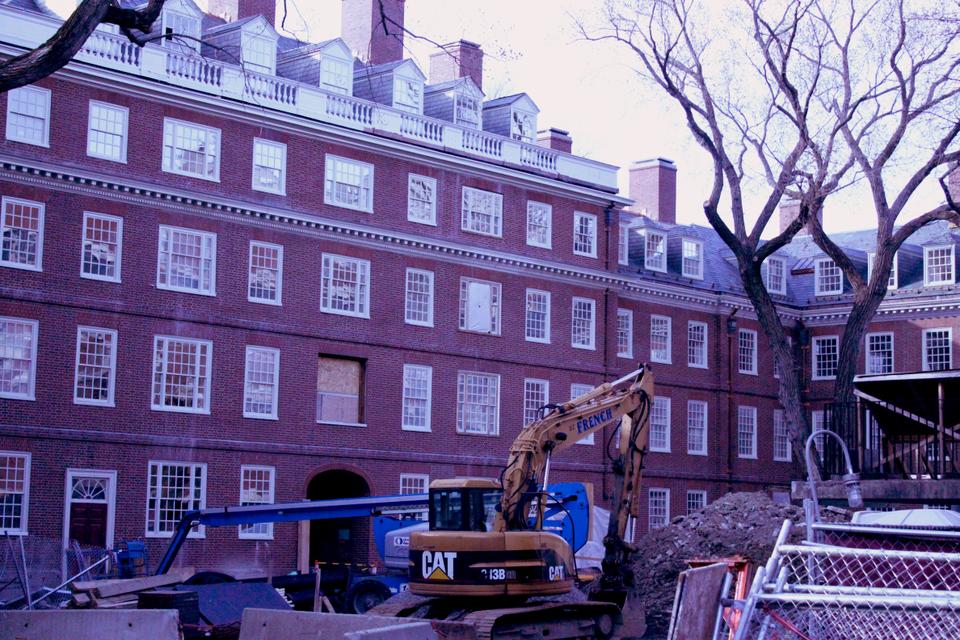 When Old Quincy reopens its doors in the fall after a year of construction, it will feature flat-screen televisions and furniture in every common room, new ceiling fans in every bedroom, and printers on every floor. But upperclassmen, citing perceptions that common spaces in the renovated dorm will not be conducive to hosting parties, the “senior tradition” of living in New Quincy, and uncertainty about what the new living space will actually be like, are instead choosing to live in New Quincy.

According to Quincy House Administrator Larry J. Peterson, rising juniors and seniors are set to inhabit just 64 of 181 available beds in renovated Old Quincy next school year—meaning that upperclassmen, who are favored in the House lottery, will comprise just 35 percent of the building’s population. Peterson added that because the results of the housing lottery have not yet been finalized, this number may rise slightly.

Harvard administrators have long predicted that state-of-the-art furnishings and a modernized layout would make Old Quincy the envy of Harvard’s residential system. Once renovations are complete, Old Quincy will be evenly split between two types of rooming set-ups: the “cluster community,” a space in which between 10 to 16 students live in single or double bedrooms close by a shared common room, and the traditional Harvard suite with bedrooms branching off of a central private common room.

Steve Needham, a senior director at Harvard Planning and Project Management, said last year that if they so chose, all seniors and half of juniors in the House could live in a single in the newly renovated dorm.

But upperclassmen aren’t biting. Currently, 149 sophomores and 146 juniors are affiliated with Quincy House, meaning that approximately 78 percent of Quincy upperclassmen have opted not to live in the renovated dorm next year.

“You can’t use [the common rooms in Old Quincy] as a party space,” said Taras B. Dreszer ’14, who opted to live in New Quincy for his senior year next year. Dreszer said he was concerned that the absence of doors on some of the shared common rooms would prevent students from hosting truly private parties.

David W. Welch ’14 agreed, saying, “I only know a few seniors who are going to live in the new building.” Welch and his blockmates will move into New Quincy in the fall.

Many Quincy upperclassmen who are spurning Old Quincy consider the tradition of living among fellow seniors in New Quincy as a perk that comes with seniority in the House.

Lydia K. Chung ’14 cited a “senior community” as the reason why she wanted to live in New Quincy.

Former Quincy House Committee co-chair Catherine G. Katz ’13 said that even with the option of Old Quincy rooms that have never been occupied, the tradition of living in New Quincy was deeply ingrained in the House community.

“I think people who have seen juniors and seniors live on the third and the sixth floors respectively have pictured themselves doing the same for several years now and haven’t been able to see themselves living elsewhere,” Katz said.

Quincy House Master Deborah J. Gehrke said that she was glad to see that the renovated portion of the House will include a mix of class years. She added that the suites on the sixth floor in New Quincy have remained popular with seniors, who typically vie for quads with four bedrooms and a large common room.

The uncertainty of what the newly renovated building would have to offer also deterred some upperclassmen from opting to live there next year.

“New Quincy, you know about the rooms firsthand from students. Renovated Old Quincy is a surprise, it’s hard to tell,” said Chung.

The renovation of Old Quincy was chosen as the “test project” intended to serve as a model for Harvard’s ambitious $1 billion plan to eventually renew all 12 upperclassman Houses. Construction on Leverett’s McKinlock Hall will begin in June and span throughout the next academic year, to be followed by a complete renovation of Dunster House during the 2014-2015 school year.