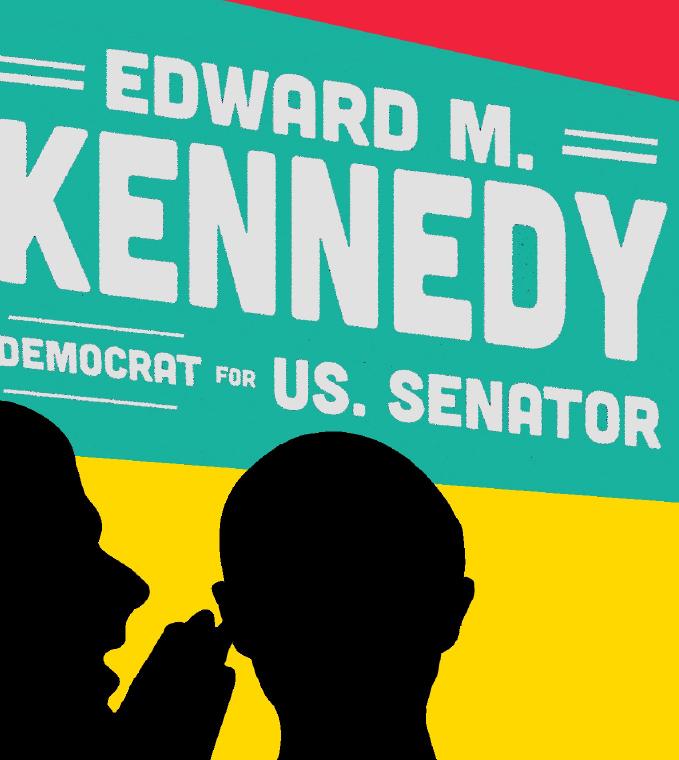 On the morning of Wednesday, November 7, 1962, one might have expected the Editorial Board of The Harvard Crimson to strike a celebratory tone. It did not. The night before, Edward M. “Ted” Kennedy ‘54-’56 had been elected to the U.S. Senate, and though it had supported the ascension of President John F. Kennedy ‘40, the Editorial Board was not at all happy to see youngest Kennedy brother bound for Capitol Hill.

Accusing Kennedy of using his name and wealth to get elected, doing a disservice to voters by not engaging in meaningful debate with his opponents, and being generally unworthy of his new seat, The Crimson was harsh on November 7. “It is with the severest pessimism that we now regard [Ted Kennedy’s] ascendancy,” the board concluded.

Though Kennedy would eventually earn respect and support on campus—The Crimson endorsed Kennedy for reelection in 1964—sentiment on campus supported fellow Democrat Edward J. McCormack in the primary and Republican opponent George Cabot Lodge ’50 in the special election, viewing Kennedy as unqualified and riding the coattails of his presidential brother.

Kennedy in 1962 was seeking the same U.S. Senate seat his brother had held from 1953 until 1960. Running on his brother’s platform, Ted also used John’s original campaign slogan: “He Can Do More for Massachusetts.”

But while the elder Kennedy filled White House offices with Harvard professors, administrators, and graduates—a community that had been enormously supportive of his presidential bid—the younger Kennedy struggled to find support on the campus that both brothers had called home.

According to many students who attended Harvard in 1962, Ted was widely perceived as a man looking to inherit, rather than earn, his place in the Senate. Though Kennedy won the seat in November’s special election with 55 percent of the vote, he came in a distant third in an October poll of Harvard and Rafcliffe students with only 36 percent.

“Teddy was seen as an oafish younger brother with no credentials trading totally on his brother’s success,” Steven V. Roberts ’63, a former Crimson news editor who contributed to The Crimson’s coverage of Kennedy’s senate campaign, wrote in an email.

Kennedy’s reputation on campus as ill-credentialed was not helped by the emergence of information about his academic career at the College.

Sixty years before about 70 students were forced to withdraw from the College for cheating on a take-home exam in Government 1310: “Intro to Congress,” the future Senator Kennedy was asked to leave campus for cheating on a Spanish exam. Kennedy had paid the roommate of a fellow football player to take a Spanish exam under his name. Minutes after the exam ended, Kennedy received a call from the College informing him he would be suspended immediately. After spending two years in the military, Ted returned to the school and graduated in 1956—six years after he took up residence in Wigglesworth in the fall of 1950.

When he launched his senate campaign in early 1962, Kennedy sought to keep the cheating issue under wraps.

Still, the story gained traction in the media after The Boston Globe broke it on March 30. The Crimson Review, a precursor to Fifteen Minutes magazine, featured the scandal prominently in a profile that ran shortly before election day.

But the cheating incident was not the only factor behind the budding senator’s negative reception at Harvard.

“I remember hearing about it, but I can’t fairly say how prevalent that was,” said Todd A. Gitlin ’63, former president of Tocsin, a campus group seeking to promote a more liberal foreign policy and to ban the atomic weapon.

Instead, Gitlin said, rejection of Kennedy grew along with discontent with his brother’s actions as president, particularly his aggressive diplomacy. Highlights of the elder Kennedy’s early foreign policy included a futile invasion of Cuba in 1961 and a barely-averted nuclear crisis in October of 1962.

Both events hurt the president’s support at Harvard. Gitlin said that Kennedy “had lost his glow” in the eyes of campus Democrats.

As frustration grew, so did left-wing groups like Tocsin, which had been promoting more liberal foreign policy since Kennedy’s inauguration and began to organize protests and demonstrations, according to Gitlin.

“There were many protest rallies,” said Gitlin of the campus after the events in Cuba. “We filled Emerson D with 300 people...we could do that very quickly.”

Thus, at least within the gates of Harvard Yard, Ted was hitching his wagon to a president whose popularity was waning. As the September 18 primary approached, major segments of the Harvard community declared support for McCormack, Kennedy’s opponent and the state’s attorney general.

In McCormack’s camp was a group of professors, led by Mark DeWolfe Howe ’28 of Harvard Law School. Howe’s group was soon joined by the Young Democratic Club of Harvard College, despite the fact that the Young Dems were, according to students and the club’s actions, a group of relatively moderate Democrats.

“Many of us thought that Ted Kennedy had no qualifications for the office and no relevant experience,” remembered Henry F. Greene ’63, former president of the Young Democrats, adding that the group was impressed with McCormack’s more progressive platform. Echoing his peers, Greene added that Kennedy “was a viable candidate only by virtue of being the president’s brother.”

A MAN AND HIS LEGACY

While on November 7 the Editorial Board of The Crimson lamented that Kennedy would not be a “thoughtful, independent voice in the senate” or a “representative who comprehends the magnitude of civil rights, civil liberties, and unemployment problems facing America,” Ted would become the fourth-longest serving senator and an icon of progressivism.

He provided influential support for the Civil Rights Act of 1964—which had been proposed by his brother, the President, before he had been assassinated—and, among other things, went on to be the Senate’s champion of education and health care reform.

In 1964, The Crimson Editorial Board endorsed Kennedy for reelection. Former opponents of Ted’s senate campaign acknowledged that they later supported his tenure.

“For what it’s worth, I have increasingly thought over the years that few events in American campus politics have ever so dramatically proven how wrong a campus politician can be in thinking he or she knows much about our politics,” Greene, the former president of the Young Dems, wrote in an email. “I have come to very much regret my opposition to Ted Kennedy’s election in 1962, just as I have simultaneously come to think he was one of the greatest Senators in our history.”