As the renovation of Old Quincy comes to an end, some fear that modernized accommodations might not yield desired improvements to residential life 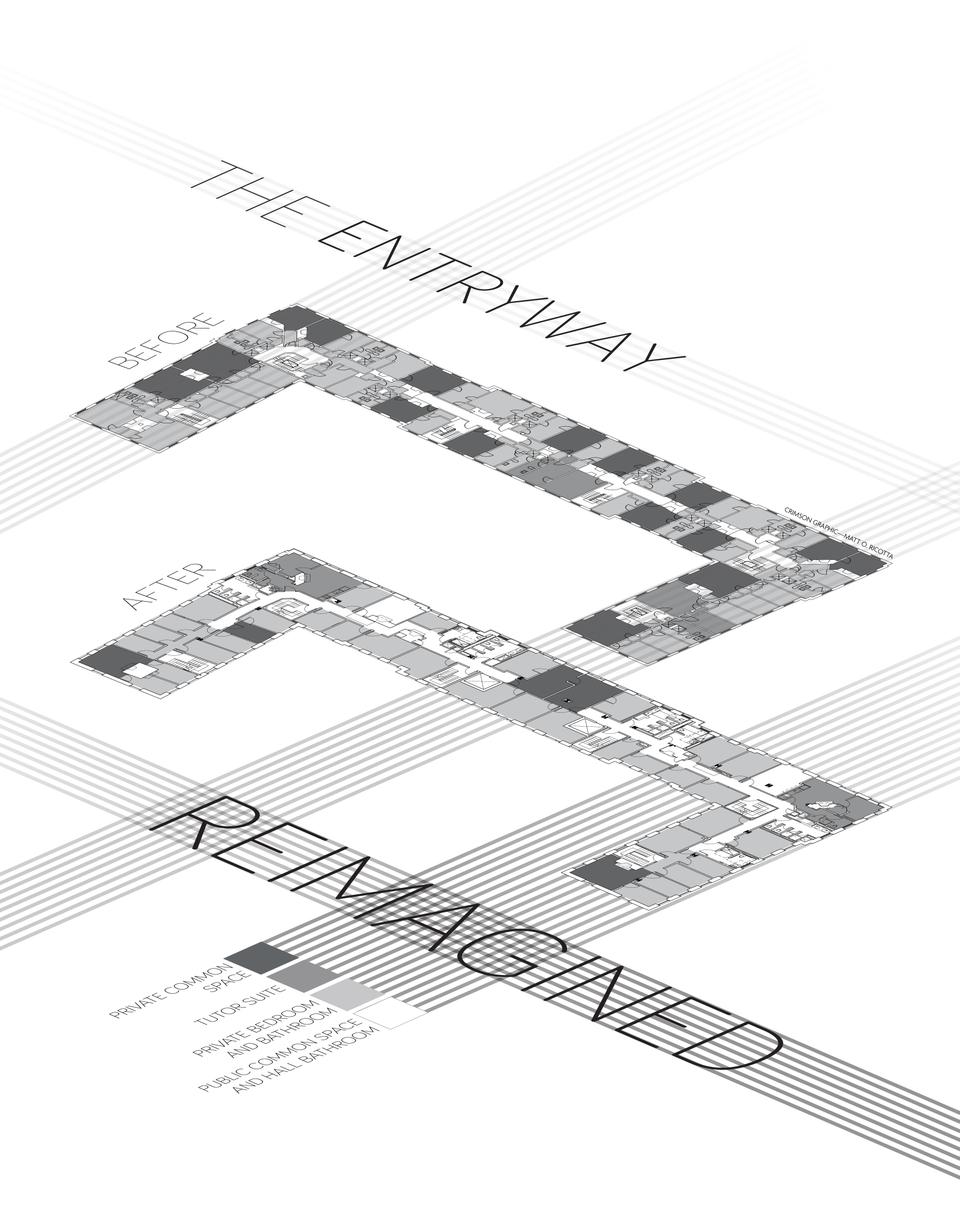 As Harvard undertakes extensive renovations on its undergraduate Houses, spatial changes intended to improve the quality of physical accommodations have the potential to alter the way students interact with their community.
By Elizabeth S. Auritt, Crimson Staff Writer

With cockroach-infested rooms in Dunster, shoebox-sized doubles in Kirkland, and clogged pipes in Adams, the undergraduate residences at Harvard have in recent years become increasingly inadequate to serve the needs of the College’s students.

In 2006, Merle Bicknell, assistant dean of physical resources and planning in the Faculty of Arts and Sciences, realized that the Houses, still historically significant but also physically deteriorated, needed a full-scale renovation.

“There was a realization of the fact that these buildings were over 100 years old,” she said. “In the eight to ten weeks you get in the summertime, you can’t change out an entire [heating, ventilation, and air conditioning] system or change out all the plumbing.”

Striving to live up to the House system’s more than 80-year-old aim of creating a dynamic living-learning community, Harvard embarked on a multi-billion dollar House renewal project in 2008. The project, now in its first phases of construction, will transform the interior of the Houses and give Harvard’s residential buildings a full set of modern accommodations.

“Improving the undergraduate experience is very much a goal of renewal,” said Quincy House Master Lee Gehrke. “It’s bricks and mortar...but the goal is broader than that. That’s done by improving the communities, but also providing new types of spaces.”

As administrators, architects, and students discuss renovation plans, they face the reality that when it comes to residential preferences, one size does not fit all.

But changes to the spatial arrangement of the Houses may also dramatically change the way students use these spaces, and House renewal presents project leaders with the opportunity to shape students’ interaction with their community.

“It really revitalizes not just the space, but the people in it,” said Stephen Lassonde, dean of student life. “It’s really a transformation in their relationship to where they’re living and their community.”

When former Harvard President Abbott Lawrence Lowell, Class of 1877, envisioned the House system in 1929, he aimed to bring Harvard’s students together in unifying communities of their peers. As the College embarks on its first comprehensive renewal effort since then, improving community remains a central goal and physical changes have been designed specifically to foster group interactions.

To adhere to rigorous Massachusetts disability laws and fire codes, architects created a residential model for Old Quincy that incorporates vertical entryways, a facet of the traditional neo-Georgian House model, and short horizontal hallways that stretch across the building and between entryways. Some areas of the House will be configured as traditional suites while others will feature “cluster communities,” in which single and double bedrooms, a bathroom, and a common room branch off from a central hallway.

Administrators said that the addition of horizontal hallways in the renovated layout will enhance social encounters in the Houses by increasing face-to-face encounters.

“Because of the old layout, the people who lived in the first floor didn’t really see the people on the fourth floor,” Gehrke said. “Now it’s going to be much, much better for informal conversations.”

Indeed, seniors who live in New Quincy said they relish the tradition of living together in suites along horizontal hallways because of the strong sense of community such a layout creates.

“You really become a tight-knit community because you really have to walk by everybody at some point. You get caught in the elevator with them and end up catching up,” said Scott J. Yim ’13, a former Quincy House Committee Co-Chair.

Also crucial to these community building efforts are plans to construct common spaces in previously unused or inefficiently occupied rooms, such as those that once housed squash courts or now-obsolete machinery.

“There’s an amazing amount of space in these Houses, but it’s unusable,” said Bicknell.

For example, while all Houses have a Junior Common Room, these more formal spaces currently do not accommodate the many student organizations and other groups who need space around campus, according to Stephen Kieran, whose architecture firm KieranTimberlake designed the Old Quincy renovations.

Kieran’s plans for Quincy introduced what he described as “casual student life spaces,” including a large multipurpose room, music practice rooms, classrooms, and a terrace, which he envisions as a venue for everything from formal meetings to casual studying. Throughout the process, Kieran and administrators solicited student input on the designs through focus groups, surveys, and student involvement in the House Program Planning Committee. With more space specifically tailored to their needs, students will be able to convene and spend time together in ways they could not have before.

Despite the incorporation of additional common space into the renovation plans, some students said that their need for private space is being neglected.

For these students, the flip-side of the cluster community is the lack of a private common room—a place where they can hold social gatherings and parties on their own terms.

Yim, who toured a mock-up of a room in renovated Old Quincy last year, said he would not have wanted to live in a cluster community during his time as a Quincy resident without control over his common room.

During his sophomore year, Yim lived in a three-room triple in Old Quincy. Despite having to use the common room as a walk-through, Yim and his roommates liked the set-up.

“I loved the way that Old Quincy was laid out before. I liked having the option to choose whether or not you wanted to use it as a walk-through,” Yim said. “I think that versatility was great.”

Administrators seem to have a less clear vision of how students will be able to host social events with much less private space.

“And as far as partying, they always seem to find a party someplace,” said Quincy House Master Deborah J. Gehrke, when asked about the availability of party space when House renewal is complete. She specifically referenced rooms on the sixth floor of New Quincy, which are often host to parties on weekend nights.

Administrators said that cluster communities, where hallway common rooms can be locked by residents, will function and feel like suites of their own.

“The cluster will feel like a community in its own right,” said Kieran, adding that fireplaces and study nooks will line the hallways and create a cozy feel.

Students who toured the nearly-complete construction site agreed that the short hallways connecting vertical entryways do not feel like the long, anonymous hallways found at some colleges.

Lassonde, who served as a dean of one of Yale University’s 12 undergraduate residential colleges when they were undergoing renovations, argued that improved public and private spaces are not mutually exclusive. “When you look at the ratio of public to private space, it looks like there’s an encroachment of public space on private space, but what happens is there’s just much more public space,” he said.

Students and administrators alike agreed that House renewal should aim to improve community spirit and life, but some students questioned whether the project will achieve that goal.

“While I think that the hallways and the new common spaces will facilitate the vision that a lot of the leaders in the House have, I don’t know if, because of the common rooms or the hallways, you’re going to see blossoming House spirit,” Katz said.

Leverett House Committee Co-Chair Manny M. Mendoza ’14 said that there will always be a group of students committed to cohesion in the House, regardless of spatial issues. “We always have a solid core of people who are always interested in maintaining an active community,” he said.

Still, Mendoza said he is concerned with preserving community life during construction on McKinlock Hall, the neo-Georgian portion of Leverett where the second set of House renovations will begin this summer. During the renovations, Leverett students will live in five different buildings for the school year.

“I don’t know how [House life] is going to survive,” he said.

“I think Harvard in general has had a challenge in social space in recent years and that discussion is being presented in front of administrators,” Yim said.

He added that new spaces in the Houses could end up as just more under-utilized space.

“I do think that [the issue of social space] is much more nuanced than just adding new amenities and just renovating a building,” he said. ”I do think it is steps forward. I don’t think there’s a simple solution.”

—Staff writer Laya Anasu contributed to the reporting of this article.

—Staff writer Elizabeth S. Auritt can be reached at eauritt@college.harvard.edu. You can follow her on Twitter @eauritt.