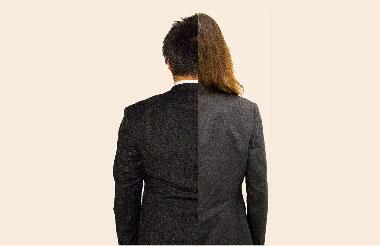 Part III of a three-part series on gender disparity issues at the Law School. Part I ran on May 6, and Part II ran on May 8.

The law firm Brune & Richard is an anomaly. In a world where female lawyers represent fewer than 20 percent of partners in private practices, women make up 12 of the 18 lawyers at Brune & Richard.

And for founder Hillary Richard, who graduated from Harvard Law School in 1988, that number makes a difference.

But when female students graduate from the Law School, most must grapple with the large gender gap in the legal profession, especially at the level of the most prestigious positions. According to a Feb. 2013 report by the American Bar Association, fewer than one-third of federal and state judgeships are filled by women, and only 15 percent of equity partners in law firms are female. Just 21.6 percent of general counsel at Fortune 500 companies are female lawyers, and women make up barely one-fifth of all deans in U.S. law schools.

Harvard Law professor David B. Wilkins ’77, an expert on the legal profession, said he thinks this severe gender disparity creates a vicious cycle that prevents many women from moving up in the field.

“I think it’s true as in many other places in society,” he said. “If people see people like themselves succeeding, they are more likely to succeed.”

At Harvard Law School, where fewer than one in five professors is female and women are regularly outperformed in the classroom by their male counterparts, graduating students are not immune to the pressure of entering a field dominated at the top by men.

A “FEMINIZED” PROFESSION, BUT NOT AT HARVARD

“Law is becoming a feminized profession, by which I mean the majority of the entrants to the profession are women,” said Wilkins, who described the breakdown in the United States as “50/50,” whereas worldwide “women make up the majority.”

Yet one would never get that sense from the campus of Harvard Law School.

More than six decades since the first women were admitted to the school, female students have never made up 50 percent or more of a class, according to Assistant Dean and Chief Admissions Officer Jessica L. Soban ’02, a former Crimson business editor.

A gender disparity is especially apparent in the most prestigious extracurricular activities, where women succeed in smaller numbers than their male peers.

According to Yvonne L. Smith of the Dean of Students Office, twice as many men as women made it to the semi-final round of the Ames Moot Court competition, a prestigious mock trial held annually by the school, and only nine of the 44 most recently elected editors on the Harvard Law Review have been women.

Valerie Duchesneau, director of student organizations on the Student Representative Board, pointed out that while most journals at the Law School have many women on staff, the Law Review is different.

“For me that’s why that statistic says something about there being a real problem,” said Duchesneau. “Somehow the Law Review gets a lot of the prestige that these other journals don’t carry.”

The gender gap at the Law Review is nothing new.

“When I was a student here from 1994 to 1997, I took the Law Review competition in the spring of 95, and of the 40 to 42 people who made the Law Review that year, only nine of us were women,” said visiting professor Laura A. Rosenbury ’92 in a video released by Shatter the Ceiling, a new coalition to address gender disparities. “I assumed when I came back to the faculty this year, that the Law Review would be close to 50/50. And it’s not.”

Students and faculty said there is no clear answer as to why certain extracurricular activities end up disproportionately male. The Harvard Law Review this year implemented a new gender-based affirmative action policy in an attempt to counteract the gap.

“There is, for lack of better terms, a hierarchy in terms of extracurriculars on campus,” said third-year Harvard Law student Stephanie E. Davidson, outgoing president of the Women’s Law Association.

TROUBLE AT THE TOP

And while the problem might start with student activities, it extends into the job market. Many in the Law School consider certain activities like the Law Review and Ames Moot Court to be important lines on the resume when securing top jobs after graduation.

Female graduates at the Law School find positions at private law firms less often than their male peers, according to Assistant Dean for Career Services Mark A. Weber. At the same time, he said, women tend to enter public interest work in greater numbers than men.

Nationwide, women make up 19.9 percent of partners in private legal firms, according to the American Bar Association.

Visiting professor Daniel R. Coquillette said that part of this disparity can be attributed to the fact that large law firms have “never made the accommodations they should make to family life.”

“I was an associate in a big law firm and I’ll tell you, it really is a very, very tough existence,” he said. “You might say that they treat men and women equally. And that’s true, they make it difficult for everyone, but under the conditions of modern society, it impacts women more.”

Wilkins agreed that typical legal careers, particularly at law firms where the key years in which lawyers become partners coincide with the time when many choose to start a family, are “not just made for a man but made for a man whose wife doesn’t work.”

“In a profession in which human capital is at its core, we are systematically losing out on the talent of very talented female lawyers who are leaving the profession altogether sometimes,” he said.

Wilkins helped co-author a study entitled “After the JD,” in which researchers surveyed lawyers in 2008 who had entered private practice in 2000. They found that at large law firms of 250 or more, men were five times more likely to have been made equity partner than women.

Weber said that while the statistics at the level of the top positions might paint a troubling picture, firms who hire HLS graduates soon after graduation treat candidates equally regardless of gender.

“What we’ve seen on the output side is that employers just want to hire smart, talented students,” he said. “It’s never an issue of gender. I’ve never seen employers say ‘We want to hire men.’”

“Whether they be clients or partners, when they think about a successful lawyer they are less likely to think of a female lawyer,” he said.

Richard said she thinks this issue is rooted in the low number of female partners. With a small number of women at the top, female job applicants find it harder to imagine their own success.

“I think with anything else, the more diversity that you have, whether its gender or race or what have you, I think the more it opens your mind to the possibility no matter who you are that there are jobs and careers open to you,” said Richard.

In lower courts, women fill more clerkship positions than men, according to Weber. But that dynamic changes at the level of the top positions. Among HLS graduates, far more men secure clerkships at the Supreme Court than women, a statistic often cited by the Shatter the Ceiling coalition.

“The higher you go in the profession, whether its Supreme Court Justices, partners in law firms, or deans of law schools, the number of women is smaller,” Dean of the Law School Martha L. Minow said. “It’s not just Harvard Law School’s problem, it’s the legal profession’s problem.”