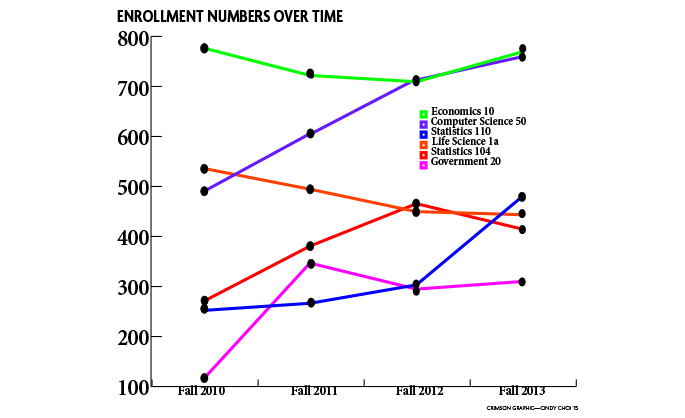 Ec 10a was Harvard's highest-enrolled course this semester, narrowly beating out the rising CS50.
By Pooja Podugu, Crimson Staff Writer

“We're thrilled that so many students have been taking an interest in computer science,” Malan wrote in an email Wednesday night.

While Malan did not venture to speculate why so many students opted to take the course, he wrote that he and his teaching staff have “endeavored to build within CS50 a support structure atop which any student can succeed, irrespective of background.”

In another story of dramatic growth, statistics professor Joseph K. Blitzstein’s Statistics 110: “Introduction to Probability,” experienced a 56 percent increase in enrollment from last year, growing from 308 to 482.

Ec 10a, formerly known as Ec 10 prior to a listing change, remained Harvard’s most popular fall course for the third year running.

The course’s head teaching fellow, Nuri Kim, had a slightly different take on the course’s popularity, pointing to Puett’s “outstanding” and “effortless” lectures and his growing reputation.

Blitzstein, the Statistics 110 instructor, pointed to the applicability and elegance of his course material as explanations for the course’s high enrollment.

“I think there is an increasing realization, both at Harvard and internationally, that data are everywhere and statistics is needed everywhere there is data!” he wrote in an email. “I think [the increase in interest] reflects the fact that statistics is both aesthetically beautiful and intensely useful.”

Feiman also pointed to both men’s bestselling books, media appearances, and general renown outside Harvard, as well as the appeal of the discipline of psychology, as explanations of student interest in the course.

Steady growth seemed to be the trend among many of Harvard’s perennially popular courses. But as computer science and statistics classes become increasingly popular, life sciences has experienced a slow but steady decline. Life Sciences 1a, Harvard’s introductory biology and chemistry course, has experienced a nearly 20 percent decrease in enrollment over the past three years, shrinking from 537 in 2010 to 448 this year.