The Class of 2017's Academic and Extracurricular Lives 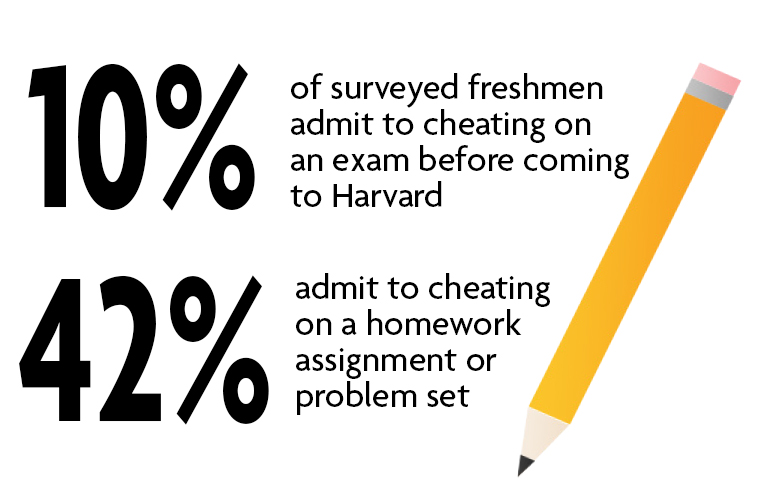 Part II of a four-part series on Harvard’s incoming Class of 2017, based on data collected by The Crimson in an online survey conducted in the month of August. Part I ran on Tuesday, Part II ran on Wednesday, and Part IV will run on Friday.

After going public a year ago with their investigation into Harvard’s largest cheating scandal in recent memory, administrators went to great lengths to promote a culture of academic integrity in the Harvard community.

But the results of a Crimson survey of the Class of 2017 conducted last month suggest that some of the newest members of that community are already guilty of academic dishonesty.

Ten percent of respondents admitted to having cheated on an exam, and 17 percent said they had cheated on a paper or a take-home assignment. An even greater percentage—42 percent—admitted to cheating on a homework assignment or problem set.

The Crimson’s survey of the Class of 2017 generated responses from more 1,300 incoming freshmen—nearly 80 percent of the class. Part III of a four-part series on the results of the survey focuses on the academic and extracurricular lives of freshmen.

Recruited athletes were not the only demographic to be more likely to cheat. Men were more likely than women to report having cheated. Male freshmen were twice as likely as their female counterparts to have cheated on an exam and one-and-a-half times more likely to admit to cheating on a paper or take-home assignment.

Despite the number of freshmen who admitted to academic dishonesty, their responses indicate that they overwhelmingly expect to prioritize academics at Harvard. Eighty-four percent of respondents put academics first when asked to rank their anticipated priorities among academics, extracurriculars, varsity sports, paid employment, and social life. Not a single respondent put academics at the bottom of their list.

The academic interests of the new freshman class were not always consistent with concentration numbers at the College. Twenty-six percent of surveyed freshmen said they plan to concentrate in economics or government, the two most populous concentrations at Harvard that represent 21 percent of current Harvard concentrators. And not a single freshman expressed plans to study African and African American Studies, Germanic Languages and Literatures, or South Asian Studies.

And just three months after a faculty committee released a set of reports advocating the revitalization of the study of the arts and humanities at Harvard, just 11 percent of surveyed freshmen said they plan to concentrate in that discipline. That figure is even lower than the current percentage of arts and humanities concentrators, who already make up just 16 percent of the student body.

In comparison, 58 percent said that they studied for 19 or fewer hours in high school. However, pre-college study habits varied widely between respondents who went to public and private secondary schools. Only 17 percent of students who attended a non-denominational private school said they studied for 10 or fewer hours a week, compared to 39 percent of public, non-charter school students.

Although a large majority of respondents ranked academics as their anticipated highest priority for college, a plurality—40 percent—ranked extracurriculars second, and another 35 percent ranked it third.

Surveyed freshmen were also enthusiastic about their secondary school extracurriculars. A large majority—84 percent—were involved in community service in high school. Also popular were music clubs/bands and student government, at 39 and 37 percent, respectively.

But not all freshmen obtained a top leadership role in their extracurriculars—19 percent led zero clubs.

One particularly popular high school extracurricular was athletics. Sixty-nine percent of surveyed freshmen reported being involved in athletics in high school, but just 12 percent of respondents were recruited to play a varsity sport at Harvard. An additional 9 percent of the class planned to walk on to a varsity team at Harvard.

Three quarters of freshman athletes, including both walk-ons and recruits, said they were likely or very likely to play their sport for all four years. However, recruited athletes were more likely than intended walk-on athletes to envision themselves graduating as four-year athletes, coming in at 93 and 47 percent, respectively.

Twenty-two percent of incoming recruited and walk-on athletes reported having received at least one concussion while playing a sport. Of those, two-thirds said they had been concussed once. But for most, these experiences did not dissuade them from playing their sports. Just 5 percent of all athletes and 19 percent of those who had been concussed from sports said they felt that concussions had affected their approach to their sport or desire to play that sport.

Athletes and non-athletes reported differing academic backgrounds. Coming into Harvard, 33 percent of incoming recruited athletes said that BC Calculus was the highest level of math they had completed prior to college, compared to 43 percent of non-athletes.

Athletes also expressed different academic plans for Harvard than their non-athlete counterparts. Although the “Gov Jock” is a commonly referenced stereotype among Harvard students, just one incoming recruited athlete expressed plans to concentrate in government. In comparison, 11 percent of non-athlete respondents were interested in becoming government concentrators.

On the other hand, economics, the most popular concentration among Harvard students, was disproportionately represented among incoming recruited athletes. Thirty-two percent said they expect to become economics concentrators, compared to 15 percent of non-athletes.