Dean of the School of Public Health Julio Frenk and University Professor Lawrence H. Summers appeared together on Tuesday afternoon to discuss a path forward for advances in public health, particularly in developing countries.

Before an audience of about 100 in a Science Center lecture hall, Summers opened the forum by recapping a 2013 report titled “Global Health 2035: A World Converging Within a Generation,” which he authored with a group of economists and health experts. The report outlines a roadmap for investments in public health in the next twenty years.

Summarizing the report’s main conclusion, Summers emphasized that if nations come together to make certain relatively affordable investments, rates of child and maternal mortality, as well as infectious disease, could drop to record lows.

“It is possible in the next generation, by 2035 [to achieve] rates of child mortality all over the world that are comparable to the rates of child mortality in the United States and Great Britain when many of the students in this room were born,” Summers said, highlighting a potential convergence of outcomes in these areas between developed and developing countries.

Summers, who said that his economic and policy training gives him a fresh perspective to bring to the public health conversation, stressed that he believes much of the recommended investment—$70 billion per year—can be found in the rapidly growing economies of developing countries.

That money, Summers said in a reference to the report, could save about 10 million lives annually in low- and low-middle income countries.

The economist concluded by urging action.

“The World Health Organization’s budget for pandemics is about a third as large as Harvard’s athletic budget,” Summers said in conclusion. “This is not how it should be.” 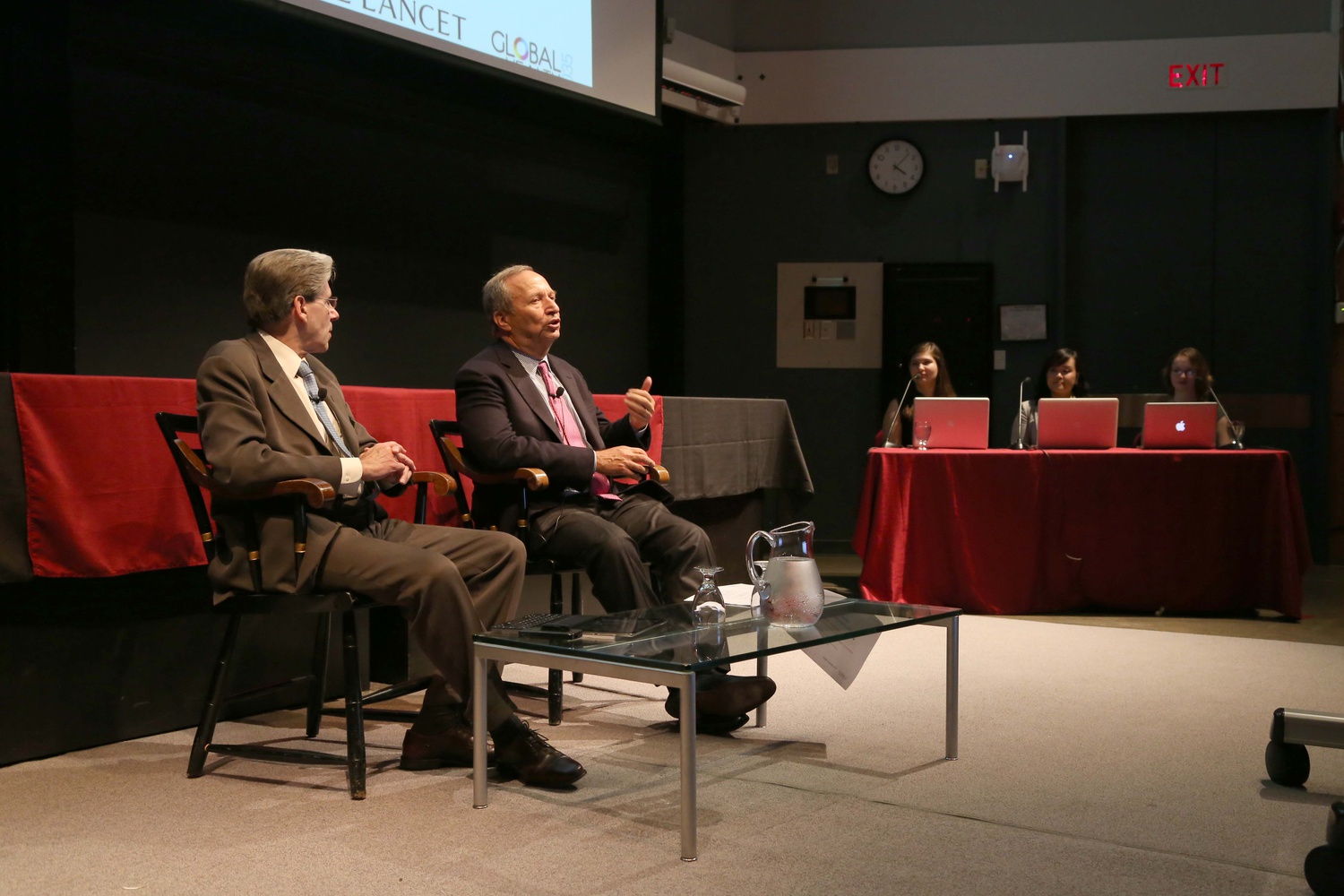 Dean of the Harvard School of Public Health Julio Frenk, left, listens as former University President Lawrence H. Summers, center, speaks about global health during a discussion on the topic in the Science Center on Tuesday afternoon. By Madeline R. Lear

Following Summers’ recap of the 2013 report, Frenk delivered brief remarks, partly in response to prepared questions from three fellows with the Franklin Delano Roosevelt Foundation, the Adams House-affiliated program which hosted the event.

Frenk focused on hailing the 1993 World Development Report, the groundbreaking global health document that was the precursor to the Global Health 2035 report up for conversation on Tuesday.

“It was the first international document that made the case that health is an investment,” Frenk said, adding that it was critical that the report was published by the World Bank. “Presidents and chairs of central banks reading about health was very important, and I think [the 1993 report] has launched a process of change that was...very positive.”

After the question period, the event concluded with a recorded message from University Professor Paul E. Farmer, who is in Liberia aiding the fight against Ebola. Farmer also urged greater investment in public health.

“We need strong health systems to protect everyone, especially the poor and vulnerable,” he said. “Sitting here in the city of Monrovia in Liberia we can see that Ebola has shaken the basic primary health system and caused it to collapse. We need stronger systems that won’t collapse, and these are going to require significant public investments and private investments if we’re going to stop Ebola or other problems we haven’t seen yet.”