"St. Vincent" Is Daring But Human 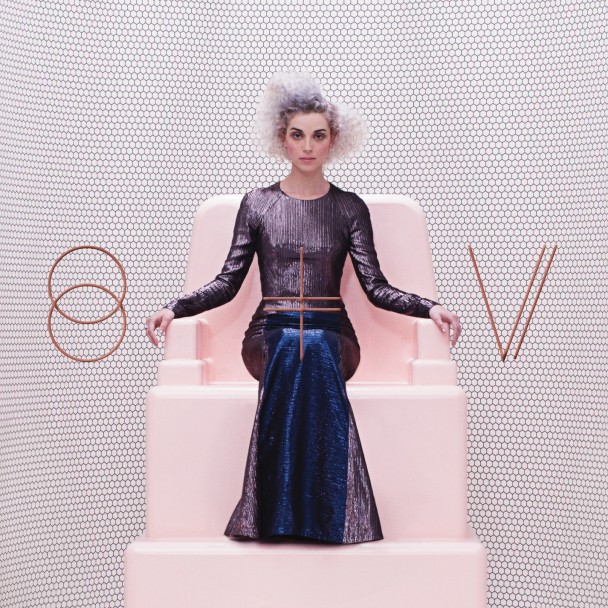 Just seconds into her fourth album as St. Vincent, Annie Clark walks out into the desert and takes off her clothes. “Sweatin’, sweatin’ / No one will ever find me,” she sings over the glitchy synths and filtered guitars of the opening track, “Rattlesnake.” Clark knows quite well this is a false isolation; she’s leading you by the hand out to that same desert where she allegedly did, indeed, strip down and bask in the sun—at least until a real serpent chased her, naked, all the way home.

The new St. Vincent album, her self-titled major label debut, won’t tell you an awful lot about who Annie Clark is. It’s a far cry from the lush chamber pop of her early days—more raw-sounding, groove-based. And while sometimes intimate, it’s just strange and creepy enough to keep you from getting too close. Even so, it’s possibly Clark’s most fully realized musical self-portrait yet. There’s a sense that everything’s unfettered here—her dark and crazy side, her roaring guitar chops, her desire to simply have fun—and at the same time, the album never loses the cleverness and meticulous songwriting that has made St. Vincent so compelling throughout her seven-year solo career.

Much of Clark’s music explores the intrinsic beauty of darkness and rage. For the first half of “Huey Newton,” she guides us through one of the most enthralling lyrical landscapes she’s painted, an Ambien-induced digital dream world populated by “cowboys of information” and “blind psychics / turned online assassins.” It’s not a comfortable listen; Clark’s gentle vocals clash with sustained dissonant synths, a lone synth line looped ad nauseam in the background only adding to the haunted aesthetic. When the clouds finally part, Clark’s voice soaring over shimmering major chords, it seems that the spell has finally reached full power, until suddenly, without warning, this heavenly climax is interrupted by a thundering guitar riff. For the rest of the song, now a swaggering rock jam, Clark ditches the smooth crooning and conjures up a millennial facsimile of Robert Plant, theatrically depicting “a shrine / of zeroes and ones” over fuzzy blues licks and wavering vocal pads.

Fascination—and disgust—with the technologically saturated world is not unique to the “zeroes and ones” of “Huey Newton.” On “Digital Witness,” Clark rails against living life through a computer screen, backed up, appropriately enough, by a punchy synth sax section. Where it could have been preachy, the song is instead amusingly sardonic; Clark relishes the role of digital overlord, feistily declaring, “I want all of your mind.”

Perhaps in line with her skepticism of technology, the album deviates most from Clark’s previous work through its visceral liveliness. More than any of her other albums, even the guitar-and-synth-heavy “Strange Mercy,” “St. Vincent” is charged with electrical energy and driven by idiosyncratic dance beats. Dap-Kings drummer Homer Steinweiss, a new addition to the St. Vincent crew, is a major player here: lead single “Birth In Reverse” builds its complex guitar work up from a pounding bass drum, while “Bring Me Your Loves” is a New Orleans second-line march made delightfully demonic. It’s not hard to hear the influence of Clark’s recent collaborator David Byrne in the groovy freakiness of it all, but structurally and melodically, these are St. Vincent songs through and through.

Yet as hard as it is to find fault with an album so loaded with invention, there’s a lingering sense that something has been lost since the days of Clark’s early work. Back on her 2007 debut, “Marry Me,” Clark, fresh off tours with Sufjan Stevens and the Polyphonic Spree, made music that dripped with heart, imbued with a beauty that felt jarringly real. She was never just another cute singer-songwriter, which made her sometimes-grave, sometimes-frightening songs feel worthy of their silky, woodwind-heavy orchestration. The crackling electricity of “St. Vincent” may be infectious, but will we ever again see the Annie Clark who played intimate duets with Andrew Bird and Justin Vernon, who took her guitar out into the streets of Paris and sighed her way through songs on a park railing?

It’s probably time to get used to the new St. Vincent, a silver-haired goddess who stares icily from her pink plastic throne on her album cover. But just when you least expect a vulnerable moment from her, Clark hits you with something like “Severed Crossed Fingers,” the unabashedly sentimental power ballad that closes the album with chiming harpsichord arpeggios and rich choral accents.

“You stole the heart right out of my chest,” she sings, reaffirming her naked humanity even as rubble and the guts of sundered bodies lie strewn around her. And it’s at this moment, seeing her clearly through the smoke, that you realize you’ll never stop loving Annie Clark. Not if it’s the scariest thing in the world.