Jazz and Its Discontents

A Jazz Musician's Reflections on the Cult of Wynton Marsalis 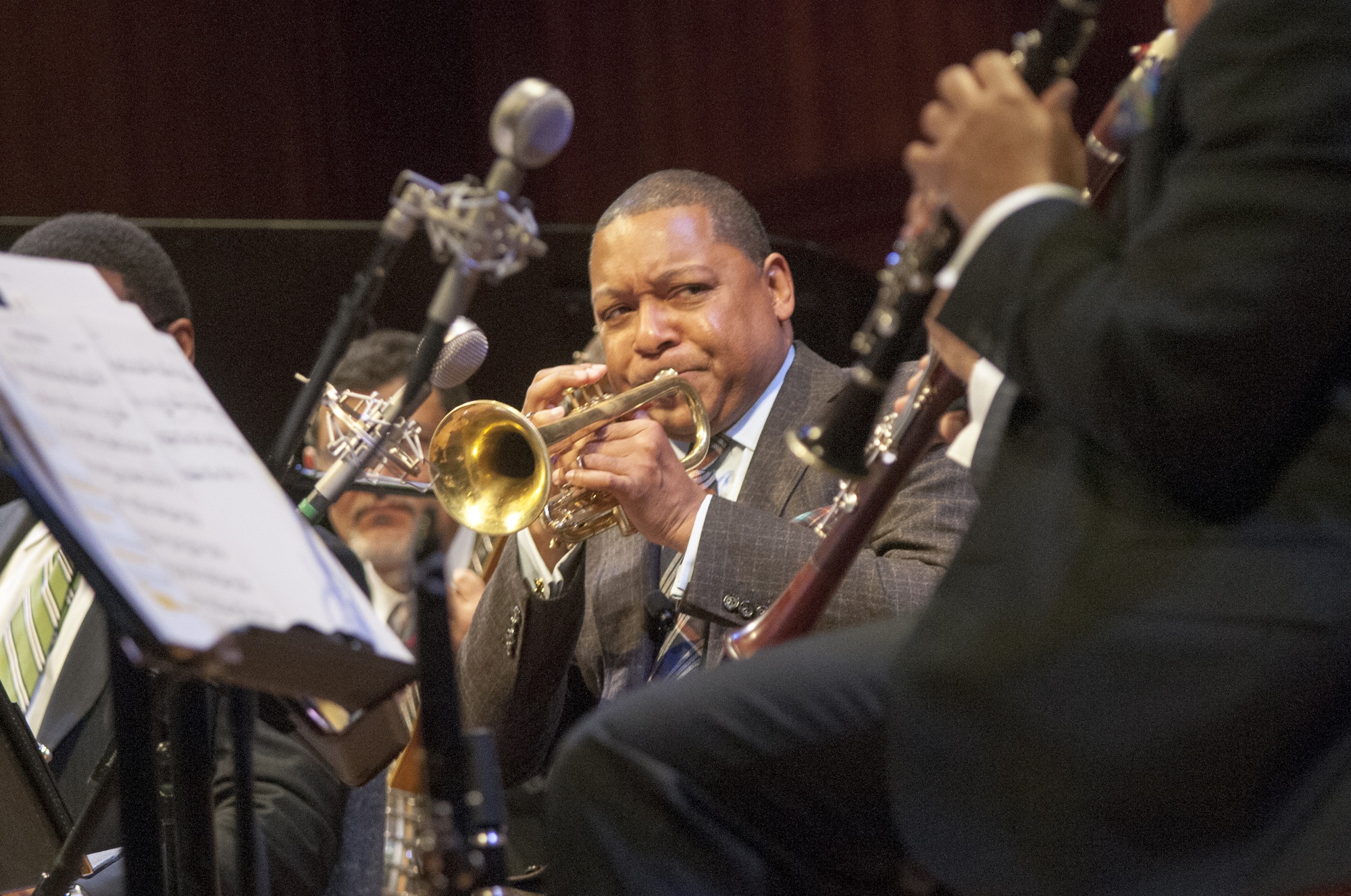 Wynton Marsalis finished his lecture series with a history of jazz from his hometown, New Orleans, Louisiana, on Thursday night, Jan. 30, in Sanders Theatre.
By Kevin Sun, Crimson Staff Writer 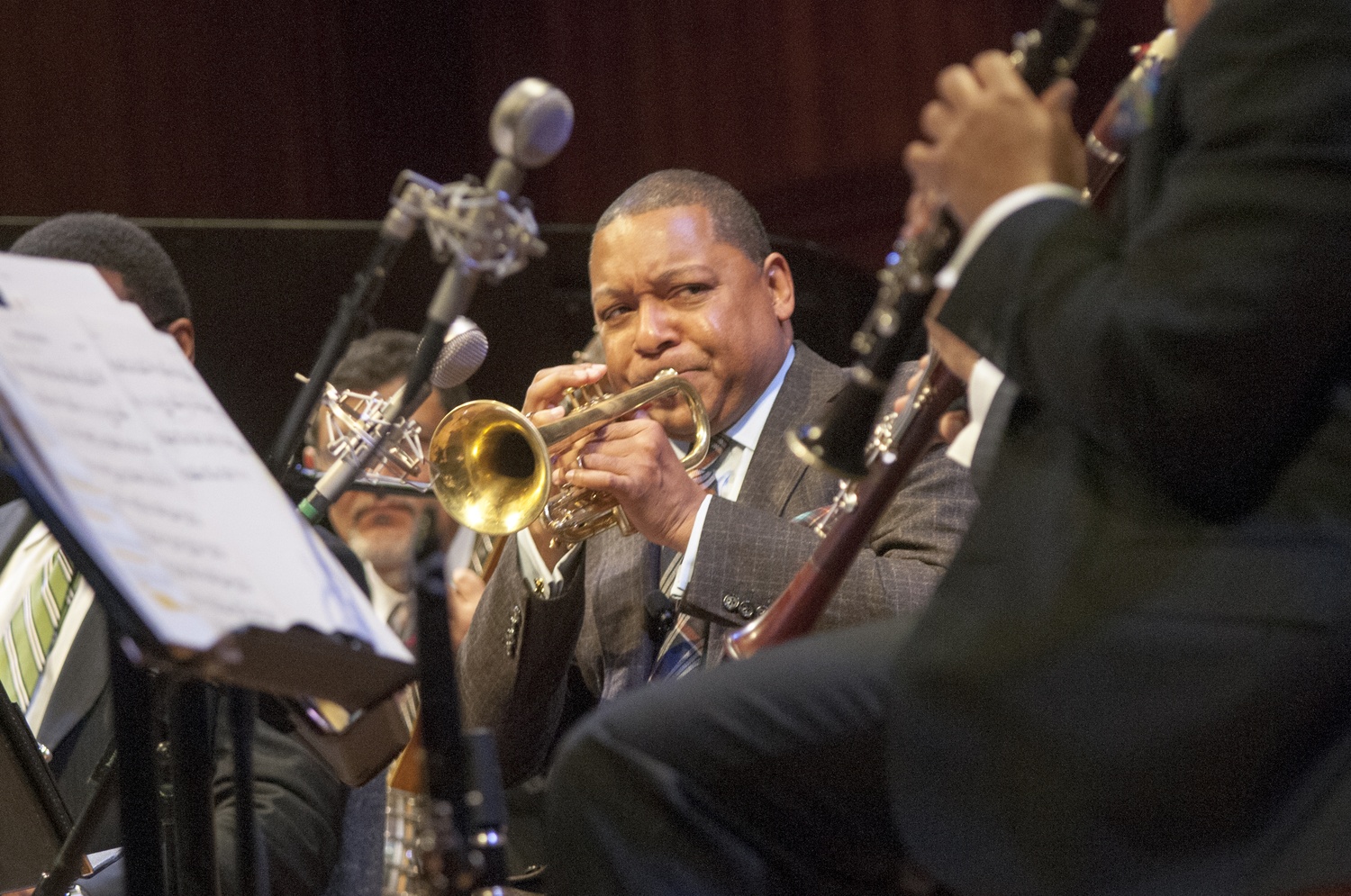 Wynton Marsalis finished his lecture series with a history of jazz from his hometown, New Orleans, Louisiana, on Thursday night, Jan. 30, in Sanders Theatre. By Robert F Worley

Last Thursday, Jan. 30, in Sanders Theatre, 18 politely dressed, middle-aged or middle-aged-plus lecture-goers held up crimson placards to declare in no uncertain terms, “HARVARD LOVES WYNTON.” At the conclusion of the lecture three hours later, the declaration returned: “HARVARD OVES WYNTON,” the signs read, until a weary, jazz-saturated attendee located the missing letter and restored it to its rightful place.

Like past Marsalis lectures, there was a lot to take in: the relevant pre-American history of Louisiana, technical differences between the performance practices of contemporaneous New Orleans bands, and so forth. While I was listening, I couldn’t help but think that these lectures were meticulously designed to be a hit at Harvard: jam-packed with facts and anecdotes; sprinkled with jokes and clever, if at times corny, turns of phrase; interdisciplinary, using musical performance and analysis to teach American cultural history; and allegorizing jazz to prove its place as fundamental to America itself.

As a student of jazz, however, I can’t help but feel deeply ambivalent seeing Marsalis at Harvard. At times, this feeling is spurred by the fact that so many fellow lecture-goers don’t share any such ambivalence or skepticism. As I have seen, “HARVARD LOVES WYNTON.”

My first exposure to Marsalis was through Ken Burns’ 10-part, 1140-minute documentary series “Jazz” (2001), which my parents, longtime NPR devotees, gave to me for Christmas in middle school when I first became serious about learning this music. Watching Marsalis talk in the documentary, I remember being impressed in particular by his enthusiasm for Duke Ellington, Louis Armstrong, and the other greats in his account of jazz history.

This was long before I was warned by older musicians about how “Jazz” omitted the contributions of many innovative, significant musicians; before I read other prominent musicians’ criticisms of Marsalis’ playing (e.g., pianist Keith Jarrett: “Wynton has no voice and no presence,” or trombonist and composer Bob Brookmeyer: “If Wynton died tomorrow he wouldn’t leave us one note on paper or on record that’s worth anything”); and before I had heard the claim that Marsalis, as head of Jazz at Lincoln Center, was actively freezing jazz into a museum music by advocating and preserving older sensibilities about jazz playing at the cost of newer, more exploratory approaches.

For a couple years, I avoided all things bearing Marsalis’ name like the plague. I wanted to be part of the solution, not the problem. But it wasn’t until my senior of high school, when I heard him play—really play, with the fire of a young man with much to prove—on “Standard Time, Vol. 1” (1987), that I realized my mistake: I’d spent far more time consuming received wisdom about the musician than forming my own opinion about him.

Unlike older musicians I’ve spoken to, most of my peers have a relatively moderate, consciously distant opinion of Marsalis, something along the lines of, “He’s a killing trumpet player, absolutely, but I don’t agree with all his views on music.” Among my trumpet-playing friends, he’s certainly not the most influential in stylistic terms (“Now, the genius is the one everyone is imitating,” Marsalis said during his lecture)—far younger trumpeters like Ambrose Akinmusire would be contenders for most evidently influential. But Marsalis, I think, has been one of the most influential musicians for me.

Although I haven’t learned any of his solos or tried to emulate his compositional approach, because of Marsalis I’ve learned that there is no disinterested criticism—that works of art often can and should be understood in ideological terms, either as part of an argument or belief buried beneath the surface—and that we as jazz musicians have a responsibility to formulate our own understanding of this music’s history and not take others’ historical narratives for granted.

At first, I balked when I had heard that Marsalis was to present six lectures at Harvard about jazz and its history. He seemed a safe choice, the one most likely to please the broadest audience. I realize now that I was wrong: Wynton Marsalis, because of the political and musical baggage that he carries, was actually one of the most controversial choices. He made and still makes the jazz community argue, often divisively and heatedly, about authenticity, tradition, and the future of the music. I have no problem with Harvard loving Wynton, but I’d just like Harvard to consider why they love him, and whether there’s more to the story than is apparent after a first listen.

Postscript: For the uninitiated who haven’t read about the time Miles Davis told Marsalis to “get the fuck off” the stage at a major jazz festival, or heard about how some critics claim that Wynton was destroying jazz and its future in the ’90s and ’00s, or seen a young, arrogant Marsalis dissing abstract painting and modern classical music, I strongly recommend the following as a primer to the controversial side of Wynton Marsalis:

—“Between Image and Artistry: The Wynton Marsalis Phenomenon.” Nicholson, Stuart. Is Jazz Dead? (Or Has It Moved to a New Address). Routledge: New York, 2005.

—Staff writer Kevin Sun can be reached at ksun@college.harvard.edu