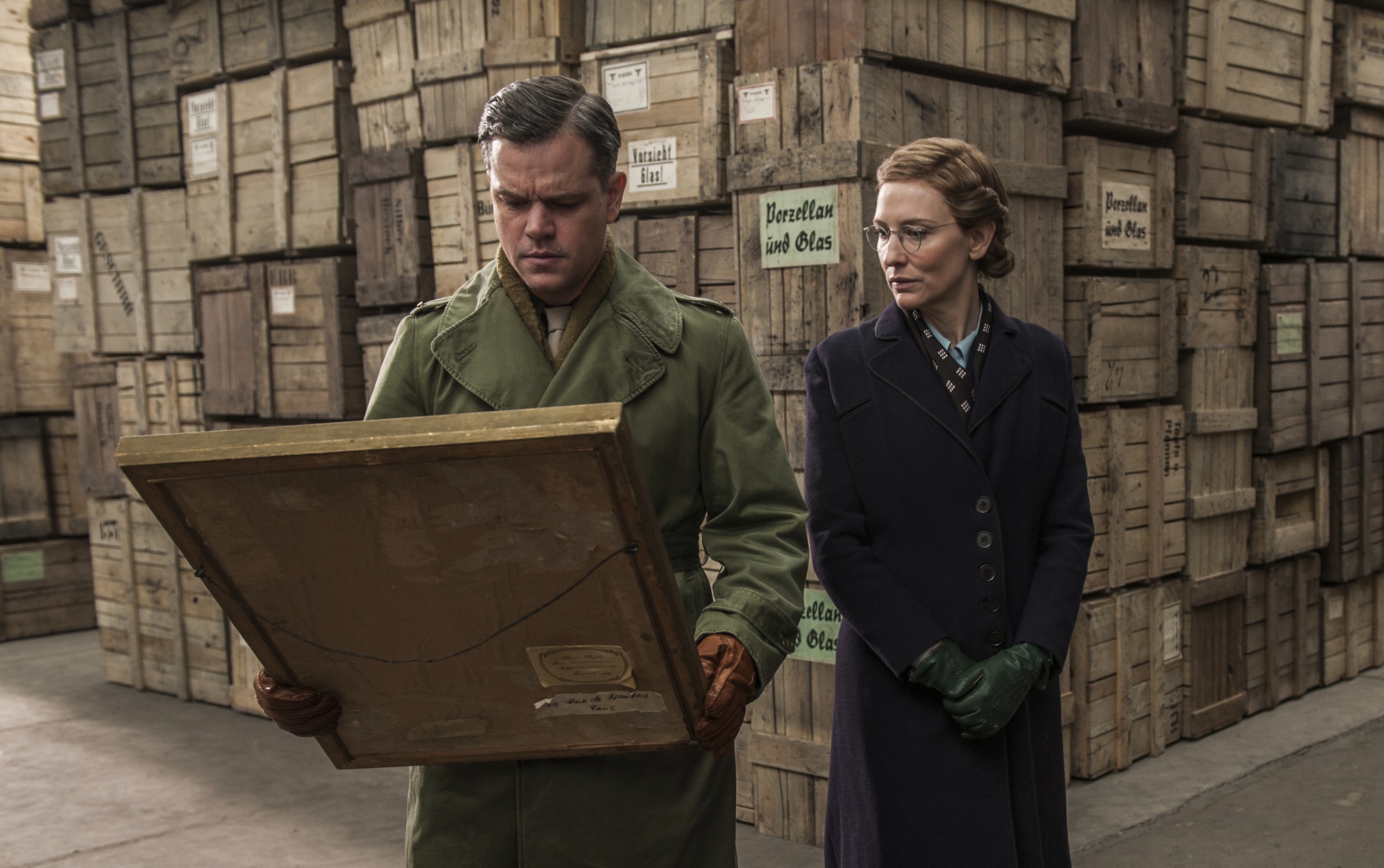 In a train warehouse in Paris, Granger (Matt Damon) picks up a painting with Claire (Kate Blanchett). By Courtesy Columbia Pictures
By Tree A. Palmedo, Crimson Staff Writer

About a quarter of the way into “The Monuments Men,” Frank Stokes (George Clooney, a moustache transplanted onto his usual sexy stubble) radios the rest of his crew with a pep talk of sorts. They may not be trained soldiers, he says, and the army may not be behind them, but their mission—to trek through war-ravaged Europe, saving art from the Nazis who stole it—is worth every risk. After all, what is a country, a culture, without its art?

This is a laudable message, and a relevant one considering the shaky ground on which the arts rest in today’s economic climate. It’s just a shame that the message has to be delivered via “The Monuments Men,” perhaps the worst film George Clooney has ever directed. It may seem like a delight on the surface, but don’t let the snappy pace and absolutely loaded cast fool you; the film is, at its core, a sloppily told story and a tonal mess.

The premise seems appealing enough: Clooney’s Stokes, an art conversation expert based on the real-life George L. Stout ’29, is assigned to travel through late-WWII Europe to locate and return stolen art objects, among them van Eyck’s “Ghent Altarpiece” (Stokes calls it “the very foundation of modern society,” so you know the stakes are high). For backup, he recruits a motley crew of fellow art experts, starting with Matt Damon ’88-’92 as Metropolitan Museum curator James Granger and continuing on with a cadre of characters played by Bill Murray, John Goodman, Jean Dujardin, Bob Balaban, and Hugh Bonneville.

Plugging a WWII scenario into the “Ocean’s Eleven” formula must have looked great on paper, but unfortunately for this film, Clooney lacks Steven Soderbergh’s knack for handling large casts. The mismanagement begins with the opening credits, which double as a recruitment montage. Where “Ocean’s Eleven” used these short scenes to introduce key attributes of its players, the “Monuments Men” montage plays wordlessly, simply showing Stokes approach his recruits and then cutting quickly to them donning their uniforms. While they’re admittedly first seen in different settings, it would be impossible to differentiate these men without the famous faces inhabiting them, as their characters are relatively undeveloped. There’s no struggle at all convincing anyone to enlist, since none of the recruits seem to have homes, families, or really any sort of backstory.

Once the plot gets moving, there’s a vague goal—saving as much art as possible—but the film mostly feels like a series of vignettes, with the team splitting up and heading across Europe. And while this fragmentation works from time to time, the segments often feel jumbled. Clooney seems lost in the shuffle for most of the film, so he gets a clumsy voiceover to keep him established as the main character. The real fumble, though, comes with the portrayal of Claire Simone (Cate Blanchett, whose best shot at a French accent is…okay). For some reason, her story is interspersed among the beginning of Stokes’s mission even though it seems to take place years earlier. And though she begins the film a potential protagonist with her own story, once she crosses paths with the Monuments Men , or really just Damon’s Granger, she is reduced to little more than a love interest and plot device.

Despite the film’s confused structure, the vignettes can be quite effective when taken on their own, especially when the fine cast members are allowed to flex their comedy chops. Goodman and Dujardin can ham it up with the best of them, but it’s obvious that the writers saved the strongest of what little material they had for the duo of Murray and Balaban. In a scene particularly rife with deliciously funny tension, the pair’s encounter with a young German private leads to a riotous stand-off—which soon devolves into more of a sit-off—with Murray’s expert deadpan counterbalancing Balaban’s twitchiness. It’s a special delight to see Balaban, who last stole the show as the narrator in “Moonrise Kingdom,” getting solid screen time and some tasty jokes to boot.

The problem is that the movie just isn’t funny enough to warrant its silly tone. Many jokes, like Granger’s inability to speak French, are stretched too far, while others simply fail to land. It would have been a better use of energy to flesh out the promising dramatic threads in the film, like the story of Bonneville’s character, Donald Jeffries, who has a particularly touching personal connection to the Michelangelo “Madonna and Child.” Tragedy and tension are present in the film, but the balance is off, and the finale, though perhaps true to life, is a clockwork anticlimax.

“The Monuments Men” is an entertaining enough film, but it’s too fun a romp to ever feel like it matters much, and part of this could be its laser-like focus on the experience of middle-aged art geeks. Where it could have said something meaningful about art and the societies of war-torn countries, the film instead offers Matt Damon looking at a sculpture and exclaiming, “Holy shit.” The real-life monuments men were bona fide heroes who stood up for culture in its time of need. What’s most disappointing about Clooney’s film is not that it fails to do the same, but that it barely even tries.